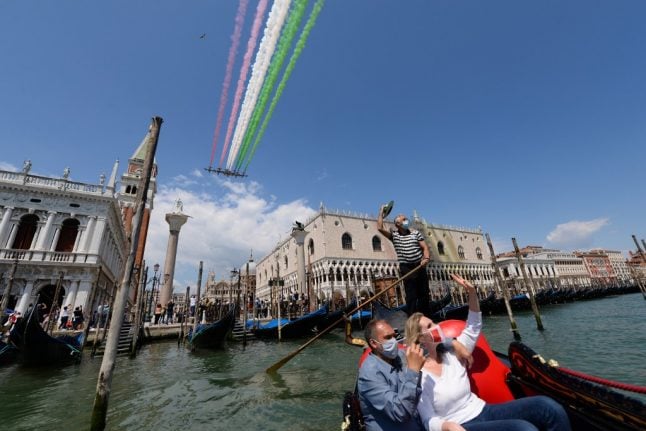 People taking a gondola ride and a gondolier wave as the Italian Air Force acrobatic unit Frecce Tricolori (Tricolored Arrows) perform on May 29, 2020 over Venice. AFP

The latest figures in Italy continue to show a downward trend in new cases as it prepares the next stage of its gradual easing of a national lockdown, after nearly 33,500 people died over three months from COVID-19.

Italians were celebrating Republic Day with “feelings of uncertainty and reasons to hope,” Mattarella said.

“The crisis is not over and institutions and citizens alike will still have to face its consequences and trauma,” Mattarella warned.

It would be “unacceptable and unforgivable to squander this legacy of sacrifice, pain, hope and the need to trust our people,” he said.

“Italy – in this emergency situation – has shown its best face,” Mattarella said, adding that he was proud of his country and the “moral unity” of Italians which will be “the engine of rebirth”.

Alberto Zangrillo, head of the San Raffaele Hospital in Milan, had caused a row this week by claiming that the virus no longer existed in Italy, prompting the government and experts around the world to urge caution. Mattarella on Tuesday took part in national day celebrations wearing a face mask as he laid a wreath at the tomb of the Unknown Soldier in Rome.

The Frecce Tricolori — the aerobatic squad of the Italian Air Force — flew over Rome, releasing a trail of smoke across the sky in the three colours of the national flag.

They had flown over several cities in the north, the part of the peninsula hardest hit by the new coronavirus, earlier in the week for a “message of hope and solidarity”.

The holiday marks the day in 1946 when Italians, in a passionate referendum, got rid of the monarchy and became a republic.

Mattarella was due to visit Codogno, the town where the virus first appeared in Italy in mid-February, on Tuesday afternoon to pay tribute to the memory of coronavirus victims in the Lombardy region.

Still traumatised but eager to return to normal life and to revive the economy, in particular the tourism sector, Italy has been gradually loosening restrictions since the beginning of May.

Shops, cafes and terraces have reopened, as have the vast majority of monuments and tourist sites including Saint Peter's Basilica, Pompeii, the Colosseum, the Leaning Tower of Pisa, the cathedrals of Milan and Florence and the Vatican Museums.

As a final step in lifting the restrictions, borders will reopen to foreign tourists on Wednesday and Italians will once again be allowed to move freely between the country's regions.

The government has insisted this is one of the most dangerous phases of the pandemic and has urged people to abide by social distancing rules and wear masks to prevent the virus from spreading once again.

According to the latest official daily death toll, 60 people have died from COVID-19 in the last 24 hours and 178 new cases were recorded, the lowest figure since February 26.