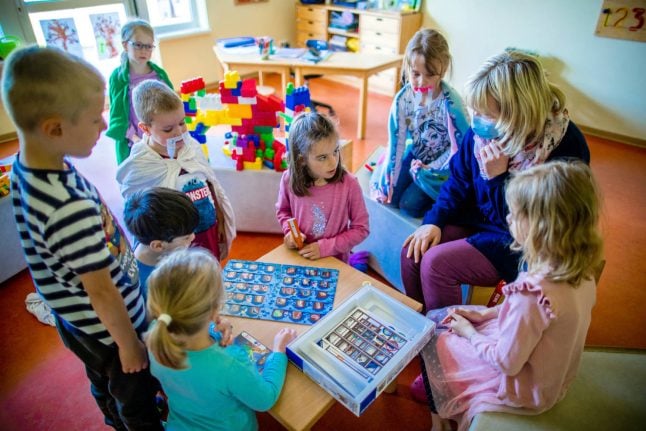 Children at a Kita in Schwerin, Mecklenburg-Western Pomerania on May 20th after it reopened on May 18th. Photo: DPA

In some states, such as Thuringia, all primary school students will return to the classroom at the same time, with municipalities able to decide for themselves if social distancing requirements should be put in place.

READ ALSO: State by state: When are schools and Kitas around Germany reopening?

Yet politicians and researchers have warned against a quick return to normality amid uncertainty about how the virus can spread among children.

“The truth is that we currently have a situation which is being studied, and that does not allow any real conclusions to be drawn about the extent to which children contribute to the spread of the virus,” Health Minister Jens Spahn told the newspaper Augsburger Allgemeine on Thursday.

“There are very different evaluations – and that makes it particularly difficult to make political decisions.”

Spahn pointed out that new scientific knowledge about the virus was available almost daily. This also forces politicians to change assessments and adapt new measures.

READ ALSO: When and how will Germany's daycare centres reopen?

“The areas of kindergarten and primary school are particularly difficult,” he said.

In order to contain the spread of coronavirus, all of Germany's 16 state states closed schools and day-care centers (Kitas) in mid-March.

In the meantime, school operations are being gradually ramped up around the country, but there is no uniform procedure on when pupils can return to the classroom or daycare.

Last Monday, Saxony was the first state in Germany to reopen primary schools and daycare centres at limited capacity. Instead of relying on small groups and distance rules, groups and classes are separated from each other.

Schleswig-Holstein also decided on Wednesday that all primary school children there should go back to the classroom from June 8th on a daily basis.

Starting in mid-June, Saxony-Anhalt is also aiming to have a full-class operation for primary school pupils again. In Baden-Württemberg this is planned from the end of June.

Full day-care centre openings are also on the horizon, with many states planning a full opening by start of summer holidays on June 29th.

READ ALSO: State by state: When (and how) will Germany's schools reopen again?

Yet the trade union for education and science (GEW) considers the health of educators and teachers to be at risk through the states' “premature” move to reopen.

The plans are considered premature, said GEW state chair Astrid Henke. The larger the group of children, the greater the danger to the health of the educators, she said. Children at a Kita in Schriesheim, Baden-Württemberg washing their hands on May 18th. Photo: DPA

“People should continue to keep a distance of 1.5 metres between themselves. However, this should not apply to 25 children in primary school classes that are often too small and difficult to ventilate. What a contradiction,” said Henke.

“This requires a completely new hygiene and health protection plan, which cannot simply be pulled out of a hat”, Meidinger told the Passauer Neue Presse on Thursday.

If distance rules were to be dispensed with and all pupils brought back into the classroom, breathing masks in class, comprehensive testing, small study groups throughout the school day and regular ventilation would be necessary.

“The current hygiene concept of the Conference of Education Ministers would have to be completely revised,” said Meidinger.

The German Children's Aid Association, on the other hand, warned of serious consequences for children and young people if schools and Kitas were not to reopen completely soon.

“We must not allow the collateral damage to grow,” President Thomas Krüger told Die Welt on Thursday.

“The lack of the familiar teaching and learning environment is a serious interference with the living environment and the fundamental rights of children, which also impairs their psycho-social development.”

There is also the fear of disadvantages they carry on later on in life to the labour market.

“We will have to deal with a lost generation if we do not quickly open up schools and day-care centres completely,” said Krüger.

The Left Party (Die Linke) reiterated its call for a summit meeting with Chancellor Angela Merkel before the summer break.

“A key political goal for the coming weeks should be to ensure that schools and daycare centres throughout Germany can resume regular operations by the end of the summer break,” faction leader Dietmar Bartsch told the daily Neue Osnabrücker Zeitung.