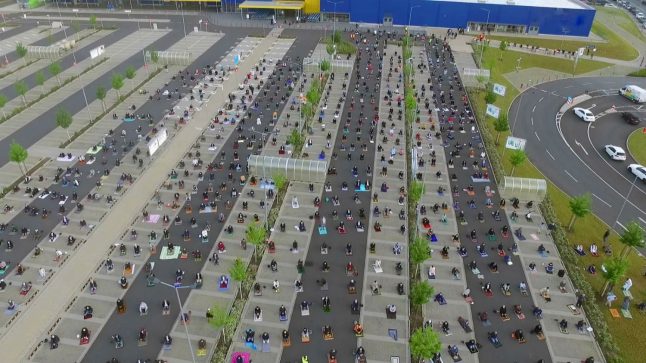 An Ikea car park is used for an Eid prayer in Wetzler, near Frankfurt. Photo: IGMG/DPA

How do you ensure social distancing at events such as theatre shows or football matches? Or even in schools, restaurants or during religious gatherings?

As the lockdown restrictions continue to ease, people across Germany are getting creative to ensure there's enough distance to keep the number of coronavirus infections at bay.

Here are some pictures that show how they are doing it. All photos unless otherwise stated are by DPA. At theatre company the Berliner Ensemble, bosses decided to rebuild the auditorium so they can ensure distance when they are allowed to reopen.

“We absolutely want to play again, this is our mission,” Oliver Reese, artistic director told The Local.

The plans for the next season had to be completely rethought and organized in the past weeks. But we have succeeded, in close cooperation with the artistic teams and also with our ensemble, in playfully developing new visions for this coming, extraordinary season.”

They're also thinking about how social distancing can work on stage.

“We want to see the restrictions imposed by corona as a common challenge: how do we define encounter – between the actors, but also with the audience?” Reese said.

“Does closeness on stage always require touch? It is already clear that certain productions will not be possible under the changed circumstances. But numerous artists have developed a great desire to search for these new signs in our upcoming premieres.”

The Berliner Ensemble is set to open in September.

In Wetzler, near Frankfurt in the central German state of Hesse, hundreds of Muslims gathered together – but with distance – for an Eid prayer in the car park of a branch of Ikea.

Around 800 Muslims prayed in the large outdoor space to mark the end of the holy month of Ramadan on Sunday May 24th.

READ ALSO: Coronavirus in Germany: Which restrictions are changing from Monday May 25th?

Places of worship have reopened in Germany but they must follow rules to curb the spread of coronavirus. Especially to this Ikea branch in Germany.

Local Muslims asked if they can use the car park for prayers in order to maintain distancing per regulations. And Ikea said yes pic.twitter.com/6EDLmjkY9I

A church service in the Berliner Dom The Cafe Roth in Schwerin, in the northeastern state of Mecklenburg-Western Pomerania, celebrated its reopening recently by giving customers pool noodles to wear on their head in a bid to show social distancing in action.

The stunt gained worldwide attention, making the news across the world.

Teddy bears have been placed at tables in the dining room of the Hofheim restaurant “Beef'n Beer” in the central state of Hesse, in order to guarantee the minimum distance between guests.

They do make cute dinner guests. No fans at football matches

This is what Bundesliga games in Germany look like at the moment – empty stadiums. This was the scene at the RB Leipzig – Hertha BSC match on May 27th in the Red Bull Arena in Leipzig. And when journalists cover the games, they have to sit far apart, shown here at the FC Union Berlin – 1. FSV Mainz game on May 27th. When it comes to exams, pupils at schools have to have plenty more space. This is a view of the Albert-Einstein-Gymnasium in Ravensburg, Baden-Württemberg on May 20th. At restaurants and cafes some tables must remain free to ensure distance, such as this one at a hotel restaurant in Mecklenburg-Western Pomerania. Is this the future of cinemas? Plexiglass has been installed between the seats of the Cineplex Alhambra in Berlin to ensure social distancing.

Cinemas in Berlin don't have an opening date yet.

READ ALSO: How cinemas in Germany plan to reopen Some seats can be blocked off on trains, like this one in Frankfurt, to ensure social distancing.