SHARE
COPY LINK
Philip Manshaus, 22, killed his 17-year-old stepsister Johanne Zhangjia Ihle-Hansen at their home in Oslo on August 10 last year.
He then entered the Al-Noor Mosque in Bærum and opened fire, before being quickly overpowered by two elderly members of the congregation.
Prosector Johan Øverberg said that he could see no mitigating circumstances which might point to a lesser sentence for Manshaus, whose only regret during the trial was that he had not killed more people.
“He showed no mercy,” he said of the murder of Ihle-Hansen. “This was a simple execution of his stepsister from childhood. Johanne was defenceless. It was a cynical and deliberate murder. He is saying that he can decide who deserves to live, and who deserves to die.”
READ ALSO:
Øverberg said that the failure of the mosque attack did not mean it should be treated less seriously that a successful attack, such as that carried out by Brenton Tarrant in New Zealand.
“It may have been…a clumsy and unsuccessful terrorist attack, with a young person simply disarmed by older men,” Øverberg said.
“But although he may have made some mistakes along the way, he was determined to take as many lives as possible. He had enough ammunition to kill as many people as Tarrant. There is no basis for questioning the severity of the attack.”
Øverberg agreed with the verdict of court psychiatrists that Manshaus was not psychotic, and had instead been radicalized over a two-year period.
Manhaus has also maintained throughout the trial that he is criminally accountable. “I was afraid that the opinions I had could be defined as a personality disorder,” he told the court. 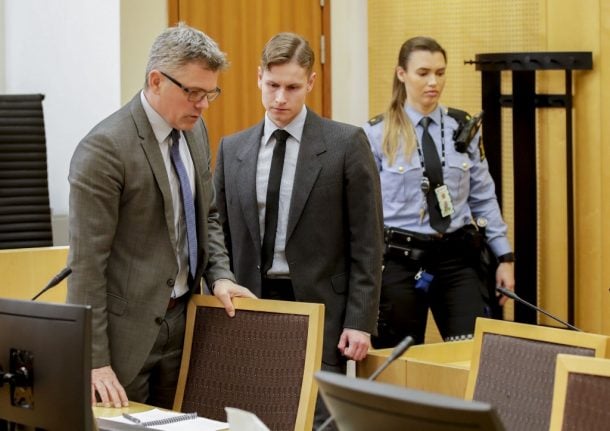 Philip Manshaus was arrested after opening fire in the Al-Noor mosque in the affluent Oslo suburb of Bærum on August 10th last year before he was overpowered by a 65-year-old man.

The body of his 17-year-old step-sister was later found in their home.

Police have previously said they believed the motive for the murder to be racist, saying he killed her because she was of Asian origin.

The charge sheet filed with the Asker and Bærum district court on Monday contained two charges.

One charge of murder for having killed his stepsister, and one charge of a “terrorist act” by attempting to kill with the “intention of creating severe fear in a population.”

The trial is expected to begin on May 7th.

Manshaus has previously admitted to the actions but has rejected the charges of murder and terrorism, claiming that it was a “kind of self-defence.”

On September 9th, at a court hearing to extend his detention in custody, Manshaus raised his arm in a Nazi salute to the assembled media.

Manshaus lawyer, Unni Fries, told broadcaster NRK that the charges did not come as a surprise.

“We are going to take a closer look at this and work towards the trial,” Fried said.