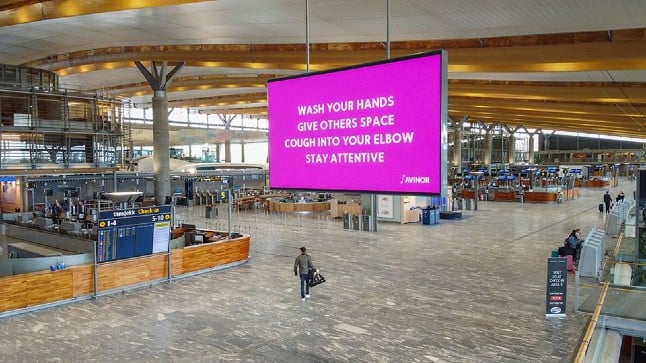 A rare arrival at Oslo's Gardemoen airport walks under a sign offering hygiene recommendations. Photo: Avinor
In a press release published on Wednesday morning, the country's justice ministry said that citizens of the EEA countries — which include EU members states, Iceland and Liechtenstein, and also citizens of Switzerland — would now be allowed to visit relatives in Norway.
At the same time, the family members of EEA citizens resident in Norway will be able to enter the country.
“The government is constantly working to find the right balance between protecting again infection and other important social considerations,” Norway's Justice Minister Monica Mæland said a statement as she announced the new guidelines.
“If the infection situation so indicates, we will gradually open up entry for new groups of foreigners who in a normal situation would fulfil the conditions for entry into the country.”
At a government press conference on Wednesday afternoon, Mæland said that “family” would include spouses or fiancées, children and parents, and also the children or parents of spouses or fiancées.
The new relaxed rules will also allow citizens of EEA countries to visit properties they own the country, allowing Swedes and Danes to visit their Norwegian holiday cabins over the summer.
In its announcement, the government also opened the way for the seasonal workers whom farmers rely on to pick their crops to enter the country.
It warned, however, that such workers might still struggle to make it into the country.
“Everyone must be aware that there may be several practical obstacles that make it difficult for some seasonal workers to travel to Norway,” Mæland said. “The Norwegian authorities are working to facilitate the smoothest possible process. However, not all conditions are controlled, such as air traffic, and internal travel restrictions in the countries concerned.”
The relaxation does not, however, excuse those travelling in, either for work or to visit family, from spending 10 days in quarantine on arrival.