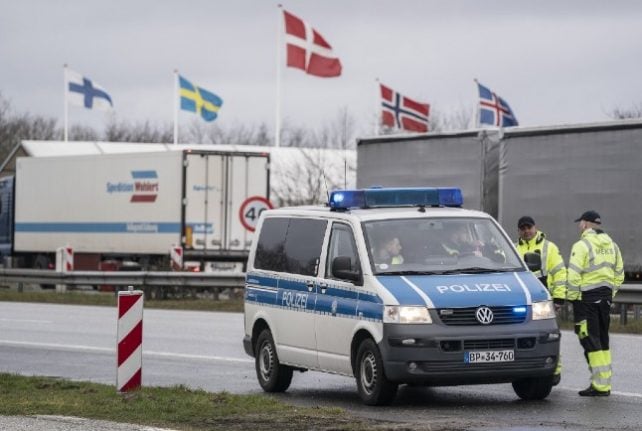 German police proceed to controls near the border with Denmark on March 16 after the country closed its border. Photo: Claus Fisker / Ritzau Scanpix / AFP
“We are in principle ready to open the border with Denmark, but we want to agree the exact time together with the Danish government, whose decision we are awaiting,” Horst Seehofer told journalists in Berlin.
Seehofer said that Germany would be willing to open the border with Germany as early as this week, but explained that
Denmark wants any border reopening to take place in collaboration with the other Nordic countries.
Germany will sign the border opening agreement “as soon as the Danish government has completed its ongoing consultation with neighbouring countries”, he said.
Germany has already made agreements with France, Switzerland and Austria on a partial reopening of the borders from May 15, and hopes to reinstitute border free travel between all EU countries from 15 June, he said.
Denmark's government last week committed to announce a decision on whether to lift border controls by June 10 at the latest, after coming under pressure both from the Liberal Party opposition and from her support party, the Social Liberal Party.
Austria's tourism minister Elisabeth Köstinger told state radio station O1 on Wednesday that the border with Germany would be open from next month
“From June 15, the opening of the border between Germany and Austria will be possible,” she said after German and Austrian chancellors, Angela Merkel and Sebastian Kurz, “agreed on a gradual opening” of the border” during a phone call on Tuesday.
In Denmark, parties representing a majority of MPs were last week pushing for a clear timetable from the government on the reopening of the country's borders, arguing that this was crucial to the recovery of the country's hard-pressed tourism industry.
“We have to look at the boundaries. It matters a lot to business if it can open up for the summer holidays, ”Jakob Ellemann-Jensen, leader of the Liberal Party said at the start of last week's negotiations over the the second and third phase of Denmark's reopening, according to the Altinget news site.
“We need to know if we can accept German and Norwegian tourists. We need to clarify that question. We need to have a long-term plan, ” Morten Østergaard, leader of the Social Liberal party told DR.
Only the Danish People's Party, the leftwing Red Green Alliance, and the Socialist Left Party were opposed to reopening the border to Germany.
“It is a bad idea to open the borders,” said Kristian Thulesen Dahl. “I would rather use the space we have to allow the Danes to do more things than to let the Germans in.”
Pia Olsen Dyhr, leader of the Socialist Left Party, echoed this sentiment last week.
“In Jutland, there is less spread of infection than in Copenhagen. If we open the border to Germany, then we will not have the opportunity to open after-schools, for example,” she told Danish broadcaster TV2 last week.
But this was an issue that Denmark's Social Democrat government refused to budge on last week.