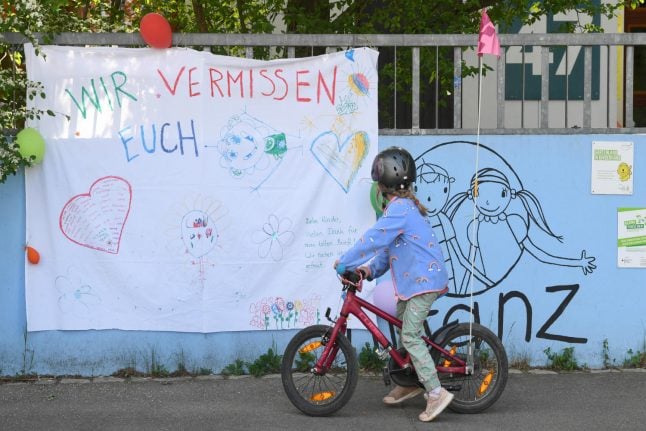 A sign reading "We miss you" hangs outside of a kindergarten in Stuttgart on April 27th. Photo: DPA

During the corona crisis, many parents have been torn between working from home and taking care of their young children.

Daycare centres (or Kitas) in most states have only been available for parents employed in emergency professions and in some states, such as Hamburg and North Rhine-Westphalia, for single parents.

But now a bit of relief could be underway: Family ministers from each of Germany’s 16 states have published a paper that calls for the “cautious” reopening of Kitas around Germany.

READ ALSO: State by state: When (and how) will Germany's schools reopen?

What does the proposal entail?

The phases include emergency care, as it is already in place; extended emergency care, ie. for single parents in all states, starting on May 11th; limited regular operations; and a return to full normal operations. A sign hangs outside of a Berlin Kita telling children they're missed. Photo: DPA

The proposal states that, after every additional phase implemented, the new cases should be closely monitored for two weeks before a further step can follow.

The ultimate goal is still to slow down the spread of the coronavirus and interrupt infection chains.

Implementing the model will ultimately lie in the hands of each German state.

Yet Germany's Integration Commissioner, Annette Widmann-Mauz, emphasised that a quick decision would be necessary

“It cannot be that the reopening of the Bundesliga receives more public attention than parents and children with special needs for support,” she said on Wednesday.

What proposals have so far come from individual federal states?

Berlin's mayor Michael Müller (SPD) announced on Thursday morning that Kitas are in the process of returning to normal operation. “We are already at about 40 percent of operations and gradually going up to 70 percent,” he said on RBB Inforadio.

Bavaria's State Premier Markus Söder has already announced that half of all children will be able to return to Kitas by mid-May. After the beginning of June, the rest of the southern state's Kitas are also slated to open their doors again.

Starting on May 11th, Kitas for up to five children at a time will be allowed again.

Mecklenburg-Western Pomerania also plans to open up Kitas for all children starting on May 18th.

Lower Saxony's state government has drawn up a step-by-step plan in which Kitas will begin to open up, first with five children at a time, on May 11th.

North Rhine-Westphalia is perhaps the state which is most eager to open up its Kitas. “We will not be put off another week,” said state Family Minister Joachim Stamp (FDP) in a podcast.

He added that necessary steps must be taken day care workers and educators “feel safe even in times of pandemic.” While the state has laid out a plan for opening up public life again, it is still unclear when regular Kita operations will resume.

What do independent experts demand?

The Trade Union for Education and Science (GEW) said that sufficient time is needed to gradually bring children back into a daycare setting.

“More children in this situation means that there has to be good planning in order to rearrange rooms, remove furniture, redistribute toys and plan sufficient staffing. This cannot be done overnight,” GEW board member Björn Köhler told the Tagesschau.

He said that carers also need to be adequately protected: Anyone who belongs to a risk group, or is over 60 years old, should be able to decide for themselves whether or not to look after children.

In addition, the GEW stated that no more than five children at a time should be looked after.

However, Germany’s Association of Paediatricians and Adolescent Doctors is pushing for a speedy reopening of daycare centres.

“This may require a lot of effort from teachers and educators. But it is better than letting the children wither away in their own four walls. And that would happen,” he said. A sign for emergency childcare for single parents hangs outside of a school in Hamburg. Photo: DPA

How great is the risk of infection among children?

The findings on this question vary widely.

According to a recent study, children can spread the coronavirus in the same way as adults.

The number of viruses which can be detected in the respiratory tract does not differ between different age groups, report researchers led by virologist Drosten from the Charité Hospital in Berlin.

Based on their results, the researchers warn against an unrestricted opening of schools and kindergartens in Germany.

A recent study in Iceland had shown that children under ten years of age were significantly less likely to be infected with the coronavirus than adults.

Yet earlier data from China, on the other hand, has suggested that children were infected just as often as adults from the coronavirus, but less likely to become ill.