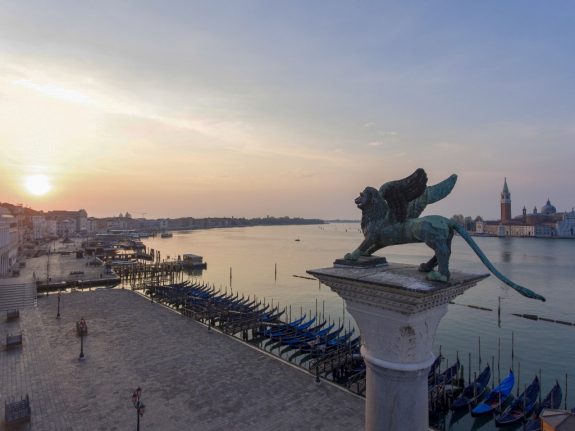 Venice's waters are clearer than they have been in years after six weeks of lockdown. Photo: Marco Sabadin/AFP

A crab tries to grab the intruding lens, jellyfish propel themselves along near the surface, schools of fish swim peacefully by, crustaceans cling to the city's famous jetties, and seaweed of every colour wafts gently on the current.

The coronavirus has emptied Venice of millions of tourists since the beginning of March and its waters are no longer stirred by the thousands of boats, taxis, vaporetti, and gondolas that usually cross it.

For Mangoni, this is an opportunity to rediscover the very diverse ecosystem that populates the Venice Lagoon. His film of a jellyfish swimming slowly though translucent canal water has gone viral on social media.

“Now we can see 50 or 60 centimetres, and sometimes even a metre from the surface. As a result, we can see animals that were literally hidden in the murky waters.”

Mangoni says he has never seen such clear waters in the 20 years he has worked in Venice.

“The only difference is that some animals that before were relegated to bigger or wider canals in the lagoon can now go as far as in the city centre, since the traffic of gondolas, motorboats and smaller boats has ceased,” he said.

Marco Sigovini, a researcher at the Institute of Marine Sciences of Venice (ISMAR-CNR), says he has seen marine species in the centre of the former city state for the first time.

“Fauna and flora of Venice Lagoon are much more diversified and interesting than what one might think,” he said.

“What decreased in the city is not only traffic with pollution produced by boats, but also the noise, which is another kind of pollution and disturbs many lagoon organisms.”

OPINION: After flooding and coronavirus, is it time Venice stopped relying on tourism?

Nevertheless, he is not surprised at how many jellyfish are being observed. “Over the last 20-30 years jellyfish have increased in numbers generally. They come into the lagoon more and more frequently, particularly at certain times of year, perhaps carried by the current,” he said.

“Normally, there's a lot of traffic so it's likely many of them are often killed.”

Mangoni takes pictures and videos on his way to work and says life in Venice these days is “like being on a coral reef”.

“The number of colours and lifeforms is extraordinary, which makes the lagoon unique,” he said.

But Sigovini does not think much will change long-term for Venetian fauna.

“Most likely these few months of lockdown won't suffice to really change the quality of our ecosystem,” he said.