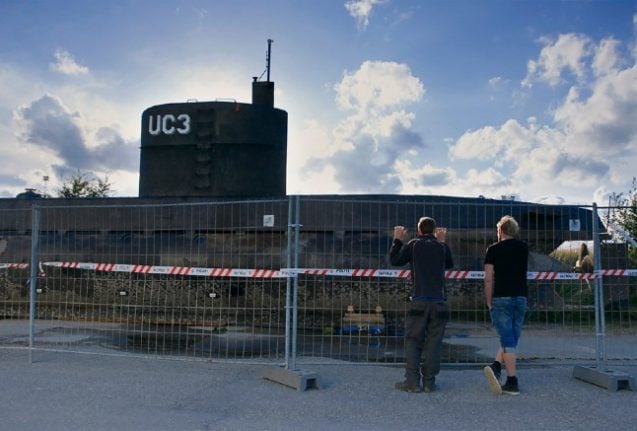 A still from the documentary Into the Deep showing Peter Madsen's former associates looking at the submarine after it was salvaged by police. Photo. Into the Deep
The Australian documentary maker Emma Sullivan had been filming Madsen and his team for 18 months at the time Wall, a talented young Swedish journalist, set out to sea with him on his home-built submarine.
After she did not return, she then filmed the reaction of the entourage of the charismatic so-called 'inventor', as her torso, head and arms were recovered from the sea over the coming weeks.
The resulting documentary, Into the Deep, won high praise when it premiered at the Sundance Film Festival in January.
Variety Magazine called it “riveting,” as well as “restrained, humanist and chilling”. It is, the magazine wrote, both “a rare opportunity to study a murderer before his first kill”, and “a story of the workers left ashore floundering to understand how they devoted their lives to a fiend”.
But after several of the key participants in the film withdrew their consent, Netflix has decided not to stream the documentary, Sweden's state broadcaster SVT reported on Tuesday evening.
Anja Olsen, one of the Madsen's entourage, told Denmark's Ekko film magazine in February that she had never signed a release form allowing footage of her to be included in the documentary, while Cam Matheson, a cinematographer on the film, told The Guardian he believed it should have been edited to remove those who did not wish to be in it.
Emma Sullivan, the film's director, insisted to Ekko that “all participants took part in the documentary voluntarily”.
READ ALSO: How Denmark's submarine murderer crumpled as the verdict hit home