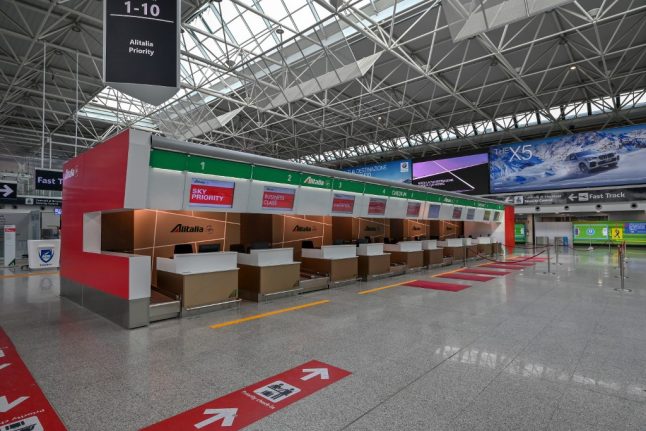 For about a month now, Clemente Ingenito, a pilot for Italy’s principal airline, Alitalia, has been flying planes with barely anybody in them.

Each day before take-off, a few forlorn passengers trickle into spaced-apart seats, ushered through by air hostesses whose smiles are concealed by masks.

Even from his colleagues, Ingenito is isolated: “Contact with the airport or maintenance personnel is limited,” he laments.

Despite Europe’s stringent restrictions on international travel, Alitalia is continuing to run direct flights between London and Rome. For €212, at the time of writing, you can fly from Rome to London; for €243, you can fly from London to Rome.

There are also flights to and from Brussels, Munich, Paris, Nice, Frankfurt, Zurich, and Geneva. This may come as a surprise: Although Italy never officially banned incoming visitors, and airports remain open, travel is effectively on hold in the country: foreign airlines have suspended Italy-bound flights; cruise ships are banned from offloading passengers on Italian shores; neighbouring countries have tightened border controls.

Merely going to the supermarket in Italy requires completing a form: Who, in the middle of all this, is still flying?

In an emailed statement, Alitalia offered a straightforward explanation: flights are going back and forth three times a day to accommodate stranded travellers: Italians stuck in the UK and, presumably, Brits stuck in Italy – although Alitalia declined to detail its passengers’ nationalities.

Ingenito says some 50,000 passengers have been repatriated to Italy so far, but cites fewer on the Britain-bound flights.

Planes have also been chartered to transport medical supplies and protective gear, he added.

Rory, a Rome-based neuroscience researcher who returned to London a few weeks after the lockdown began, was among the thousands of expats Alitalia has ferried from one virus-ridden country to another.

Joined by only around twelve other passengers, he explains, flying was surreal.

Everyone wore masks; there was no food trolley. “Everyone including the air hostesses just seemed kind of bemused with the whole situation,” he recalls. “But then it was hard to tell on account of the face masks.”

Alitalia tells us that it has been strict in enforcing social distancing measures on these flights: as well as the gloves and masks worn by hostesses and passengers, the airline has imposed an upper-limit of 60 people per flight – down from 180 – and has fitted planes with HEPA air purifiers.

“Nobody was sat directly next to, in front of or behind you unless you were travelling with them,” says Scott Balaam, a freelance journalist who made a similar trip.

Although Fiumicino was slightly busier, the airports were equally sparse, says Rory.

Officially, shops and restaurants remain active from 6am to 6pm, but in Rome he saw only a single coffee bar open. Otherwise, the regular cottage industry of departure lounge commerce had disappeared.

In the meantime, the machines have taken over. Vending machines – now “adequately supplied” – are the only source of food and drink after 6pm, a Fiumicino press officer tells us. Messages blasted through loudspeakers urge travellers to keep their distance. Other than the border police, who have been deployed to help people fill in their travel forms, few humans remain. Alitalia is the only airline offering its services. While other airlines are technically allowed to continue operations, most – including Ryanair, Easyjet and British Airways – have suspended their flights, the spokesman said.

So Alitalia is shouldering the full responsibility of ferrying Italian expats back home, presumably at a financial loss, though the spokesman declined to comment on this.

The alternative is flying a route split between three different airlines, costing €1,122, and lasting 44 hours.

Balaam, who is based in Florence, undertook such a journey, travelling from Dublin to Florence, via Heathrow and Rome. It was exhaustingly long.

First, he flew via Aer Lingus to London, where officials took his personal details and checked his temperature. Then, after landing in Rome, he joined fellow passengers in a rush for the exit, but was thwarted. A customs officer took him aside and grilled him for more details: his proof of residence, his marriage certificate. They went so far as to call his wife personally—who did, indeed, turn out to be real.

Two hours and 45 minutes later, he was through. Except he wasn’t: as a new arrival subject to quarantine rules he was prohibited by security from taking a train to Florence for a full fourteen days, so he traversed the 288km by taxi.

READ ALSO: What are Italy's travel restrictions and when will they be lifted?

Nevertheless, what alarmed him wasn’t the level of security, but the relative lack thereof in London. “I don't believe there are the same checks taking place when people arrive in the UK,” he said.

Italy’s airlines have taken a considerable financial hit since the country’s outbreak in late February.

At least €9.5bn in revenue has been lost, according to the International Air Transport Association, joined by a further €314bn globally.

The Italian government has reserved €500m for an Alitalia bailout.

Ingenito, the pilot, imagines it will only get worse for his industry. He cites projections that revenue will drop 45 percent in the coming year, costing the industry 250 billion dollars and some 25 million jobs. “Figures that make one’s wrists tremble,” he said. “A loss of this kind wasn’t known even after 9/11.”