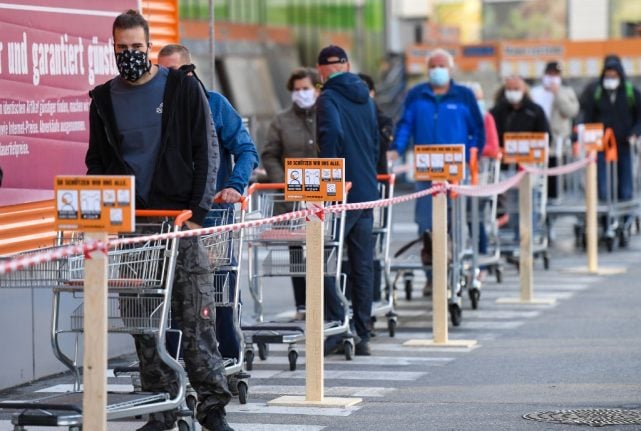 Customers wearing face masks and pushing shopping carts line up in front of a DIY store in Innsbruck, Austria, after it re-opened on April 14, 2020, following a "shutdown" in a measure to limit the sp

Among the first in the EU to have imposed strict confinement rules, Austria also became among the first to start lifting them as new coronavirus infections are subsiding.

“I'm simply happy” to be able to go to a flower shop again, Anita Kakac, a 75-year-old Vienna pensioner, told AFP, sporting a blue mask as a red neon “Open” sign flashed behind her in the store window.

“I just hope by God that it's not too early” to ease the lockdown, she said.

“We are on course… Today we can take, as planned, the first step toward the new normal,” Chancellor Sebastian Kurz told a press conference.

Restaurants, bars and schools will still remain closed until at least middle of May, and public events are banned until the end of June. And even as shoppers returned slowly on Tuesday, social distancing and other rules remained in place. Mask-wearing is compulsory in shops and public transport.

Queues were staggered, and one tobacco shop only served customers on the street, while an optician made only part of the store accessible, asking customers to ring a bell to enter.

In a mobile phone shop, employees wore gloves matching the rest of their outfits and badges that read “handshakes prohibited”.

One gardening and hardware store chain made it compulsory for each customer to take a trolley so that they'd be sure to keep a minimum distance to others, according to security personnel.

Only 100 trolleys, all disinfected after each use, are allowed at any one time, while posters read “shopping should not be a family outing”.

Store owners said they were relieved to open again, but were struggling with losses and afraid of long-lasting consequences for their businesses.

“It will take a long time for customers to come back. Some have lost their jobs, others are afraid, and a book is a luxury,” said Gunnar Graessl, who reopened his bookstore in downtown Vienna. And masks impeded having a discussion or drink together. “The customer enters, buys and leaves,” he told AFP.

Lenz Dreher, a 17-year-old student, said he chose not to shop online for supplies for his goldsmithing hobby but wait for shops to reopen instead.

But he also doubted it would be business as usual from now on.

“Firstly the fear hasn't gone away completely. Secondly people may not have as much money as before,” he said, adding that he hoped people would also “change their behaviour” after they realise they could manage “without buying new pants every week”.

Yvan Savic, who started selling take-out as a stop-gap measure when all restaurants had to close, said he hoped with shops reopening more people would pass by.

The central train station's huge shopping centre is also still idling with railway services having been ramped down and most stores staying shut.

Markus Handle, a 44-year-old cosmetic surgeon leaving Vienna for western Tyrol province for work, said the confinement went “a little too far” with improved hygiene the most important measure.

“It's good that the economy is picking up,” he said.

The Alpine nation of 8.8 million people has been spared the worst of the virus with some 14,000 reported cases and 384 deaths.

But government officials warn that easing the restrictions can be reversed any time if contaminations rise again.

“If we have to close again, it will be very hard to hold on financially,” bookstore owner Graessl said.

Hardware store owner Andreas Zanaschka said he expected his business to pick up again but taxes to increase as the government struggles with the economic downturn caused by the crisis.

“What concerns me are the next 20 years,” he said.

The bells of Vienna’s St. Stephen’s Cathedral rang out in memory of Lisa-Maria Kellermayr on Monday, and hundreds of people held a candle vigil outside, after the 36-year-old doctor was found dead at her practice on July 29.

She had long been the target of death threats because of her criticism of the widespread anti-lockdown protests of 2021.

An autopsy later confirmed that Kellermayr had taken her own life.

Austria has found itself deeply polarised over coronavirus restrictions and in particular a government policy –subsequently dropped — of making vaccination against the coronavirus compulsory.

Kellermayr — whose practice was in the region of Upper Austria where immunisation rates are particularly low — had frequently complained of the menace.

“For more than seven months, we have been receiving… death threats from those opposed to coronavirus measures and vaccinations,” she wrote at the time, sharing a message from one internet user who said they would pose as a patient in order to attack her and her staff.

She described how she had “invested more than 100,000 euros” ($102,000) in measures to ensure her patients’ safety and was on the brink of bankruptcy.

Then, at the end of June, Kellermayr announced on her professional website that she would not be seeing patients until further notice.

Daniel Landau, who organised a memorial vigil for her in Vienna, said that Kellermayr had become a virtual recluse for several weeks. “She didn’t dare to leave” her office, Landau told AFP.

On Saturday, the head of Austria’s doctors’ association, Johannes Steinhart, said that while aggressive behaviour towards medical staff was not new, it had been “fired up and noticeably aggravated” by the debate over Covid-19 and vaccines.

The police, who had previously suggested Kellermayr was exploiting the situation for attention, insist they did everything to protect her. The local prosecutor’s office also rejected suggestions it could have done more.

“As soon as we received the police report (identifying one of the suspects), we sent it over to the relevant authorities in Germany,” spokesman Christoph Weber said.

On Friday, prosecutors in the neighbouring German state of Bavaria said a 59-year-old suspect was being investigated by a specialist hate speech unit.

At the beginning of the week, Austrian President Alexander Van der Bellen visited the small town of Seewalchen where Kellermayr lived to lay flowers in her memory.

After news of her death broke, he had appealed to Austrians to “put an end to intimidation and fear”.

But on some Telegram groups, the hateful messages continue.

“Some people are celebrating her death; others believe the vaccine killed her,” said Ingrid Brodnig, a journalist and author who investigates online disinformation.

“Stricts laws exist” already against online hate, but not enough is done to implement them, Brodnig said.

One government minister has floated the idea of a separate prosecutor’s office to target such cases. Doctors and researchers have also been targeted elsewhere.

French infectious disease specialist, Karine Lacombe, described how she had been vilified for her work as part of a collective of doctors combatting coronavirus-related disinformation.

She, too, complained that the response from the authorities in the face of threats was not robust enough, and has scaled down her public appearances this year.

“You end up thinking that the risk isn’t worth it,” she told AFP. “In that sense (the aggressors) have won, they are gagging us,” she said.