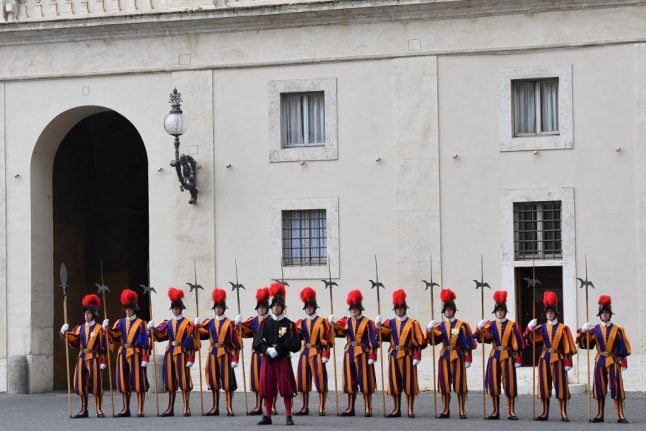 Swiss guards at the Vatican were once mercenaries. Photo by ANDREAS SOLARO / AFP

Late in the medieval times, it became fashionable to recruit Helvetian (as the Swiss were then known) mercenaries as special military units. No country provided as many mercenaries as Switzerland.

The Swiss soldiers were famous for their discipline and military skills, and were often hired to protect European monarchs and other dignitaries.

In fact, they started guarding Pope Julius II in 1506, beginning a tradition of Swiss Papal Guards that continues to this day.

But the soldiers were also engaged in armed combat, fighting on the side of those who paid them the most.

Since this was an easy way for young, healthy people to earn some cash, so many men became mercenaries — some historical records put that number at more than a million —that there was a shortage of farmhands in Switzerland as a result.

That was, of course, long before the Swiss army knife was invented, and the soldiers fought with a pike — a long thrusting spear that could inflict a lot of damage on the enemy.

According to contemporary military experts, “the Swiss could take a cavalry charge of infantry, and march it around a battlefield. What do you do with 100 people armed with long pointy sticks? March them into the enemy that’s what. The Swiss were very good at this. There was no counter to a well ordered Swiss square charging into your troops. It was responsive enough to be very difficult to outflank and very deadly from the front”.

During the 1500s and 1600s, the Helvetians fought in quite a few battles for other countries, including for the French in the Burgundian and Italian Wars, and at the Battle of Novara.

Swiss mercenaries who fought in foreign armies could be called home if Switzerland ever got attacked. But that never happened, and over the next several centuries the country transitioned from a warrior nation to a neutral one it is today.