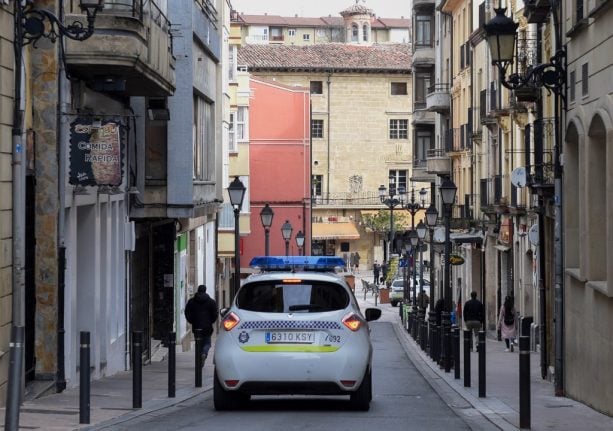 A local police car patrols the streets in the northern Spanish town of Haro on March 8, 2020. Around 30 people are kept at their homes under active observation in Haro. AFP
Without providing more details, Mr Sanchéz said he had been working on the plan with unions and business leaders for the past two weeks and it was ready to roll out.
“We will announce a shock therapy plan in a few days as soon as we determine the exact diagnosis and fine tune the measures,” he said. “We want the plan to be effective and proportional to the scale of the problem.”
Twitter link to Sanchez
Nadia Calvino, the economy minister, said the government was taking action to avoid the outbreak doing more damage to the worst hit industries like tourism.
She said the plan would be temporary and limited.
Opposition parties had earlier criticised the left-wing coalition government for not acting faster to contain the damage caused to the economy by the outbreak in Spain.
Pablo Casado, leader of the conservative Popular Party, told reporters: “When the government does not do anything, sometimes it is the opposition who needs to propose a shock plan.” The total number of people diagnosed with coronavirus (Covid-19) in Spain rose to 1,204 on Monday, health authorities said.

All 30 who have died from the virus were over 69 years old, with many living in nursing homes.

The first person to die from the virus was a 69-year-old man from Valencia who had recently travelled to Nepal. It was first thought that he died from pneunomia but tests later proved the cause was the virus.

The Spanish stock exchange fell 7 per cent today after trading started, the worst collapse since the Iraq War in 2003.

On Monday Vitoria-Gasteiz, a city of 250,000 people in the Basque region, became the first Spanish city to order the closure of all schools for 15 days.

It comes after an outbreak of the coronavirus at a recent funeral in the city. On Saturday police were deployed on the streets of Haro, a town in the La Rioja region after dozens of cases of coronavirus were traced back to a funeral held in a nearby Basque Country two weeks ago.

Police advised people confined to their houses because of coronavirus they will face fines of €600,000 if they break the lock down order.

Some 60 cases originated among people who attended the service in the Basque city of Vitoria-Gasteiz, health authorities said.

Coronavirus in Spain: What's the latest news and how worried should you be? (PAYWALL FREE)

Thirty-nine of those 60 cases were in the La Rioja region, with most of them in the town of Haro and Casalarreina.

Pedro Sanchéz, the Spanish prime minister, is to join a meeting of the health ministry today to assess the next steps to take to try to contain the virus.

Two schools in the Basque Country in northwestern Spain have closed after cases were diagnosed at each school.

FC Barcelona has announced it will hold the Champions League match against Naples on 18 March behind closed doors.

A pupil at the school which Princess Leonor and her sister Princess Sofia attend has been diagnosed with coronavirus.

Princess Leonor is first in line for the Spanish throne after her father, King Felipe VI.

A spokesman for the royal household said: “Like most parents, King Felipe and Queen Sofia are trying to maintain normality for their children. The girls are going to school today.”