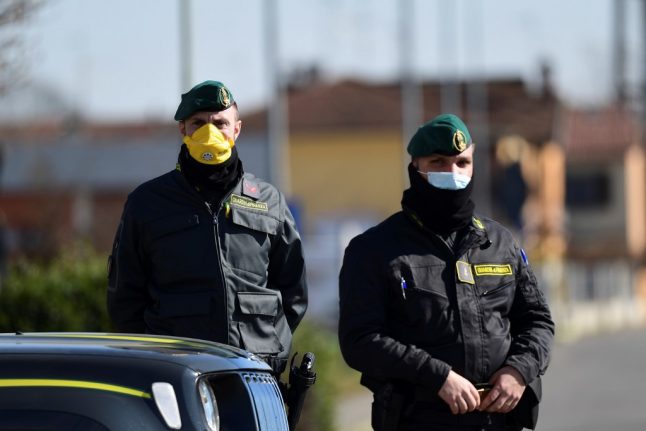 Italian Finance guards (Guardia di Finanza) officers patrol by a check-point at one of the entrance of the small town of Zorlesco, southeast of Milan. AFP

The novel coronavirus is concerning for Europe but there is no reason for alarm.

Those were the words of the EU's health commissioner on Wednesday as Italy battles the world's third-biggest outbreak.

“This is a situation of concern but we must not give in to panic,” Stella Kyriakides told reporters in Rome after meeting Italian Health Minister Roberto Speranza.

“We must also be vigilant when it comes to misinformation and disinformation as well as xenophobic statements which are misleading citizens and putting in question the work of public authorities.”

At the moment it is not recommending the reintroduction of border controls in the Schengen area.

Countries including Austria, Britain, Hungary, Luxembourg, Romania, Spain and Ukraine have warned their citizens not to travel to the affected areas in Italy.

The country by far the most affected by the coronavirus outbreak is Italy where the number of confirmed cases hit 374 on Wednesday and the number of fatalities rose to 12.

The country has seen a surge in cases since last Friday – when only three cases had been confirmed.

The worst affected area is the northern Italian region of Lombardy, where there are more than 250 confirmed cases. Nine of the patients who died were in Lombardy.

All 12 of the victims in Italy were elderly, with some having underlying health conditions.

While there is no need for the public to panic the outbreak has severely affected life in the country.

Wide-ranging measures to halt the spread of the virus have affected the lives of tens of millions of people in Italy, with schools closed and cultural and sporting events cancelled.

Since Saturday, 11 towns in Lombardy and neighbouring Veneto, thought to be where the outbreak began, have been under lockdown with shops and public areas closed and police roadblocks preventing people from leaving or entering the area without a permit. France too is beginning to feel the impact of the spreading the virus.

Authorities announced the death of a 60-year-old teacher in Paris on Wednesday, the second fatality since the start of the epidemic after the death of a Chinese tourist earlier died this month.

The latest victim, who worked at a junior-high school in the town of Crepy-en-Valois, about 80 kilometres (50 miles) northeast of Paris, is not believed to have travelled to an area affected by the global coronavirus outbreak, the education ministry said.

Le Parisien newspaper quoted the mayor of the teacher's hometown of Vaumoise as saying he had “begun to feel ill at the start of the (mid-term) holidays and had been quickly hospitalised.”

France has reported four other new cases of COVID-19 in the past 24 hours – two in people returning from Italy – bringing the total number of infections to 17.

Eleven of those have recovered from the disease.

The French government has vowed to keep the border open with Italy despite fears of a similar surge in cases.

“Closing the border doesn't make much sense,” said Jérôme Salomon, Director General of Health. “Not to mention that you can travel by land, sea and air, or go through Italy and Austria.”

Nevertheless authorities and hospitals across the country are stepping up preparations for a major rise in the number of cases.

An extra 70 hospitals are now prepared to receive and treat coronavirus patients.

Coronavirus: What are the rules around self-isolation and quarantine in France? The first case of the virus was confirmed in Switzerland this week.

The case is a man in his 70s who was infected near Milan where he attended an event on February 15th, federal health office chief Pascal Strupler told reporters.

The man is from the Italian-speaking canton of Ticino, on the border with Italy, and has been with his family since suffering the first symptoms on February 17.

Prior to this case, Switzerland had tested some 300 suspect cases that were all found to be negative.

The government said on Monday that it had stepped up testing on patients with flu-like symptoms and was working to raise awareness at all border points.

Switzerland on Monday said the country was in a state of “heightened vigilance” because of a surge in Italy.

Spain too saw jump in the number of coronavirus cases this week with five people testing positive on the mainland as well as four Italian tourists in Tenerife.

All of the cases currently confirmed in Spain are either in Italians or people who travelled from northern Italy.

A Tenerife hotel remained on lockdown on Wednesday after the tourists tested positive.

According to one guest at the hotel, a note was pushed under the door of each room advising guests to stay in their rooms.

It read: “Dear Guests, We regret to inform you that for healthy (sic) reasons, the hotel has been closed down. Until the sanitary authorities warn, you must remain in your rooms.” In Germany, three new cases of the virus were confirmed in the west of the country on Wednesday.

On Tuesday evening, two new cases of the coronavirus were confirmed in Baden-Württemberg and North Rhine-Westphalia – both marking the first incidents in the two western states.

An additional case was confirmed in North Rhine-Westphalia on Wednesday afternoon.

Local authorities are now discussing how to proceed, a spokesperson for the Ministry of Health in North Rhine-Westphalia told dpa early Wednesday morning.

The two 24-year-olds have been quarantined in a hospital in Innsbruck, the capital of Tyrol province, which borders Italy, according to Tyrol Governor Guenther Platter.

One of them was from Lombardy but it was not yet clear how the two contracted the virus. Both were suffering a fever but are in a stable condition.

A hotel was placed under lockdown in Innsbruck after an Italian receptionist working there contracted the virus.

“No one can get in and out of the hotel to make sure that if other infected people are staying in the hotel, the virus won't be spread,” Interior Minister Karl Nehammer told a press conference.

“All these measures have one purpose – to stop the virus and its spread. There is no reason to panic,” he said, adding that Austria was prepared for such a case.

The lockdown was then lifted on Wednesday.

There have also been cases confirmed in Croatia and Belgium.

Sweden raised its risk alert this week over the spread of coronavirus.

So far there has only been one confirmed case of the coronavirus in Sweden, and this person is not thought to have infected anyone else after a self-imposed quarantine.

“In Sweden and in Europe, there is extensive testing going on in order to be able to find suspected cases and prevent spread of infection early on.

“So far, the Public Health Agency has carried out around 200 tests, of which all have come back negative except one. A further eight laboratories in Sweden now have the capacity to carry out analyses for the new coronavirus,” the country's public health agency wrote.

In Denmark, the country's foreign ministry has advised the country’s citizens to be cautious when travelling to a number of countries with confirmed coronavirus cases.

Britain has requested travellers returning from affected areas in northern Italy, China, South Korea and Iran to isolate themselves and inform the authorities.

Six schools were closed in the UK while others asked pupils or staff members who had visited northern Italy to remain at home.

Such screenings are done in Budapest and Debrecen, Hungary's second-largest city, as well as airports in the Ukrainian capital Kiev and on buses at Ukraine's land border with Hungary.

Meanwhile, Ukraine International Airlines onboard personnel will wear rubber gloves and masks on flights from Italy.

In Poland's capital Warsaw, medical personnel are boarding planes from Italy for temperature checks before allowing passengers to disembark.

In Croatia, people returning from the virus-hit Italian regions will be questioned by border police, epidemiologists and sanitary inspectors.

And Serbia said it would introduce interviews and medical checks for passengers coming from “areas with a high transmission rate of the virus” in the past two weeks.

The country has earmarked 40 million kronor ($4.1 million) for the World Health Organization (WHO) to help countries cope with the spread of the virus.

Denmark has set aside 8 million kroner ($1.2 million) for the WHO crisis fund.