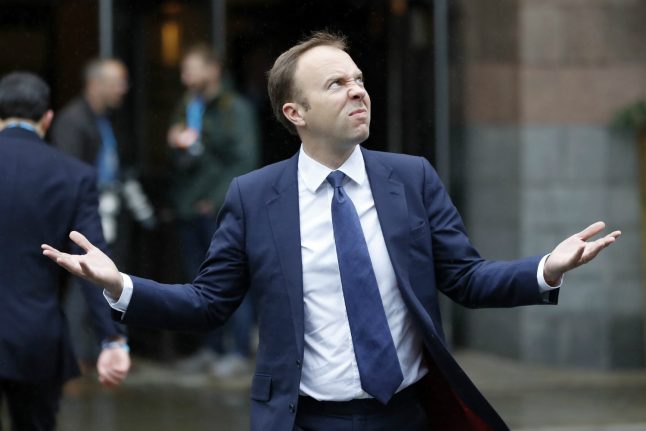 Matt Hancock would probably enjoy complaining about the weather like Germans do. Photo DPA

Germans love to complain about the weather

The German language has several compound nouns that describe bad weather by adding an adjective or noun to the word weather. Here’s how you can verbally prepare yourself, auf Deutsch, as the temperatures drop.

READ ALSO: ‘The first snow is in sight’: Germany to see sub-zero temperatures

One of the most common ways to complain about the weather in German is by using the word “Scheißwetter” (shit weather), which means horrible weather. Even though the word is used colloquially, it is still listed in the German dictionary Duden, and defined as “very unpleasant weather”.

A very colloquial way to refer to rainy weather is by using the compound word “Pisswetter”. The word is put together by “Piss”, literally meaning piss or figuratively rainy, and Wetter (weather). It is not actually considered a (dictionary) word but it is still frequently used.

“In this rainy weather we definitely need an umbrella.” This word adds “Hunde” (dog) to weather and creates a word which often describes rainy or very lousy, beastly weather.

The prefix “Hunde” is often added to words to give a negative connotation and to convey a sense of misery, such as in the word “Hundeelend” which means to feel very lousy, miserable or wretched.

“It is such lousy weather today, where no one wants to go out the door.

Here, “Drecks” (dirt) adds the sense of filthiness to the weather. This word describes the worst of weather, where no one wants to set a foot outside.

“I would not take the car out in this filthy weather.”

When adding “Sau” (swine, pig) to a word as a prefix it often refers to something dirty or serves as a intensifiers such as the word very. Here, it is defined as especially terrible and cold weather.

“Do I really have to go to the training today in this terrible weather?”

There are also several adjective, compound nouns, and verbs that are commonly used to describe bad weather. In its literal meaning, “oll” means old or rundown, but when referring to the weather it means nasty.

“It is so nasty outside. Do you want to go for a shorter walk with the dog today?”

READ ALSO: Readers’ tips: Your guide to getting through the German winter

This word defines as scabious or mangy. In this case though, it takes on the colloquial meaning and refers to mangy weather.

“Why is the weather so nasty in summer time?

This word offers a nicer way to say that the weather is not very pleasant. It means that it is uncomfortable and disquieting.

“In this uncomfortable weather tea is the best.”

If you really want to complain about the nasty weather, then you can say: “Das Wetter ist zum Kotzen!”, which roughly translates to “the weather sucks!”

(It is freezing cold outside. You have to dress warmer!)

“This ice cold weather is hurting my joints.”