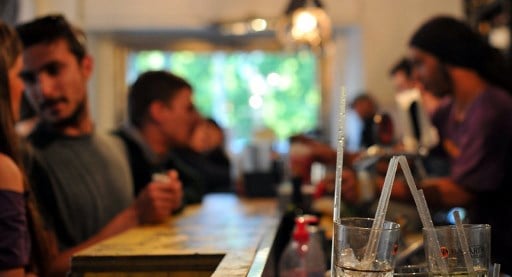 If you want to impress at Italy's cafes and bars, here's how. Photo: AFP

Pick up any fashion or gossip magazine in Italy and you'll notice almost every page has been liberally sprinkled with English words. But it doesn't stop there.

Just as certain English speakers believe that dining al fresco sounds fancier than eating outdoors (we don't recommend using this phrase in front of Italians, by the way), some Italians also seem to believe using an English word here and there will make them appear more sophisticated.

In fact, it's more than just the occasional word.
The use of these anglicismi increased by a massive 773 percent between 2000 and 2009 according to translation and editorial company Agostini Associati. Now,
one Italian language expert estimates there are 3,500 such words being dropped into the Italian language.
READ ALSO: The top ten Italian words that just don't translate into English
But beware – just because someone has thrown a random English word into conversation, don't assume this means they speak your language. They're likely to be horrified if you take their use of one English word as an invitation to start chatting to them in English.
And some of these words are used in ways that leave native English speakers perplexed.

The weirdest is when Italians take English words but then use them for something else entirely. One Italian couldn't believe that we didn't call channel surfing 'zapping' in England

Some more traditional Italians rage against Itanglese and the anglicizzazione of their language, particularly when such words then eclipse perfectly good italian terms.
Still, it looks like at least some of these English words are here to stay. So here's a quick run-down of jst a few of the English words and phrases you're likely to hear used around Italy – and what they actually mean to the Italians saying them.
Trendy – This word may now be embarrassing “dad-speak” as far as native English-speaking kids are concerned, but in Italy it's being preserved, like a linguistic time capsule. Describing something as “trendy” remains very much alla moda among fashionable young Italians.
Strong – another adjective beloved by young Italians. For reasons that remain a mystery, “strong” is often dropped in the place of forte.
Snob – This English noun somehow became an adjective in Italian; for native English speakers it can be jarring to hear a stuck-up person described as being “molto snob.”
Privacy – This word is so commonly used in Italy that some Italians will insist that it is in fact, Italian, and that no alternatives are available.

Baby – Not used to describe an infant, or bebè, but curiously deployed by the Italian press as an adjective, meaning “teenage” or “youth”. For example, groups of teen troublemakers are often described as a “baby gang” while 16-year-old Swedish climate activist Greta Thunberg is a “baby attivista”.

Job – We're not sure how this one came about, or why it's preferable to lavoro, but you will hear younger Italians say things like “sto cercando un job.”

Tax – Flat tax, sugar tax, plastic tax. Some Italian political commentators have jokingly asked if the English will be paying these new levies, being added to next year's budget.
It is a little hard to understand why these names are used, when the Italian tassa is almost the same. But Italian politicians are notorious for dropping anglicismi – see also “spending review”, “jobs act”, and “fake news”. Why? Perhaps they're just trying to show off, but some say it's because many politicians associate the English language with modernity – and capitalism.
Gossip – Italian has some great words for this popular pastime, including pettegolezzo, but the English word too is understood by almost everyone, and it even has a verb form: gossipare.
Sandwich – While English-speakers have adopted panini to mean a certain type of toasted sandwich (singular), here in Italy a sandwich can be just a sandwich, but with a heavy Italian accent.
Bye bye – if you're saying farewell you'd of course normally stick to ciao but sometimes Italians like to go English with a 'bye bye'. While this is something you might normally only say to children in the UK, here it's terribly sophisticated – and “molto British”,
Over the top – When I saw an Italian man at the beach with the words “over the top” tattooed in large letters across his back, I assumed he was just really extroverted. But I soon discovered Italians use this phrase to simpy mean “top”, as in “the best” or “extremely good”, rather than “taking things too far”.
This is just a short selection. If you have another favourite, please comment below and let us know.