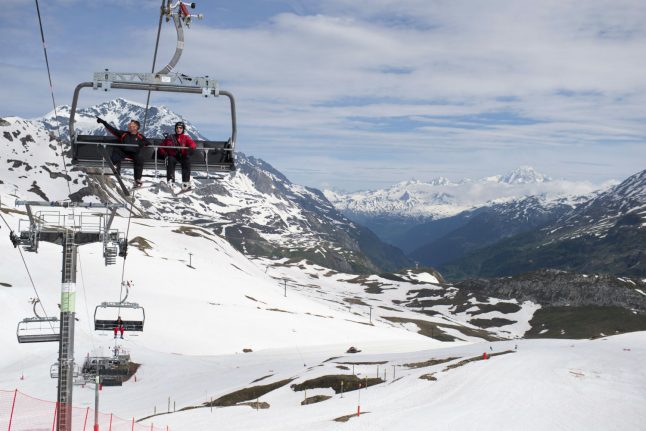 Hundreds of staff at a clutch of resorts in the Alps and Pyrenees walked out in response to calls for action by the CGT and FO unions, forcing some runs to be closed or partially closed.

They are concerned that reforms extending the required period of employment before people are eligible for benefits, set to take effect from April 1, could stop thousands of seasonal workers from claiming.

Some voiced their protest in song at the bottom of pistes at Serre-Chevalier close to the Italian border, chanting: “We're going down the mountain to get rid of Macron,” referring to French President Emmanuel Macron.

The French leader's attempts to overhaul pensions and welfare have led to months of bitter protests and strikes.

“Our situation will become even more precarious with these reforms,” explained Christophe Dupuis, who works as a ski patroller at La Plagne, one of the world's most popular ski areas.

“We will need six months instead of four before we can apply for unemployment benefit,” added Dupuis, who works as a lifeguard during the summer.

“We don't have six-month seasons, not least as the winter seasons are tending to get shorter rather than longer,” said Maud Goret, a seasonal worker and CGT member at Font-Romeu in the Pyrenees — where half the workforce had downed tools.

Many relatively low altitude resorts are suffering from a lack of snow owing to climate change, compounding fears over what the future holds.

As the workers voiced their grievances, further signs of the shortage of snow increasingly hitting resorts came as local authorities at Luchon-Superbagneres in the French southwest told AFP they had decided to have extra snow helicoptered in to three areas running short.

A union official said some 50 tons were being brought in for between 5,000 and 6,000 euros ($5,500-6,500) “in the knowledge that in terms of return on the investment you need to multiply that at least by ten,” for an operation lasting around two-and-a-half hours.

He added that it might not be a “particularly ecological” solution but “we had no choice” at the height of the season when many children in French are on half-term holiday.

TRAVEL
UPDATE: Where in Europe will it be possible to go skiing this year?