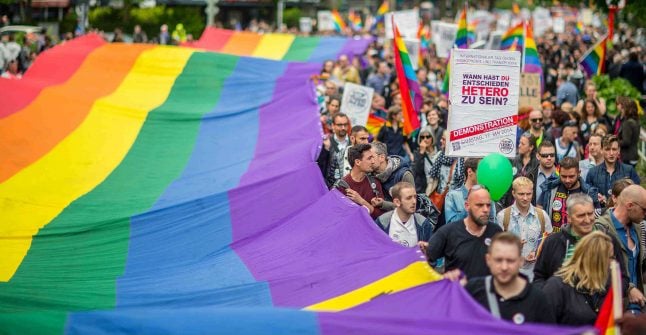 The Swiss Government updated the law in December of 2019 to include homophobia under current anti-discrimination statutes, thereby allowing for it to be criminally prosecuted.

Far-right groups have opposed the move, saying it would serve as a barrier on free speech – gathering the 50,000 signatures necessary to launch a referendum.

Switzerland will now go to the polls on the 9th of February to vote on the matter – along with another vote on affordable housing.

READ MORE: Why opposition to cheaper housing is mounting in Switzerland

Supporters of the criminalisation of homophobia

Although homosexual relationships are tolerated in much of Switzerland, the country lags behind its neighbours when it comes to affording same-sex groups legal protection.

The Criminal Codes of France, Austria, Denmark and the Netherlands, among others, include prohibitions on homophobic actions and words. In addition to having no criminal restrictions on homophobia, same-sex marriage is still not legal in Switzerland – a fact which stands out when compared to (most of) its neighbours.

Advocates of the ban argue that even where relationships are accepted, the failure to recognise them legally in an equal fashion leads to feelings of shame and in some cases self harm and suicide – particularly among younger people.

The major opponent of the new law is the Federal Democratic Union, a hard-right, religious party with little popular support.

Despite the party securing the 50,000 signatures needed to hold a referendum, it only commands around one percent of the national vote and has less than 3,000 members.

The FDU have argued that the law restricts freedom of speech and puts people at risk for sanction if the debate issues surrounding same sex relations.

In an interview published with Swiss website Swissinfo, the FDU distinguished between laws which restricted racism and those which restricted homophobia, saying that those in the latter category were not at risk of genocide.

No homo(phobia)? How do the Swiss feel on same-sex relationships

Despite widespread liberal attitudes to homosexuality in Switzerland, portions of the electorate remain opposed.

A poll from January 2020 showed one in ten Swiss consider homosexuality to be immoral, while more than 20 percent of the electorate indicated they were against same-sex marriage.

While this may represent a small portion of the electorate, the country is strong on issues of free speech – with the 50,000-strong petition to hold the referendum a clear indication that the outcome is anything from decided. 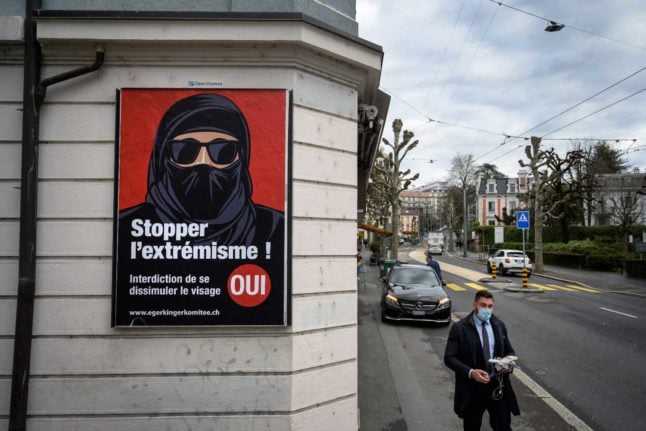 A year and a half after the March 2021 vote on face coverings, which was passed by a 51.2 percent majority, the government finally delivered its draft law to parliament for approval last month. Those caught in breach of the law, if approved in its current form, will soon face a fine of 1,000 francs.

If there was a political award for irony, the vote, known as the ‘burqa ban’ would be the overall winner. At a time when all Swiss residents were covering their faces in public due to Covid, a majority of voters accepted the principle that face coverings should be banned.

Not all face coverings, mind you, just face coverings worn for criminal or religious reasons. Switzerland does have a minor issue with rampages of masked people at sports events and demonstrations but, taking into account the religious focus of the organisation behind the campaign, the hooligan problem appears to have been tagged on for cynical reasons.

What the lumping together of the two groups does, accidentally on purpose, is cast Muslims as a threat to security. Even though the supporters of the burqa ban argue that only political Islam or extremists are targeted by their campaign, the Muslim community in general is stigmatised when posters of angry-looking veiled women are found on every street corner. It’s just another way of keeping xenophobia topped up.

READ ALSO: What impact will the burqa ban have on Switzerland?

Who is the law really aimed at?

It will take time for parliament to agree all the details of the law. The as yet unscheduled debate will provide another platform to the advocates of the ban, who are likely to be dissatisfied with what is seen at this stage as a watered-down version of the law they fought for. Calls to anchor the ban in the criminal code and fine offenders up to 10,000 francs were not heeded by the government.

Does Switzerland have an issue with Muslim women covering their faces in public? Not if you consider the make-up of the community. Some five percent of the Swiss population is Muslim, most of whom are immigrants or descendants of immigrants from countries where the niqab or burqa are not traditionally worn.

Ahead of the March 2021 vote, researchers from the University of Lucerne found that fewer than 40 women nationwide wore the niqab (veil covering the face apart from the eyes) and the burqa (which covers the entire body with a screen for the eyes) was not seen in Switzerland.

The research found that the small number of niqab-wearing women do not fit the stereotype of the poorly-integrated victim forced to hide her face from the world. Niqab wearers were more likely to be well educated or Swiss converts to Islam.

The burqa ban initiative took its cue from the canton of Ticino, which introduced a similar law in 2015 following a local vote. At the time, Ticino was welcoming 40,000 middle eastern tourists per year.

Either the tourists complied with the law or the law wasn’t really being enforced. In the first two years after the ban, charges were brought against only five women wearing veils in Ticino.

I don’t know who the winners are here, apart from the companies renting outdoor billboard space. After all the expense and high blood pressure, the signature gathering and heated debate, a problem that never really existed will continue to not really exist. One thing is sure, the state will never earn back its costs in fines.

For the record, it is worth noting where this campaign came from and who gains from all this publicity. The campaign is a project of the Swiss People’s Party spin-off, the Egerkinger Committee, the same association that delivered the successful minaret ban vote in 2009.

In its own words, the committee “leads and organises resistance against the claims to power by political Islam in Switzerland”. The association was founded in a hotel in Egerkingen in canton Solothurn from where it took its name (against the wishes of Egerkingen, as it turns out).

Switzerland is not alone in taking a hard line against the strictest version of Islamic dress codes. Neighbouring countries France and Austria, along with three other European countries, have already banned the wearing of the niqab or similar in public.

READ ALSO: What is Switzerland’s ‘anti-burqa’ initative all about?

There is an uncomfortable alliance between feminists who have long campaigned against religious practices that disproportionately restrict and control the lives of women, and right-wing nativists who would prefer not to have a Muslim population in their country at all. That overlap probably helped to swing the Swiss vote on face coverings.

Most people who grow up outside an extremely strict Islamic tradition, such as the culture of some Gulf states, feel unease at the idea of women covering their faces in public because they are women. At the same time, they feel unease at telling women how to live their lives.

This is the grey zone that unnecessary political campaigns like the burqa ban initiative exploit, creating laws that are tricky to enforce and helping no-one.