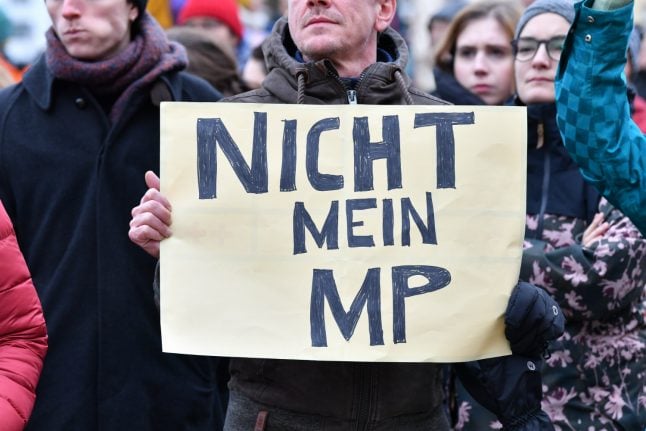 'Not my state premier': Protesters in Erfurt on Thursday. Photo: DPA

Thomas Kemmerich, from the liberal Free Democrats (FDP), said he would apply for the regional parliament to be dissolved in response to the outrage over his appointment, which drew comparisons with the rise of the Nazis in the 1930s.

“We want new elections to remove the stain of the AfD's support from the office of the premiership,” he told reporters, adding that his resignation was “unavoidable”. Kemmerich's election on Wednesday marked the first time in German post-war history that a state premier was heaved into office by accepting votes from the far right, crossing a red line in a nation haunted by its Nazi past.

He became the surprise winner of a run-off vote after AfD lawmakers ditched  their own candidate to back him, in what Kemmerich called “a perfidious trick” by the far right.

Christian Lindner, national leader of the FDP, one of Germany's smaller parties, said Kemmerich was right to free himself “from dependency on the AfD”.

But given the political storm, Lindner said it was necessary to reaffirm  his own position at an emergency meeting of the party's leadership in Berlin on Friday.

“I plan to call a vote of confidence,” he told reporters.

Chancellor Angela Merkel earlier called the vote “unforgivable” and said the result “must be reversed”.

She reiterated that her centre-right CDU would never work with the anti-Islam, anti-immigrant AfD, on a regional or national level.

The SPD and CDU are due to hold crisis talks in Berlin on Saturday.

Thousands took to the streets in cities across Germany late Wednesday to vent their dismay at the vote outcome, including in Berlin, Frankfurt and Thuringia's capital Erfurt.

Some carried signs that read “Never again” and “Voters betrayed”, while  others recalled that it was in Thuringia in 1930 that a Nazi minister was first allowed into government.

The aftershocks of the crisis were being felt elsewhere too, since Thuringian state lawmakers from Merkel's own CDU lined up with the FDP and far right in voting for Kemmerich over popular incumbent Bodo Ramelow from the far-left Die Linke.

In states across Germany's former communist east, the AfD is a major political force and mainstream parties are increasingly scrambling to keep it locked out of the corridors of power.

Since its creation in 2003, the AfD has gone from strength to strength in Germany, capitaliing on anger over Merkel's 2015 decision to allow in over a million asylum seekers.

At the last general election, the party scored almost 13 percent nationwide and won its first seats in the German parliament.

The Social Democrats' Walter-Borjans warned that the world was watching how Germany was dealing with the rise of the far right and the “breach in the dam” in Thuringia.