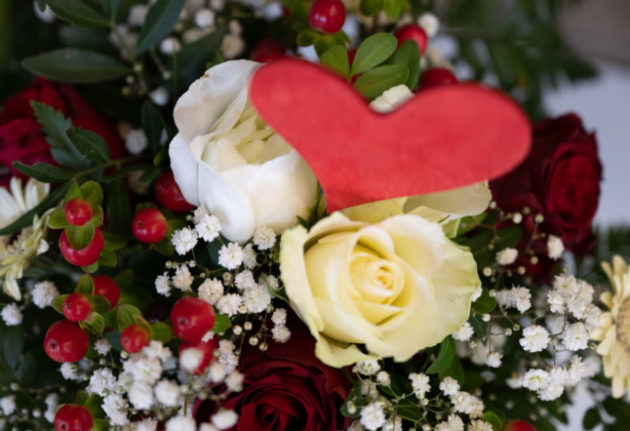 A man writes ich liebe dich, which translates to “I love you” underneath a red rose. Photo: DPA

Let’s jump in at the deep end. There are a few different ways to drop the l-bomb in German, and it is important to choose the one which strikes the right note.

Ich liebe dich (I love you) is better suited to a serious, long-term relationship than the colloquial hab’ dich lieb (love you/love ya lots), which can be used not only for your partner but also friends and family. Ich bin in dich verliebt is definitely only for a lover, but it isn’t as serious as Ich liebe dich.

If it feels right to respond with  “I love you too”,  just pop auch into the phrase, for example ich liebe dich auch, ich bin auch in dich verliebt, ich hab’ dich auch lieb.

Continuing with bold declarations of love, ich bin bis über beide Ohren verliebt literally means “I am until over both ears in love”. This better translates to “I am head over heels in love”. A couple sit together. Photo: DPA/TMN

Ever felt totally consumed by your emotions after being hit by cupid’s arrow? Find it difficult to think about anything else but your other half? In German you would describe yourself as being liebestoll, which means to be crazed by love or love-struck. A couple in their living room in Hanover. Photo: DPA

If you’re looking for a cutesy pet name, you have come to the right place. Take your pick from Liebste(r), Mausi, Schatz or Liebling, which all translate to something along the lines of love, sweetie, sweetheart or darling.

If you’d like to try something different for February 14th, Vielliebchen is a slightly dated way to call someone your valentine. This phrase means your’s is my heart alone, your’s is my entire heart or your heart is my delight. Much like saying I love you, it is also better suited to an established relationship, rather than a new one. Malu Dreyer, the minister-president for Rhineland-Palatinate, is photographed in February 2017 holding up a heart-shaped sign. Photo: DPA

But how to find someone to say these sickening things to?

All relationships have to start somewhere. If you feel things are going well with someone and you’d like them to become your partner, how better to ask them than with a simple willst du mit mir gehn?. This literally translates to ‘do you want to go with me?’. Another gem for the early days of dating would be ich steh’ auf dich, which simply means “I’m into you”. This is the perfect phrase if you’re looking to make your intentions known without getting too serious. Footballer Steffi Jones (left) with her wife Nicole at the Ball of Sports in 2013. Photo: DPA

Another way to make your feelings known to your significant other would be to say du bist mein Ein und Alles. This is the equivalent of ‘you’re my everything’ or ‘you mean the world to me’. Aww. Some passion-killing underwear hangs on a washing line in Berlin. Photo: DPA

On the other hand, if you really hate the idea of love, you might don some liebestöter or “love/passion killers”.

These large, sometimes knee-covering underpants (think long johns) are worn to keep away potential suitors by simply by being unattractive.

Another way to steer clear of the messy business of love would be to declare yourself a Hagestolz. This term usually describes an old bachelor who has chosen a life of solitude simply because they prefer being alone.

Germans are very connected to nature and a lot of the activities they routinely do, even in winter, involve staying outdoors. So it’s no wonder the language also reflects that passion for walking, travelling, and spending time in nature.

Some of the German words that are most famous to speakers of other languages reference this passion. Perhaps most notably, the term “Wanderlust” which has made its way to other dictionaries, including Merriam-Webster, with the definition “a strong longing for or impulse toward wandering”.

The word is composed of “wandern“, which means to hike or roam about and “lust“, meaning “pleasure or delight”.

READ ALSO: Holiday like a local: Five of the best camping regions in Germany

This is not the only unique expression the German language has related to travelling. Another of the hard to translate ones is “Fernweh“. It comes from “fern“, meaning “far”, and “Weh“, meaning “pain”. It is used to describe the longing for far-off places – in contrast to “Heimweh”, a feeling many immigrants might be very attuned to and could be translated to homesickness.

The German language also has several interesting and even funny expressions for walkers and travellers alike. The Local talked with German teacher and travel enthusiast Lutz Michaelis to collect a few of the best expressions.

“To wear the seven-league boots”. This means being able to walk long distances fast. Lutz explains that it was actually based on a trope in French mythology, in which magical boots could help the wearer cover long distances in a short amount of time. Having been used in The Little Thumb by Charles Perrault, the term was brought into the German language by writer Johann Wolfgang von Goethe.

The translation would be “he who rests, rusts”. It is used in the German language to say that being in motion is a good thing, not only with travelling but also to incentivise people to keep learning new things.

It’s a very common rhyme used to show the downsides and benefits of travelling: “travelling costs money, but one sees the world”.

It literally means that “travellers shouldn’t be stopped”. However, Lutz explains that the expression is not only used to refer to travellers but also to anyone that might be going through a transitional situation – such as someone wanting to change their jobs, for example.

One of the most beautiful ones, and many languages have their own version of it. It translates to “the road is the destination”.

Of course, coming back home, especially for those suffering from Heimweh, can also be something beautiful. One common saying is “Wiedersehen macht Freude“, which means that to meet again brings happiness, used among those looking forward to seeing someone again after a long trip.

In Germany, there is a common joke about finding German people abroad. The rhyme goes “Hüte dich vor Sturm und Wind, und Deutschen, die im Ausland sind“, which could be translated as “Be on your guard for storm and wind, and Germans in a foreign land”.

“It refers both to the bad behaviour of Germans on holidays or travels and a dark joke and a funny nod to the fact that German troops have invaded other countries”, Lutz, who is a German himself, explains.