Luigi Di Maio currently serves as Italy's foreign minister as well as the head of the M5S. Photo: John Thys/AFP

Di Maio, 33, announced his resignation at a party meeting in the afternoon, Italian newspapers said. It comes days ahead of a key regional poll pitting the M5S and PD against Matteo Salvini's rightwing populist opposition party, the League.

The League, which enjoys a significant lead in national polls, hopes that defeating the M5S and PD on Sunday in Emilia Romagna — a historic heartland of the left — will spark a crisis and bring down the government.

READ ALSO: 'Enough hate': Who are the protesting 'Sardines' packing into Italian squares?

A League victory would increase tensions considerably, with the PD likely to blame the M5S for refusing to join forces behind a single candidate — thus splitting the anti-Salvini vote. The governing coalition's main stabilising factor is a joint fear of snap elections which could hand power to Salvini.

The M5S was likely to perform particularly badly, according to the last polls ahead of the ballot.

Di Maio was expected to remain foreign minister, but reportedly told relatives “this is the time to take a step back, I am exhausted,” online Italian newspaper TIP said.

Like many before him, expect Di Maio to keep low profile for short while. He'll then repackage himself as an “outsider” that has to take on responsibilities for everyone's sake & the good old merry-go-round of “anti-establishment” politics shall restart from beginning again./END/

He has been head of the M5S since September 2017, but has faced mounting internal dissent as the movement loses popularity and lawmakers abandon it. Two more lawmakers said Tuesday they were quitting the party, which has haemorrhaged over 15 members since forming the coalition with the PD in September.

Senator Vito Crimi was slated to temporarily take over as chief ahead of a party conference due in March.

“This is a delicate moment for the M5S. We have to go forwards united, because if we split we condemn ourselves to irrelevance,” M5S minister Vincenzo Spadafora told reporters on Wednesday.

Co-founded by comedian Beppe Grillo, the movement initially claimed to be neither right nor left wing but the only “honest” alternative to establishment parties.

It initially refused any alliances. But March 2018 elections saw it become the biggest party in Italian politics with 32 percent of the vote, and the M5S eventually formed a relatively short-lived coalition with Salvini's League, before that ended and it joined forces with the PD.

Telegenic Di Maio is credited by supporters with turning M5S into a mainstream political force capable of allying with right and left, but critics have long derided him as a self-centred robot.

The Movement's popularity plummeted during its time with the League, and has struggled to recover. Some within M5S have called for the party to be restructured, saying the leader currently has too much power.

Political experts say the apparent ease with which the M5S swapped a marriage of convenience with the League for one with the PD has inevitably lead to fierce internal bickering.

“The Five Stars do not know what they are,” commentator Claudio Tito wrote in the Repubblica daily on Tuesday. “They are jerked this way and that by a constant oscillation between sovereignty and welfarism, between populism and moralism, between a visionary idea of the future and attachment to their political thrones.” 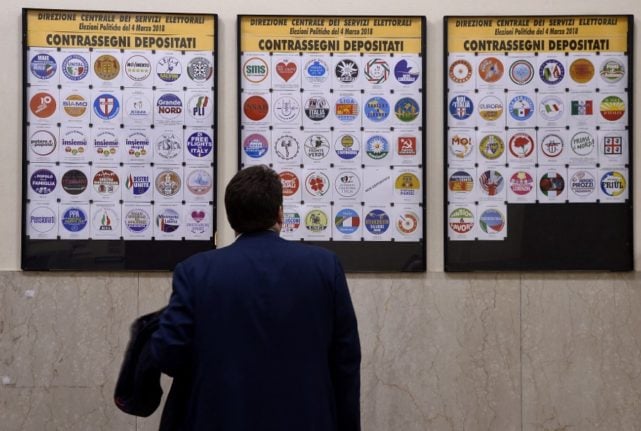 Italy is gearing up for an early general election on September 25th, and so far the number of different parties and alliances in the running can seem overwhelming.

While they won’t all be approved, a total of 101 political parties and movements submitted their symbols and leaders’ names to the Italian interior ministry on Sunday.

Meanwhile, parties are busy forging electoral alliances that include up to eight or nine members.

It may look chaotic, but a large number of small parties and numerous complex alliances is standard in Italy’s electoral system.

Here’s a look at why, how it all works, and which of the parties to watch. And we’ll try to keep it brief.

How many political parties are there exactly?

It’s not yet known for sure how many of the 101 political parties and movements which submitted their symbols and leaders’ names to the interior ministry on Sunday will be approved.

Those who go forward also need to collect the 36,750 signatures necessary for their candidates to stand for seats in the lower house of parliament, and a separate 19,500 to get onto the ballot for the Senate.

The parties now have until August 22nd to officially register their candidate lists, or liste elettorali.

These lists of prospective MPs are seen as vitally important, and as such are reported on in detail by Italian media: all of these names will feature on lists at polling stations, and voters have the option to name up to three individuals they want to support on the ballot.

Each list is headed by the party leader, who would then be that party’s choice for prime minister. But some – usually smaller – parties choose to link their lists together under one leader’s name.

With each passing day, the elections are getting closer and closer. Some parties, instead of running alone, decide to join forces and run as a common list. In this thread we will post some joint lists with the most important information and their members.#ElezioniPolitiche2022 pic.twitter.com/KQGkcknex2

Ok, so which of these parties do I need to know about?

At this stage, it’s safe to say quite a few of the 101 parties and movements mentioned earlier are not serious contenders.

The number of parties you’ll actually need to know about in order to follow the election race is much smaller (although it’s still more than the two or three some of us are used to following in our home countries).

READ ALSO: Who can vote in Italy’s elections?

As well as these, some small, lesser-lnown parties are also likely to be decisive in the outcome of the election, if not in the formation of the next government.

That includes groupings of several parties that have joined the large right- and left-wing alliances.

What are these alliances?

Electoral alliances between two, three or more parties are vital, because the way Italy’s political system works means it’s almost impossible for one single party to take enough of the vote to rule alone.

Italy essentially has a multi-party system – in contrast to the two-party system in countries like the US and UK – designed after the second world war (and Italy’s Fascist era) to prevent any one party from being in complete control.

So parties must team up and form these alliances with similar parties to fight elections. Then, they often have to join forces with yet more parties or alliances to form a government – often, these coalition partners are from a different part of the political spectrum. 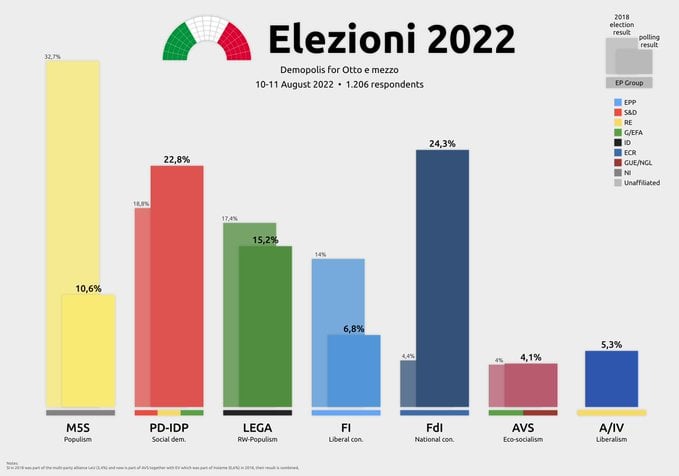 As a result, Italy has had a long series of fractious governments made up of numerous parties with vastly differing viewpoints (which, perhaps unsurprisingly, don’t tend to last very long).

Here’s a look at the three main electoral alliances in the running this time around, and the parties within them, as well as a few other contenders you may hear about in the news:

The so-called centre-right or ‘centrodestra’ alliance is led by the hard-right Brothers of Italy, the biggest party in Italy according to the latest opinion polls, along with the populist League, led by Matteo Salvini, and Silvio Berlusconi’s conservative Forza Italia.

These three heavyweights, predicted to take around 45 percent of the vote between them, have now been joined by a grouping of smaller, more moderate parties – a coalition within a coalition, if you will – who are running under one list.

This list is named Noi Moderati (‘we moderates’), and is made up of the following small parties: UDC, Coraggio Italia, Noi con Italia and Italia nel centro.

Altogether, the ‘centrodestra’ alliance is essentially the same one that came close to winning the last election in 2018.

On the other side of the ring sits Italy’s second-largest party: the centre-left Democratic Party (PD), which is polling just behind FdI but hasn’t formed similar powerful alliances that would make it a credible challenge to a right-wing landslide.

The centre-left alliance, called the PD-IDP, is made up of four different lists, or groupings of similar small parties:

All these parties together are currently expected to take around 32-34 percent of the vote.

After breaking an agreement to ally with PD, centrist party Azione formed a pact with Matteo Renzi’s Italia Viva to create a third alliance, which they called “a third pole” and described as a “pragmatic alternative to the bi-populism of the right and left”.

The two are currently running together along with a smaller party, Lista Civica Nazionale.

The so-called A-IV alliance is currently polling at five percent.

The party is significantly diminished since it shot to power on the protest vote in 2018.

After several years of hemorrhaging support and recently splitting as former leader Di Maio left to form his own party, Impegno Civico (which is running as part of the centre-left coalition), M5S is expected to take around ten percent of the vote – sharply down from 32 percent in the 2018 elections.

Who else is out there?

There are currently dozens of new and unaffiliated parties out there, though very few are likely to reach the number of signatures needed to appear on the ballot.

Some of the more notable smaller parties and movements could take a small share of the vote each – though it’s unlikely to be enough for them to obtain representation in parliament.

The better-known of these parties include single-issue parties like Italexit (Eurosceptic), which is currently polling at three percent.

There’s also the Partito Gay (campaigning for LGBTQ rights) as well as anti-establishment groups such as the Movimento Gilet Arancioni (Orange Vests Movement), while many of Italy’s most prominent politicians, such as current health minister Roberto Speranza, also lead their own small parties.

Find all the latest news on Italy’s election race here.