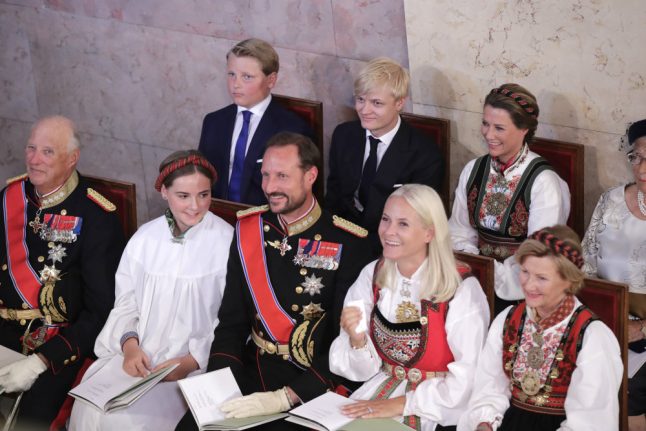 British royals the Duke and Duchess of Sussex are at the centre of quite the stir in the UK following their announcement last week that they want to “step back” from frontline royal duties and become self-funding.

Some have argued that, when the fuss dies down, ‘flexi-royal’ role for the Sussexes could be a way of modernizing the British monarchy.

But what is Norway’s take on royals near and close to the throne mixing royal and non-royal duties? A closer look shows there is some precedent in Norway for scaled-back, more independent royals.

Here we provide an overview of some of the most senior members of the Norwegian royal family outside of King Harald V and Queen Sonja. The direct heir to the throne, Crown Prince Haakon is, at the time of writing, serving as stand-in Norwegian regent while King Harald is in hospital. It is not the first time he has done so, famously giving the New Year’s Eve speech in 2003, normally the duty of the monarch.

In addition to studies at Berkeley and the London School of Economics, Crown Prince Haakon spent some time in 1999 working as an intern with Norway’s delegation to the UN.

He takes part in a large number of official engagements on behalf of the royal family and is particularly engaged with businesses, youth issues and the environment. He is often involved in Norwegian delegations abroad with the aim of improving the country’s international relations in these areas.

The Crown Prince also has a series of prestigious military ranks. He can be considered the face of the Norwegian monarchy, and its official representative junior only to the King and Queen. The Crown Princess married Crown Prince Haakon in Oslo in 2001. At the time, their engagement was the subject of considerable negative reaction in the Norwegian media and public. She was a single mother who did not come from a noble background and had admitted to having had a “rebellious phase” in her youth.

She has since become a popular royal in Norway, but was recently in the news for the wrong reasons after being forced to apologize for meeting with the convicted sex offender Jeffrey Epstein. The issue is not on the same scale as the scandal surrounding the UK’s Prince Andrew.

Any negativity over that is probably outweighed by sympathy over her health struggles: in 2018, she revealed she is a sufferer of a rare chronic lung disease.

She is prominently involved in official royal duties, including as patron of the Norwegian Red Cross and has served as UNAIDS special representative. The oldest child of Crown Prince Haakon and Crown Princess Mette-Marit, Ingrid Alexandra celebrates her 16th birthday next week. She is second in line to the throne after her father.

She went to Oslo International School from 2014 until 2019, when she started at the Uranienburg upper secondary school in the Norwegian capital.

In 2016, she opened the Prinsesse Ingrid Alexandras Skulpturpark the Palace Park in Oslo, with sculptures made for children and by children including its characteristic ‘Roggbif’ rainbow statue. King Harald’s oldest child is Princess Märtha Louise. However, the princess is only fourth in line to the throne, behind her younger brother Haakon and his two children, Princess Ingrid Alexandra and Prince Sverre Magnus.

Until 1990, succession was only given to male descendants, so she had no inheritance rights to the throne at all at the time of her birth.

This practice was ended by a 1990 constitutional change to absolute primogeniture – succession by order of birth only, not gender – from the current King’s grandchildren onwards, and male preference succession for those born before 1990.

Märtha Louise is therefore the last Norwegian female royal to be ranked lower than a younger, male sibling.

Not a member of the royal house, Princess Märtha Louise is an active businesswoman in the private sector and takes part in a relatively small number of official engagements.

She has paid income tax since 2002 and the King, after consulting her, issued a royal edict which removed her Royal Highness title. That has enabled her to work with more freedom from her constitutional roles, although she does still take part in official royal engagements and is a patron of eight different charities.