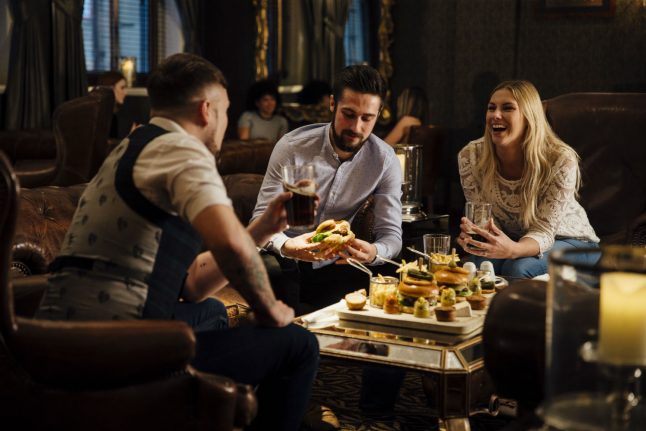 Friends chatting over a "Bierchen" at a pub. Photo: Depositphotos/DGLImages

When first meeting up

Starting the night off, you'll want to greet your friends or company appropriately.

Sometimes you'll find these phrases condensed into a “Geht’s gut?” (“You good?”) or simply “Läuft’s?” (“Is it going?/Things going well?”).

“Wie geht’s?” can be used with someone you have not met before – a friend of a friend, for example – because it's less personal than “Na, wie läuft’s?”

This latter phrase, or simply “Läufts?”, is used more commonly with good friends, as it implies that you know what is going on in their lives. They can then directly respond to that, rather than just saying something superficial such as “Mir geht's gut” (I’m good) or “Alles gut” (all good).

So when you ask your best friend “Läuft’s?” he could reply: “Ja, meine neue Arbeit läuft super gut” (“Yes, my new job is going really well”).

This word Läuft by itself can also be used as a reply to indicate that everything is going really well.

You could also say “Läuft” or “Läuft bei dir” as a response to an action of someone else that you approve of, or view as funny or cool – for example, if your friend receives a drink for free.

Essentials during the night

Looking for the right words to fit in during the night? Terms such as “Digga” (often used when something unexpected or noteworthy occurs) or “Brudi” (bro) are terms of endearment commonly used when speaking to friends.

But be careful who you call “Digga” or “Brudi”. If you don't know a person, it could come across as disrespectful.

“Bierchen” (diminutive form of beer) is a vital word to know, as Germans love their beer.

Phrases such as “Willst du ein Bierchen?” (do you want a beer?) or “Soll ich dir auch noch ein Bierchen mitbringen?” (Should I also bring you another beer?) will always come in handy if you want to sound polite before heading up to the bar.

“Feiern” (celebrating, partying) is an essential word in Germany. It not only means partying in the sense of having a good time with your friends at home, or going to a party that someone is throwing at their house, but predominantly it refers to going clubbing.

“Do you want to go clubbing tonight or to a bar?” Two men having a conversation at a bar in Mannheim. Photo: DPA

“Gönn dir” (indulge/treat yourself) is also a popular phrase which you would only say to closer friends. It could be, for example, your response when your friend grabs two drinks for himself.

The phrase has a humorous connotation and underlines that you approve of a situation – or encourage it. It is often said as a response to something that is slightly overdone.

“Klopfer” (knocker) is a key word for a night out that involves drinking. It refers to a kind of shot (liquor) that comes in small bottles with various flavours such as plumb or fig.

When the night is over

After a night of “feiern” you might say “Komm gut nach Hause” (get home safe) – a common phrase you say to someone when parting on you way home. It's friendly but not too informal, meaning that you can say it to anyone from close Kumpel (pals) to people you just met at the ban.

On the other hand, “Ich hau rein” – meaning that you're leaving – is very colloquial, and only something you would say to people that you have known for a while, or feel like they are easygoing.

But not everyone uses this phrase. So if you are unsure, just stick to “komm gut nach Hause”.