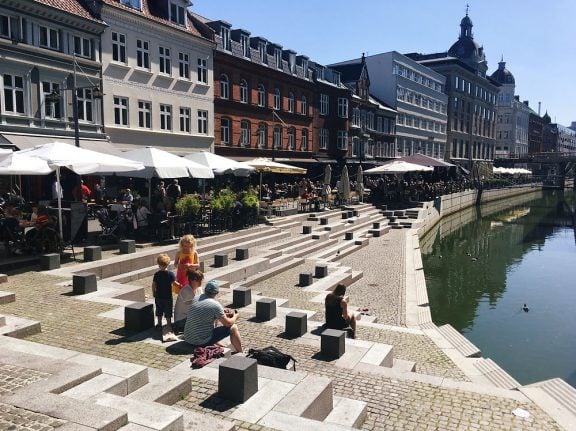 A-Bar Aarhus is located on the city's central Åboulevarden. Here a summer view of the area. Photo: Nina Chestney/Reuters/Ritzau Scanpix

Bushfires have devastated swathes of Australia in recent weeks, with over 23 fatalities, thousands of homes destroyed and as many as one billion animals killed, according to reports.

The Australian Bar, also known as A-Bar Aarhus, published on Instagram earlier this week a post offering to donate 1 krone “to save Australian forests and animals” for every new follower on the social media site, and 1 krone for every repost in followers’ stories.

The same campaign was posted on the bar’s Facebook page.

A series of critical responses were posted by social media users, accusing A-Bar of coat-tailing the environmental disaster in an effort to gain advertising traction and online influence.

One commenter on Instagram wrote that the post was “directly grotesque to take advantage of a natural catastrophe for likes”, while another called it “a new way to get new followers, thanks to five million burning hectares”.

Others asked A-Bar to specify where money would be donated, given that this was not mentioned in the Instagram and Facebook posts.

Some Instagrammers were supportive, telling critics to “stop hating and spread love instead”.

The bar subsequently published a follow-up post on Instagram in which it recognized the promotion had “divided opinions”.

In that post, A-Bar wrote that it would donate money to the Australian Red Cross.

But that did not go far enough in recognizing the insensitive nature of the original campaign, according to an Aarhus-based Australian who spoke to The Local.

“I am grateful that people are getting behind this tragedy and organising donations but there is a right and wrong way to do it. Using ‘news-jacking’ which is what is happening here shouldn't be used in correlation with tragedies,” said Michael Burns, who moved to the Danish city in 2017 from the Shoalhaven, one of the areas impacted by the fires.

Raising money “through the sale of beer” or by a fundraising event “instead of a campaign to boost their marketing abilities” would have been far more acceptable, Burns said.

“In addition, once it was brought to light that there was an issue caused by the campaign the CCO of the company could have called it off and or adjusted the campaign in order for damage control. Instead they have decided to continue, offering very little in the way of consideration or respect to the issue,” he added.

Burns called for “an official apology and acknowledgement of the wrong-doing”.

A-Bar is part of Rekomgroup, a bar and nightclub company which owns a string of establishments in Denmark.

Speaking to The Local, Rekomgroup CCO Lars Mejlgaard acknowledged that A-Bar had received criticism for “asking people to give us something in return” for donations to the cause.

The approach used was intended to encourage engagement, Mejlgaard said.

“It was a matter of trying to make a competition to see how much we could raise. (We) could have made it by liking a picture or various other ways, but it was just a matter of seeing how well we could get people to be a part of this, let’s call it a competition,” he said.

Given the chance to run its campaign again, A-Bar would do things differently, the CCO said.

The criticism “has given us food for thought on future competitions or donations, absolutely,” he said.

A hypothetical fundraising campaign in future would include “more details in the communication about what we are supporting.”

“We would not do it exactly as we have done it now, that’s for sure. How we would do it in the future I’m not sure yet, but we have of course acknowledged that some people have criticized us and said it’s a too commercial way of doing it,” Mejlgaard said.

The company has set a target of donating “at least 20,000 kroner” and has already exceeded this, the Rekomgroup CCO said. He added that the campaign will continue to run until midday on Friday.

Burns told The Local that “donations are by far the best way at the moment, this far away from the events, to help those impacted get back on their feet.”

Danes were the least sceptical of the eight countries surveyed. Photo: Dado Ruvic/Reuters/Ritzau Scanpix
According to the latest update from Aarhus University's ongoing How Democracies Cope with COVID19 (HOPE) project, only 51 percent of those surveyed in Denmark described themselves as “completely certain” they would be willing to receive a vaccine,  with a further 31 percent saying that they were partly certain.
Michael Bang Pedersen, the Aarhus psychology professor who leads the project, said that, while worrying, respondents from Denmark were more positive to vaccines than those of any other nation.
“The Danish results look pretty good, the Swedish figures are less good, and some of the results from France are extremely worrisome in my view,” he told The Local.
“So I think there's a massive communication task in front of a lot of national health authorities, including the Danish one.”
Only 38 percent of respondents from France to the study said they were “completely certain” they would take a vaccine.
Here are the figures for the eight nations surveyed, from left to right: France, Hungary, USA, Germany, Sweden, Italy, UK, Denmark. Bang Pedersen said that some uncertainty was unsurprising.
“At this point, some uncertainty is to be expected, because we don't know what the features of the vaccine will be, how effective it is, and what the side effects will be,” he said.
“I think that part of the communication task for the authorities will be to acknowledge the uncertainty and to say, 'even if you are uncertain it doesn't mean you are anti-vaccine, and we are going to show you that the vaccine is safe despite those uncertainties.”
He said that the another obstacle could come if young people feel that because they are at too low a risk of becoming seriously ill from coronavirus to make receiving a vaccine worthwhile.
“They might think, 'I don't think I'll get a vaccine, because I'm not at risk myself'”, he said.
The solution, he said, was to make sure people were “informed about the logic of herd immunity”, and also made to feel empathy with people in vulnerable groups.
Finally, he said governments should already be starting to counteract misinformation about vaccines, and educating their populations to make them less susceptible to counter “fake news” in the internet.
The responses in the report were collected between September 13th and October 3rd.
SHOW COMMENTS
Url copied to clipboard!