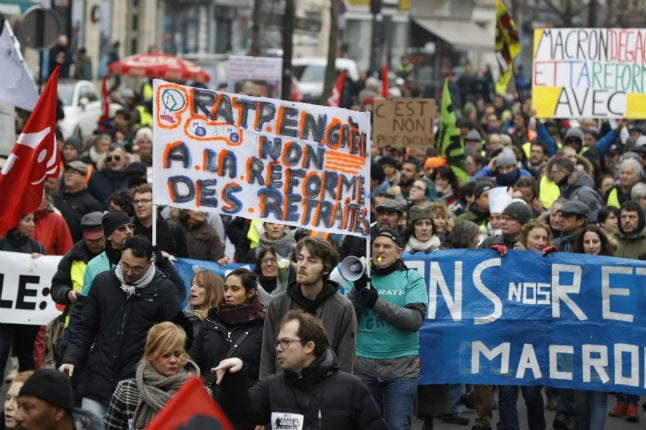 Thousands of marchers made their way to the Bastille Square. Photo: Francois Guillot/AFP
Some protesters donned the yellow vests which over the past year have become symbolic of opposition to Macron's attempts at reforms he says will rationalise France's 42 separate pension regimes into a single points-based system.
Unions reject the scheme saying it would require millions of people to work beyond the official retirement age of 62.
The marchers set off after midday from the Gare de Lyon railway station in eastern Paris behind a giant banner reading “”Macron, withdraw your project; save and improve our retirements,” heading for Gare de l'Est, four kilometres (2.5 miles) to the north, an AFP reporter said.
Reaching the opera house at Bastille square, some demonstrators shouted “we don't want the grandfather clause”.
The Local's managing editor Ben McPartland was caught up in a confrontation between riot police and another, minor Gilets Jaunes march near Gare du Nord.

And then the tear gas came… lots of travellers and parents with kids caught up in skirmish… pic.twitter.com/ZYYuK2Td9c

He said the confrontation had began when a couple of hundred protesters went into the busy station.
“Riot police arrived and blocked the main access to station. Outside around 20 to 30 masked youths began pulling down street signs and pulling huge plant pots and bins into the street,” he said. “The police seemed unaware for a while. Then they formed a line and fired teargas. Lots of by standers and motorists were caught up in it.”
The grandfather clause chant referred to proposals for new opera dancers to lose the current generous pension benefits enjoyed by older colleagues who can currently retire at 42.  So far, more than 60 performances at the Paris opera's historic Garnier and modern Bastille stages have been cancelled, leading to losses of more than 12 million euros ($13.4 million) in ticket sales.
Several other professions, including train drivers, also enjoy special pension provisions. Macron wants to simplify the system and is banking on support falling for the strikers the longer the disruption goes on amid what is now the longest continuous train strike in French history.
A new poll published Friday showed a majority of 61 percent still support the strike, although that was five points lower than a December 19 survey, according to pollster Odoxa.
Unions have called another day of mass demonstrations for Thursday, when teachers, hospital workers and others are expected to join the strike.