Pablo Iglesias, leader of the far left Podemos party, celebrates a coalition deal agreed with Prime Minister Pedro Sanchez (right) on Monday. Photo: Gabriel Bouys/AFP
A key Catalan separatist party now looks set to back Sanchez's bid to stay on in power.
Sanchez's Socialists have already struck a deal with far-left party Podemos to form a coalition government if he wins a confidence vote in parliament following the debate.
That would put an end to months of political deadlock in the eurozone's fourth-largest economy, which has held four general elections in four years.
Parliament speaker Meritxell Batet on Tuesday informed party representatives that the investiture debate will take place on January 4 and 5, with an extra session slated for January 7 if needed, the assembly said in a statement.
The rare weekend session of parliament coincides with the celebration of the Epiphany on January 6, the day Christians observe the visit the Three Kings made to the baby Jesus.
Sanchez needs an absolute majority of at least 176 lawmakers in the 350-seat parliament to take office in a first confidence vote which is expected to take place on January 5 after the investiture debate ends.
If he fails this first vote as expected, a simple majority is needed in a second vote that will be held 48 hours later on January 7.
His Socialists won 120 seats in a repeat general election on November 10 — three fewer than it won in April — while Podemos has 35 seats leaving him far short of an absolute majority.
But the Socialists have also secured the backing of several other smaller formations while Catalan separatist party ERC, which won 13 seats in last month's polls, has said it is willing to abstain from voting which would be enough to allow Sanchez to win the simple majority he needs in the second investiture vote.
'Opportunity for separatism'
The ERC — whose leader, former Catalan vice president Oriol Junqueras, was sentenced in October to 13 years in jail over his role in Catalonia's failed 2017 independence bid — will make its final decision during a meeting of the party's national committee on Thursday.
The ERC has said the Socialists have agreed to set up a negotiation table between Spain's central government and Catalonia's regional government to find “a democratic solution to the conflict” over Catalonia's independence drive.
“It is difficult for us to trust the Socialist party and the Spanish State but we believe it is an opportunity for separatism which we want to take advantage of,” ERC spokeswoman Marta Vilalta said Monday.
Catalonia has been rocked by protests which sometimes turned violent after Spain's Supreme Court in October sentence Junqueras and eight other Catalan leaders to lengthy jail terms over their role in staging a banned secession referendum in 2017 in the wealthy northeastern region which was followed by a short-lived declaration of independence.
ERC had demanded a goodwill gesture for Junqueras from the Spanish state and on Monday Spain's state attorney said Junqueras should be temporarily released to collect his European MP credentials.
Junqueras won a seat in the European Parliament in May elections, despite being in pre-trial detention in Spain but he was prevented from leaving prison in June to attend a swearing-in ceremony.
Spain has never had a coalition government. The Socialists and Podemos have pledged higher taxes for banks and wealthy Spaniards if they take office, prompting warnings from business leaders that they will hurt the economy. 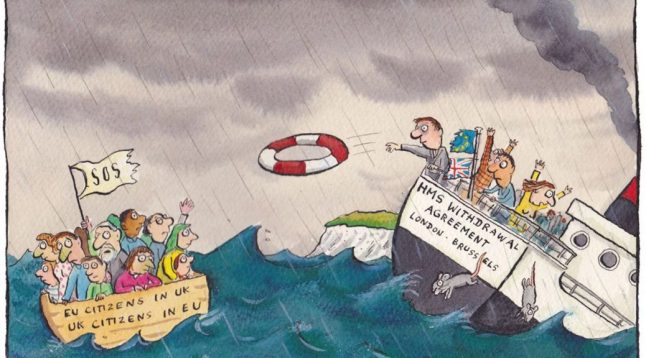 BREXIT
OPINION: This is the last chance to show Brits in the EU matter more than Cheddar cheese
Url copied to clipboard!