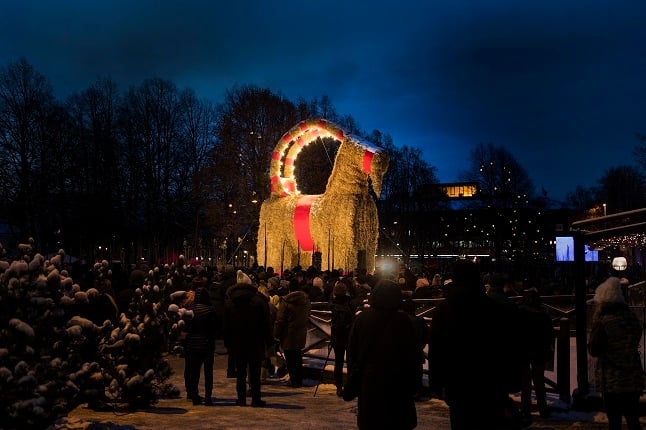 Each year on the first weekend of advent, the large Christmas goat is set up in the central Slottstorget square, attracting media attention and visits from thousands of locals and tourists.

The big question on everyone's lips is whether the oversized decoration will survive the festive season. It has been burned down 29 times since it first appeared in 1966, and damaged in other ways a further eight times.

Despite, or very likely because of, its unlucky past, the goat remains the main festive attraction in Gävle as visitors speculate whether it will make it through the year.

This year, the inauguration drew thousands of visitors, and the goat itself has been rotated 180 degrees to give everyone a better view of the Christmas icon.

Goats are a common motif in Swedish Christmas decorations, and the Christmas goat or julbock was the traditional bringer of gifts before the popularization of jultomte, a blend of Santa Claus and a Swedish folklore gnome.

If the goat survives until January, it will make three years in a row of getting through the Christmas season unscathed. Guards keep a close eye on Gävlebocken day and night and security has been tightened since 2016, when it was burned down just hours after being set up. The goat's official spokesperson, Maria Wallberg, told the TT news agency that she wasn't worried its survival would lead to lower interest in the tradition.

“The Gävle goat is of course known because of the fires and attacks, we realize that. But now it's an internationally known symbol of Christmas which attracts interest on its own,” she said.

“It's very important for the city's economy that the goat stays in place during Christmas time. Otherwise, maybe not so many people would choose to come here.”