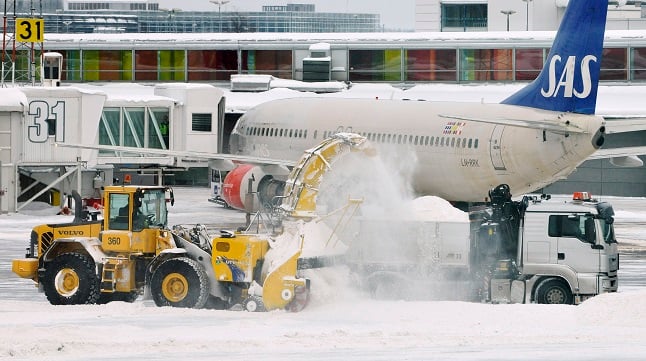 Before 10am, at least 15 flights had been cancelled with many more expected to leave later than planned.

Many other flights were affected by delays caused by snow and strong winds, which meant only one of the airport's two runways was in use.

“Today there may be disruptions to flight traffic to and from Stockholm Arlanda Airport. The cause is the weather, with strong winds and snow,” Swedavia wrote on its website.

Most of the cancelled flights were domestic routes, for example to Umeå, Malmö and Gällivare. International flights to Hamburg, Oslo, Munich, Frankfurt, Vienna and Helsinki had also been cancelled. The most up-to-date departure times can be found on the Arlanda airport website.

A Class 1 warning for snowfall, the least severe on a three-point scale, was issued by national weather agency SMHI on Friday for central Sweden, which includes the Stockholm and Uppsala areas as well as Västmanland, Örebro, Östergötland, northern Jönköping county and northern Västergötland.