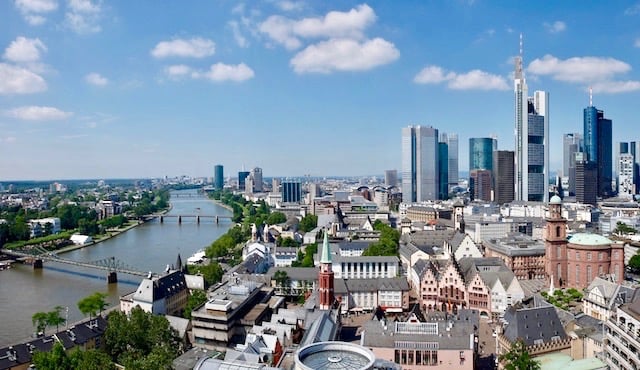 It’s anything but, says Frankfurt School alum Vanessa Fischer, who has lived there for nearly seven years.

“There are so many things to do! Besides all the museums, there are many markets and street festivals. We are close to the wine region so there are a lot of wine events in late summer. In winter, we have the Christmas markets and all year round you can go to Berger Straße in Frankfurt’s Nordend where there are many places for food and drink.”

Vanessa, who now works as a Venture Analyst at KION Group, completed her MBA at Frankfurt School of Finance and Management in 2018. It was her ambition to work internationally and she saw the MBA as a way to help her realise it. Frankfurt School particularly appealed to her because of its popularity with international students. During her studies, of the fifty people on her program, only three came from Germany.

The school’s impeccable reputation both locally and globally played an important role in Vanessa’s decision. She planned to live and work in Frankfurt following graduation, and knew an MBA from such a well-respected institution would be an effective stepping stone. “In Frankfurt, if you’ve attended Frankfurt School, it’s like a fast track. Employers know you have a certain quality in your education. It gives you a big advantage.”

The business school gives students a further head start by organising events such as its annual Career Day to acquaint them with companies they aspire to work with. Vanessa says that many companies also plan workshops and networking nights so there are plenty of chances to connect with employers.

“If you would like to, you could go to professional meetings almost every day,” she tells The Local.

She adds that English is widely-spoken and her MBA classmates didn’t experience a language barrier. As a global finance centre many companies have English as the main language and today Vanessa works entirely in English alongside her American and Chinese colleagues.

Vanessa may have graduated but she’s still a regular at the business school. Several Frankfurt universities have campuses in a row which has resulted in a lively student area with plenty of coffee shops and restaurants. It’s also right next to Grüneburgpark which Vanessa describes as “the perfect getaway on hot summer days.” Moreover, the campus is a stone’s throw from Frankfurt’s Nordend where there’s everything from boutiques to chocolate shops as well as Vanessa’s favourite cafe Zeit für Brot.

“Frankfurt is a big city with an international airport but it’s not as big as London or Paris, so it’s very convenient. You can do everything by bike, when you go from the east end to the west end it takes fifteen minutes. You always see people you know, which is very rare in big cities.”

‘What Frankfurt has to offer is culture, nightlife and arts’

For Julian Coley, now associate director of IPONTIX Corporate Finance, getting his master’s degree in Finance from Frankfurt School was a no brainer.

“In 2014, Frankfurt School was ranked 20th worldwide for finance. During my previous studies at Goethe University, I wanted to dig deeper into finance and had been looking for schools with well-known lecturers. Frankfurt School had a few and this was a reason for my application – it was evidence of quality.”

Find out more about the master's programmes at Frankfurt School

Julian graduated with more than a master’s degree. He also made many lifelong friendships and today describes the alumni community as “one big family”.

“The community is still really, really close. I still spend nearly half of my week with friends I met at Frankfurt School. If I have a short lunch break we get together downtown or we have a classic afterwork meeting.” Julian often meets friends around the Freßgass, a pedestrian zone in the Innenstadt district. It’s known as Frankfurt’s culinary hotspot and home to many restaurants and bars, including The Parlour, which Julian describes as one of the city's “secret bars”.

“When you move to Cologne, Berlin or Munich, you know where to go from the moment you enter the city,” he says. “But in Frankfurt, many bars don’t have signs. When you know about them though, in my opinion, you have more variety than anywhere else in Germany. It’s why I prefer Frankfurt.”

Julian adds that in his opinion Frankfurt is a city that has two sides to it.

“On the one hand, you can be out in the glamorous clubs. On the other hand, there’s a large red light district near the central station which has transformed over the last five or six years. Now there are lots of cool restaurants, small bars such as the Pracht and Maxie Eisen and some really good clubs.”

There’s also a thriving arts and electronic music scene with raves in the park every weekend over the summer. Julian says good spots to experience this dualism are the Kunstverein Familie Montez art gallery and the Atelierfrankfurt art centre which doubles as a nightclub and marketplace for artists and designers. “What Frankfurt has to offer is culture, nightlife and arts. Those are things you find across the entire town, you just have to open your eyes to it,” he says, mentioning that “no matter what you do or where you go, nobody in Frankfurt will care about your skin colour, your ethnicity or your religion.”

He agrees with Vanessa that young, ambitious students in Frankfurt can attend professional events every evening if they chose to. There are many paths into a future career, most notably Frankfurt School’s Career Services department, which offered nearly everything Julian needed to improve his network such as career days, fairs, presentations, seminars, fireside chats, workshops and panel discussions.

“They also have a really large database in which all Frankfurt School students and alumni are registered,” he says, adding “it’s where I personally recruit my staff.”

This article was produced by The Local Creative Studio and sponsored by Frankfurt School.