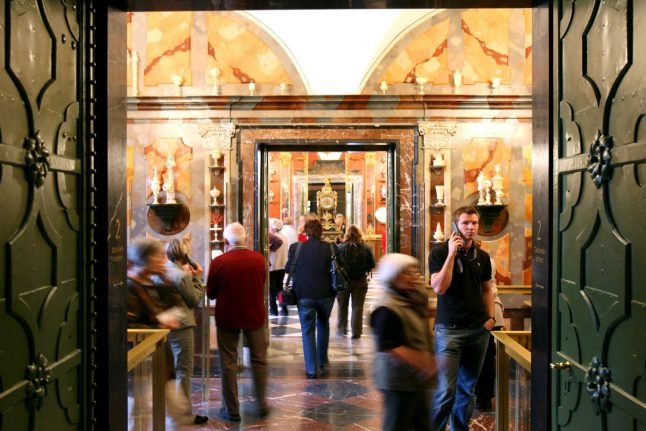 The Green Vault at Dresden's Royal Palace, which is home to around 4,000 precious objects made of ivory, gold, silver and jewels, was broken into early Monday morning.

Police confirmed a “break-in at the Green Vault” and said the thieves were on the run.

The theft was described as the biggest art theft since World War Two.

Officials did not give an estimate but Bild newspaper reported that “antique jewellery worth around a billion euros has been stolen”.

Ackermann refused to estimate the exact value of the items stolen from a display cabinet at the near 300-year-old Green Vault museum in Dresden, adding that the jewellery was of “inestimable cultural and historical value”.

Bild reported that the criminals had broken into the well-protected palace by attacking a nearby power distributor and climbing through a window.

They then proceeded to target smaller items of jewellery, leaving larger, bulkier items behind, Bild claimed, without citing sources.

The Green Vault is one of the oldest museums in Europe, having been founded by the August the Strong, Elector of Saxony in 1723.

One of 12 museums which make up the famous Dresden State Art Collections, the vault is split into a historic and a newer exhibition.

The historic section, which contains around three quarters of the museum's treasures, was the one broken into on Monday.

Its treasures include a 63.8-centimetre figure of a Moor studded with emeralds and a 547.71-carat sapphire.

The theft is the second high-profile heist in Germany in recent years, after a 100kg, 24-carat giant gold coin was stolen from Berlin's Bode Museum in 2017.