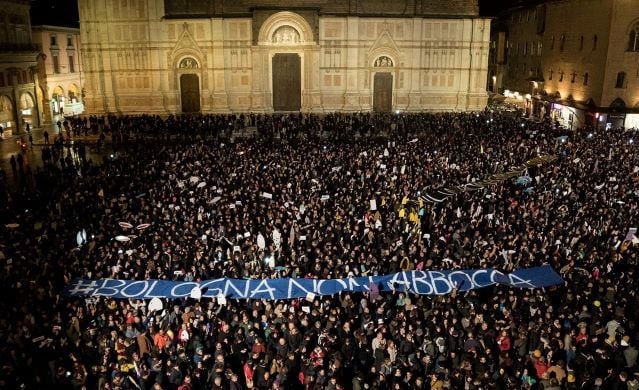 It wasn't their first gathering. But after an estimated seven thousand people packed into a square in the northern Italian city of Modena on Monday night, Italy started to sit up and take notice of the protesters calling themselves “sardines” who seem to have appeared almost from nowhere.

One of the organisers said the idea was born last week when he and three old friends, while eating dinner together, decided to protest against the politics of right-wing opposition leader Matteo Salvini and his planned visit to the city.

The group requested “no flags, no [political] parties, no insults” at their “flash mob” protest in Bologna's main square, Piazza Maggiore, and asked that any banners should depict only their chosen symbol: sardines.

“We wanted to give the message that we will be packed tight like sardines, because we will be many,” one organiser, Mattia, told Italian media.

Sharing details of their planned protest via Facebook, they said they aimed to meet Piazza Maggiore's stated maximum capacity of 6,000

But the protesters were packed in even more tightly than they'd imagined. Between 12 and 15 thousand people turned up on Thursday night, despite the pouring rain, filling the main square and the surrounding streets.

Salvini's own rally in the city meanwhile attracted a crowd of 3,000.

There were similar scenes in the nearby city of Modena on Monday night. Some 7,000 protesters gathered at Modena's Piazza Grande as Salvini, a prolific social media user who often claims his supporters fill squares wherever he goes, arrived to campaign for regional elections in the city.

Thousands of Italians singing the revolutionary song “Bella Ciao” in #Modena, in protest against the policy of hatred and racism against refugees and migrants in #Italy.

Salvini, whose populist right-wing League party was until August part of a coalition government, is known for his policy of closing Italian ports to rescue ships saving migrants at sea, as well as for his “Italians first” rhetoric, stirring up feelings of insecurity and euroscepticism in the country.

People joining the protest in Bologna said they had wanted to show that “hatred is not the only thing that can fill a square in Italy”.

21-year-old Ana, a student at Bologna's university who attended the first protest, told The Local: “People go to his rallies just for the novelty of seeing this guy who's on their TV screen every night, or to get a selfie.”

“He probably likes that we're protesting against him, because he's an attention-seeker,” she said. “But in reality, he's not important. It's the idea we reject, the hatred and division pushed by some politicians, and that is nothing new.”

“We've had enough of the hate.”

Salvini said his party would “free” the region of Emilia-Romagna, which has long been a left-wing political stronghold, from the left.

In other regional elections this year, the trend so far has been for historically left-voting regions to swing to the right.

But the region of Emilia-Romagna, and particularly Bologna, often nicknamed la rossa, or “the red”, because of long prevailing left-wing political views, is not expected to be easy for the League and its right-wing allies to win over.

Italy turning blue as the centre-right/League coalition takes region after region from the left in local elections over past 2 years. https://t.co/Au6yLCZkso

Salvini, along with Italy's right-wing newspapers, quickly dismissed the sardines as being affiliated with Italy's left-wing political parties.

While some of the protesters on social media are open about having left-wing political leanings, they insist the movement is made up of people with differing views, as one Facebook commenter put it, “united by their disgust at Salvini.”

Sardines supporter Giovanna Grillandi, in Ravenna, described it as “a non-partisan initiative.”

“They are only people who want to express their thoughts,” Grillandi told local newspaper Ravenna Today. “Taking to the streets at this time, against the desire of some political party to take us backwards, is very important,”

61-year-old Grillandi has been crocheting sardines for protesters ahead of a planned flash mob protest in the city.

“I wanted to make my contribution, because I don't know if I'll be able to participate in the event by going down to the square. I'm pleased to give them to people in my area,” she said of her creations.

This isn't the first time there have been widespread protests against Salvini and his politics in Italy.

In May this year, there was a wave of anti-Salvini protests in cities he visited on a previous regional election campaign tour, while he was still Italy's interior minister and co-deputy prime minister.

Those protests, which were sparked when Salvini reportedly ordered police and firefighters to remove protest banners telling him “you're not welcome”, were smaller, and seemingly not part of a coordinated movement.

The next protests are planned for Friday in Palermo,  on Saturday in Reggio Emilia and Perugia, and on Sunday in Rimini.

A Facebook group for those organising a protest in Ravenna has attracted some 8,000 likes within 24 hours after it was created on Tuesday morning, despite it not yet being known if Salvini will definitely visit the city or not.

Deputy Prime Minister Salvini, whose far-right League party is a key member of Meloni’s coalition, is suing the journalist for calling him the “minister of the criminal underworld” in a social media post in 2018.

In November, Saviano went on trial in a case brought by Meloni for calling her a “bastard” in 2020 over her attitude towards vulnerable migrants.

Meloni’s far-right Brothers of Italy party was in opposition at the time, but won September elections on a promise to curb mass migration.

Saviano, known for his international mafia bestseller “Gomorrah”, regularly clashes with Italy’s far-right and says the trials are an attempt to intimidate him.

He faces up to three years in prison if convicted in either trial.

“I think it is the only case in Western democracies where the executive asks the judiciary to lay down the boundaries within which it is possible to criticise it,” Saviano said in a declaration in court on Wednesday.

He said he was “blatantly the victim of intimidation by lawsuit”, on trial “for making my opinion, my thoughts, public”.

Press freedom watchdogs and supporters of Saviano have called for the suits to be scrapped. Meloni refused in November, despite criticism that her position of power makes it an unfair trial.

Saviano has lived under police protection since revealing the secrets of the Naples mafia in 2006.

But when Salvini was appointed interior minister in a previous government in June 2018, he suggested he might scrap Saviano’s armed guard.

The writer reacted on Facebook, saying Salvini “can be defined ‘the minister of the criminal underworld’,” an expression he said was coined by anti-fascist politician Gaetano Salvemini to describe a political system which exploited voters in Italy’s poorer South.

He accused Salvini of having profited from votes in Calabria to get elected senator, while failing to denounce the region’s powerful ‘Ndrangheta mafia and focusing instead on seasonal migrants.

Salvini’s team are expected to reject any claim he is soft on the mafia.

Saviano’s lawyer said he will call as a witness the current interior minister Matteo Piantedosi, who at the time was in charge of evaluating the journalist’s police protection.

The next hearing was set for June 1st.

Watchdogs have warned of the widespread use in Italy of SLAPPS, lawsuits aimed at silencing journalists or whistleblowers.

Defamation through the media can be punished in Italy with prison sentences from six months to three years, but the country’s highest court has urged lawmakers to rewrite the law, saying jail time for such cases was unconstitutional.

Saviano is also being sued by Culture Minister Gennaro Sangiuliano in a civil defamation case brought in 2020, before Sangiuliano joined the cabinet.

A ruling in that case could come in the autumn. If he loses that case Saviano may have to pay up to 50,000 euros in compensation, his lawyer told AFP.

Italy ranked 58th in the 2022 world press freedom index published by Reporters Without Borders, one of the lowest positions in western Europe.