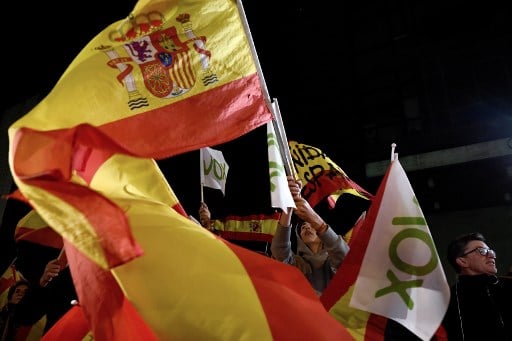 In a country once considered impervious to far-right politics due to its dictatorial history, far-right populists Vox won 15 percent of the vote in Spain’s recent elections, making it the third largest party in Parliament.

The election results (above) show Murcia was the only region in Spain where Vox won the largest share of the vote.

Vox has faced criticism for reactionary positions on immigration, abortion, gun control and Islam, but it cannot be reasonably suggested that Murcians suddenly, and collectively, veered to the far-right; so what made Murcians vote Vox?

Lourdes Mendez, deputy for Vox Murcia, claimed the result has “proven that Murcia is not happy with the politicians who are representing them in the region”.

Murcia has long been a bulwark for conservative politics; the rise of Vox, therefore, is not symptomatic of an expansion of the rightwing vote but, rather, evidence of traditionally conservative voters becoming disenchanted with mainstream politics and voting Vox instead.

It is important, therefore, not to blindly brand Murcia as a far-right region, but instead to view Vox’s success in the region as a protest vote.

One voter described this as “a vote of punishment” aimed towards mainstream parties incapable of forming a coalition government. This growing frustration with the political process was, for many Murcians, best verbalised by Vox leader Santiago Abascal in the televised leaders’ debates, something he wasn’t part of in the previous April election campaign.

This is not to say, however, that Vox’s populist rhetoric does not incorporate issues germane for many Murcians.

Vox’s commitment to curb illegal immigration – many migrants travel to Murcia to work in low-paid agricultural work – resonates in a region that has suffered widespread levels of unemployment since the financial crisis.

Unfortunately, here Vox’s provocative views on Islam conveniently conform with their immigration policies, as the South-Eastern region receives a lot of migration, both legal and illegal, from North Africa. It is no coincidence that Vox portrays itself as the defender of traditional Spanish Catholic values.

Similarly, many Murcians felt that Vox’s commitment to centralisation, particularly its public denouncement of the Catalonian independence movement, would better allow for equality amongst all Spanish regions.Vox’s initial electoral surge began in 2018 amidst a botched independence bid that caused outrage across Spain.

Francisco López Carvajal, from the College of Political Science of the Region of Murcia, emphasised this correlation between Catalonia and Vox voters: “Spain is broken by Catalonia and throwing [away] national pride… in a region like Murcia… one of the most identified with the feeling of Spanishness”.

This pride in Spanish national identity, something Vox portrays itself as a defender of, is offended by separatism.

The Catalonian issue also highlights a disparity in media and government focus between North and South, between Catalonia and the rest of Spain, and between Murcia and the more affluent regions of the country.

Many Murcians feel that the media focus is on disruptive secessionists and not on their region, somewhere they feel has many more important issues. Another that could partly explain the collapse of the PP vote in Murcia, to the benefit of Vox, is the sullying of its reputation following the environmental disaster at Mar Menor.

Strong Vox results in Cartagena, Torre Pacheco and San Javier, three municipalities directly affected by the crisis, pay testament to this. Curiously, this provides no evidence for Vox’s green politics as they did not participate in the recent protests in Murcia and Cartagena; rather, it illustrates the severity of the discontent felt towards PP and other mainstream parties. Vox, offering populist policies to a disenfranchised region, capitalised on this representative vacuum.

The plan would curb some harmful agricultural practices blamed for pushing the lagoon in southeastern Spain to what ecologists have described as “the brink of ecological collapse”.

“The environmental crisis of the Mar Menor is unsustainable, the damage must be stopped immediately,” Environment Minister Teresa Ribera said as she unveiled the 382-million-euro ($440-million) investment plan on a visit to the area.

In August, millions of dead fish and crustaceans began washing up on the lagoon’s shores, scenes that experts have repeatedly blamed on agricultural pollution.

They say the sea creatures died due to a lack of oxygen caused by hundreds of tonnes of fertiliser nitrates leaking into the water, triggering a phenomenon called eutrophication which collapses aquatic ecosystems.

The ministry’s plan for 2022-26 includes short- and medium-term steps to slash the contaminants entering the lagoon, ending illegal irrigation practices and revitalising the Mar Menor’s shoreline.

It outlines several environmental regeneration projects to support biodiversity in and around the lagoon, including the creation of a 1.5-kilometre (one mile) buffer zone along the Mar Menor’s shores.

The plan involves cracking down on illegal irrigation and cutting off supplies to farms without irrigation rights, reviewing permits for wastewater disposal and monitoring livestock farms.

Earlier this month, ecologists submitted a formal complaint to the EU over Spain’s “continued failure” to protect the Mar Menor, urging the European Commission to take “immediate action”.

Although the lagoon is protected under various EU directives and the UN environment programme, they said Spain has failed to comply with its legal obligations, taking “only superficial steps” to safeguard the Mar Menor from damaging agricultural practices.