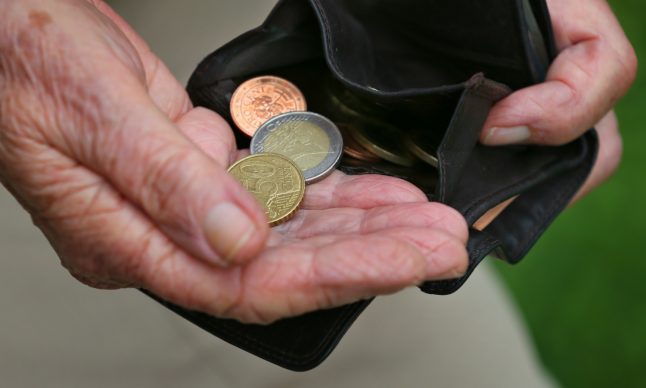 After difficult talks, Merkel's conservative Christian Democrats (CDU) and its Bavarian partner the CSU agreed with the centre-left Social Democrats (SPD) on a deal on topping up the basic pension for low-income recipients who have worked all their lives.

Markus Söder, leader of the CSU in Bavaria, hailed the deal saying “there is no longer any reason to question the continuation of the coalition government”.

READ ALSO: How to maximize your German pension even if you retire elsewhere

On Twitter Söder added that the 'grand coalition' or GroKo had taken a “big step towards the future”.

“We have found a good and defendable solution for the CDU on this difficult subject,” CDU president Annegret Kramp-Karrenbauer told a joint news conference with the CSU and SPD leaders.

The two camps in the ruling coalition have been at loggerheads over the pensions issue in a country confronted by an ageing population.

A major political crisis had loomed among the government partners who also face internal party problems.

READ ALSO: From climate action to 'Soli tax': What you need to know about Germany's planned changes

What is the 'basic pension' (Grundrente)?

The basic pension is a supplement or top-up to the pension entitlements of low-income earners who have clocked up 35 years of contribution through work, child-raising or caring for relatives. It is intended to help those who currently receive a small pension.

The parties have agreed on implementing a “comprehensive income test” so that the new system really helps people in need – a previous sticking point for the coalition.

It will be introduced on January 1st 2021 and applies to those who have already retired and future pensioners.

The basic pension should reach between 1.2 and 1.5 million people. According to the SPD's Dreyer, women in particular will benefit.

Söder said the cost of the basic pension is likely to be between one and 1.5 billion euros.

READ ALSO: How does Germany's pension system measure up worldwide The CSU's Markus Söder, the CDU's Annegret Kramp-Karrenbauer and the SPD's Malu Dreyer after they reached a deal on Sunday. Photo: DPA

Germany on Saturday marked 30 years since the fall of the Berlin Wall that ushered in the end of communism and national reunification.

But a new political chasm is opening up in Germany with the far-right gaining a strong foothold in the former communist states.

READ ALSO: What does the far-right AfD's success in Thuringia mean for Germany?

This was just one example of the squeeze being put on the traditional parties in or near the political centre.

The junior coalition partners, the centre-left SPD, are fighting for political survival and are expected to decide next month whether to remain in the government or change direction and trigger early elections.

On Sunday at least there was agreement in the coalition that the award of the new topped-up pension would be means-tested, a point  demanded by the CDU.

Since the coalition came into being in March 2018, Merkel has appeared less politically solid and observers have begun questioning her ability to lead after 14 years in office.

The 65-year-old has already said this will be her last term, due to end in the autumn of 2021.