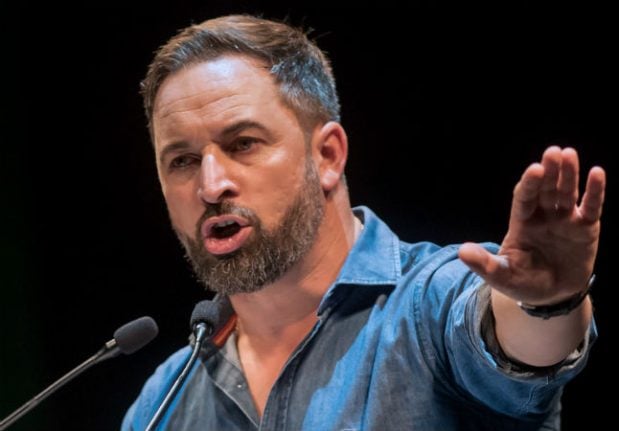 Santiago Abascal has skilfully used the Catalan crisis to boost his party's position. Photo: Ander Gillenea/AFP
Sporting an impeccably-trimmed beard and with a piercing stare, Abascal has become the poster boy for the resurgent far right which in the past year has made significant political inroads following decades on the margins after the death of dictator Francisco Franco.
Launched in 2014 by Abascal and a handful of others from the hardline fringe of the rightwing Popular Party, Vox struggled to gain traction at first, attracting only a smattering of voters with its ultra-conservative stance on immigration, gender violence and traditional family values.
A media-savvy operator who comes across as courteous and affable while deftly parrying difficult questions, it is Abascal's tough line on the Catalan separatist crisis and his impassioned defence of Spain's unity that has drawn growing support.
In April, the party made its parliamentary debut after a general election in which it won 24 of the assembly's 350 seats. Polls show it could double it that number in Sunday's repeat general election, becoming the third largest party in parliament.
“I'm not a xenophobe,” said Abascal, smiling and joking as he appeared on a popular Spanish talk show that was watched by 4.7 million viewers in which he called for the expulsion of unaccompanied immigrant minors. “I'm an open and tolerant person.”
'Not a charismatic leader'
Banning separatist parties, taking direct control of the semi-autonomous region of Catalonia to stop secession, repealing a law that fights gender violence, Abascal's ultra-conservative proposals have sparked outrage both online and off.
Whether railing against immigrants, Islam or the bias against men in Spain's gender violence laws, the tough-talking career politician has continued to pull in the crowds with often exaggerated or even false populist claims.
But it has been his uncompromising attack on the “criminal separatism” in Catalonia that led to a failed independence bid two years ago that has been the cornerstone of Abascal's success.
“If you look at polls, he's very popular amongst his voters… but it's not his charisma that is driving voters,” said Ignacio Jurado, a politics expert at Madrid's Carlos III University. “What has made the party successful is the crisis with Catalonia and the fact that the mainstream parties were unable to address it.”
ETA and the Smith & Wesson
Born on April 14, 1976 in the northern port city of Bilbao, Abascal was raised in Amurrio, a village where his grandfather served as mayor during the Franco years.
Growing up in a region where politicians from both the left and the right were regularly targeted by the ETA separatist movement, Abascal said his father, a local PP councillor, was also in the firing line and escaped three attempts on his life.
But it didn't put off the young Abascal, who joined the party as soon as he turned 18 although he was forced to go everywhere with two bodyguards at his side.
“His political experience in the Basque Country, years of threats, must have influenced his ideas,” says Beatriz Acha, a political scientist at the Public University of Navarra.
Today, he openly acknowledges owning a Smith & Wesson firearm, which is rare in a country where the law severely restricts gun ownership — a law he plans to relax.
Married to a stylish Instagram influencer called Lidia Bedman, who in recent months has been much more in the public eye, Abascal has four children, two from a previous marriage.
Party rallies often feature footage of him scaling mountains or striding manfully through forests and fields.
Last year, another controversial video emerged of him riding a horse, cowboy-style, through Spain's arid south, entitled
“The Reconquista begins in Andalusia” — a reference to a series of centuries-long wars to recapture territory from the Muslims who occupied most of the Iberian Peninsula in the early 8th century.

From wild claims about CO2-emitting cats and dogs to George Soros photo collages, 40-year-old Annalena Baerbock has been the subject of a dizzying array of fake news, conspiracy theories and online attacks since she was announced as the Greens’ chancellor candidate in mid-April.

The latest polls have the Greens either ahead of or level with Merkel’s ruling conservatives, as the once fringe party further establishes itself as a leading electoral force in Europe’s biggest economy.

Baerbock herself also consistently polls higher than her conservative and centre-left rivals in the race to succeed Merkel, who will leave office after 16 years this autumn.

Yet her popularity has also brought about unwanted attention and a glut of fake news stories aimed at discrediting Baerbock as she bids to become Germany’s first Green chancellor.

Among the false stories circulating about Baerbock is the bizarre claim that she wants to ban household pets in order to reduce carbon dioxide emissions.

Another fake story firmly denied by the party claimed that she defied rules on mask-wearing and social-distancing by embracing colleagues upon her nomination earlier this month.

Baerbock has also been presented as a “model student” of Hungarian billionaire George Soros – a hate figure for the European far-right and anti-Semitic conspiracy theorists – in a mocked-up social media graphic shared among others by a far-right MP.

More serious online attacks include a purported photo of Baerbock which in fact shows a similar-looking naked model.

The Greens’ campaign manager Michael Kellner said that the attempts to discredit Baerbock had “taken on a new dimension”, that “women are targeted more heavily by online attacks than men, and that is also true of our candidate”.

Other false claims about the party include reports of a proposed ban on barbecues, as well as plans to disarm the police and enforce the teaching of the Quran in schools.

While such reports are patently absurd, they are potentially damaging to Baerbock and her party as they bid to spring a surprise victory in September.

“She has a very real chance, but the coming weeks are going to be very important because Baerbock’s public image is still taking shape,” Thorsten Faas, a political scientist at Berlin’s Free University told AFP.

In a bid to fight back against the flood of false information, the party has launched a new “online fire service” to report fake news stories.

Yet stemming the tide is no easy job, with many of those who peddle disinformation now using private messaging services such as WhatsApp and Telegram rather than public platforms such as Facebook.

The pandemic and ongoing restrictions on public life will also make it harder for the campaign to push through their own narratives at public events.

Miro Dittrich of Germany’s Amadeu-Antonio anti-racism foundation claims that lockdown has “played a role” in the spread of fake news.

“People are isolated from their social environment and are spending a lot more time online,” he said.

Another factor is Russia, which has made Germany a primary target of its efforts to spread disinformation in Europe.

According to the European anti-disinformation platform EUvsDisinfo, Germany has been the target of 700 Russian disinformation cases since 2015, compared to 300 aimed at France and 170 at Italy.

As an outspoken critic of the controversial Nord Stream 2 gas pipeline between Germany and Russia, Baerbock may well become a target of such attacks during the election campaign.

PARTNER CONTENT
Your vote matters: get your US election ballot in today