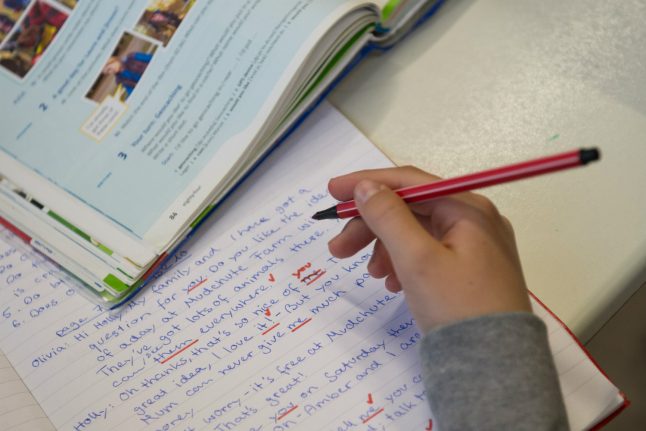 A pupil learning English at a German school. Photo: DPA

Meanwhile, the Bundesrepublik is ranked eighth in Europe, according to the report.

Germany scored a rating of 63.77, marking it out as a country with a “very high” level of English language skills. The top spot went to the Netherlands, which scored 70.27. It was followed by Sweden at number two, Norway, Denmark and Singapore. The average European score was 56.71.

At the bottom end of the scale (not pictured in the table below), Libya was in last place, just behind Kyrgyzstan, Saudi Arabia, Iraq and Ivory Coast.

READ ALSO: What you need to know about teaching English in Germany According to the report, countries with the highest English proficiency in Europe “are clustered in Scandinavia, but the number of very high proficiency countries across the region has grown every year since 2017”.

The researchers said that the key to improved English language skills is an “early focus on communication skills, daily exposure to English both in and outside the classroom, and career-specific language instruction in the final years of study”.

The report said out of the Eurozone’s four largest economies, “only Germany speaks English well”.

“France, Spain, and Italy lag behind nearly every other member state – a finding that has been consistent across previous editions of the EF EPI,” said the report's authors.

Overall Germany was placed in the proficiency band “very high”, meaning that the average German tested had an English standard equal to a B2 level in the Common European Framework of Reference.

A total of 13 other countries also had this proficiency band. The high category would be equal to a B1 level of language proficiency.

Where in Germany do people speak the best (and worst) English?

The states home to Germany's big cities came out on top. The region ranked highest was Berlin (with a score of 65.51), which isn't hugely surprising due to the large amount of English spoken in the capital, and its diverse population.

The regions that didn't fare so well (shown in green on the map below) were the eastern states of Mecklenburg-Western Pomerania, which received a rating of 58.72, and Saxony-Anhalt, with 60.70. Far-western Saarland (60.98) and northern Bremen (61.70) also had a lower rating. When it comes to cities, Düsseldorf in North-Rhine Westphalia scored highest, followed by Berlin and Munich. There's also a small difference when it comes to gender. German men apparently have a slightly more fluent turn of phrase in the English language than their female counterparts, scoring 64.36 on the index in comparison with 63.25 for women.