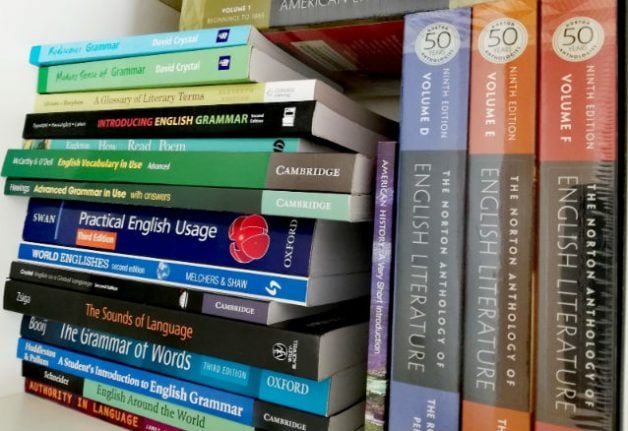 English textbooks for sale on the Norwegian auction site Finn.no. Photo: Finn.no
The newest edition of the annual English Proficiency Index (EPI) from global language training company Education First (EF) ranked Denmark fourth out of 100 countries that don't have English as a national language.
That’s a gain of one spot since last year, putting it just behind it neighbours Norway and Sweden, who took third and second place respectively.
“We're happy to see that we have actually risen one place up in the rankings, so that's positive,” said Rico Karstensen, managing director of EF in Denmark.
“But what is also striking is that a lot of other countries are also improving significantly, and from our perspective that is likely to continue and it might make it more difficult for Danes to compete.”
This year’s index was topped by The Netherlands, which ousted Sweden from the top spot.
READ ALSO:
But as English-speaking residents of Denmark will know, Danes generally have little difficulty conversing or doing business in English. As recently as 2014, the index declared Danes the world’s best non-native English speakers in the world.
They are one of only 14 countries whose proficiency is rated “very high” by the study. Of those, all but two are in Europe, and in the two countries which aren't, Singapore and South Africa, English is often the first language anyway.
But the index found that English proficiency was improving among former laggards both inside and beyond Europe.
Karstensen said that in the long run that might make it more difficult for Danes to win places at employers and universities internationally.
“We need to push ourselves so our English level keeps being ahead of the competitors,” he said. “And we don't see that. We haven't made significant advances and in the last couple of years we plateaued a bit.”
'Very high' proficiency was defined by EF as the ability to carry out complex, nuanced tasks in English, such as negotiating a contract with a native English-speaker, reading advanced texts with ease, and using nuanced and appropriate language in social situations.
Denmark has never been ranked outside the top five in the nine years the survey has been published.
The Nordic countries still feature heavily in the list of the best English speakers, with Denmark this year taking fourth place and Finland seventh, but the report said that other countries in Europe were catching up.
“The countries with the highest English proficiency in Europe are clustered in Scandinavia, but the number of very high proficiency countries across the region has grown every year since 2017,” the report's authors wrote.
The report is based on a comparison of English skills measured by testing 2.3 million people, who voluntarily applied to take the test, in 100 countries. The full EPI report can be read here.