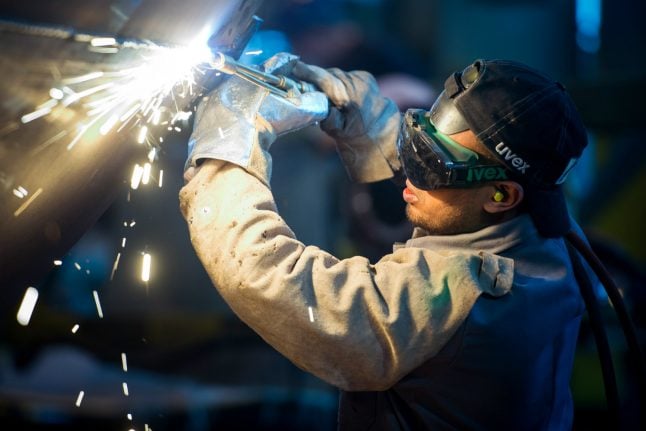 Germany is struggling to attract skilled workers like this one in in Fürstenwalde, Brandenburg. Photo: DPA

By 2040, about 35 percent of Germany's population will have a migrant background or be a migrant themselves, according to Herbert Brücker, who is in charge of the migration research department at the Federal Institute for Employment Research (IAB).

He said in large cities the proportion of migrants will climb to 70 percent.

Brücker said currently in Frankfurt “every second person there already has a migration background”.

“In Berlin the figure is about 35 percent,” he said.  “What we see in the big cities today will be normal for the country as a whole in the future. And in a city like Frankfurt, we'll have between 65 and 70 percent immigrants.”

READ ALSO: One in every four German residents now has migrant background

Brücker, who is also director of the Berlin Institute for Empirical Integration and Migration Research (BIM) at Humboldt University, said that it is would be wrong to assume that a “minority” of Germans will in future face a “majority” of immigrants.

The Germans will always remain by far the largest group in the country, he said.

However, Germany will face a further shortage of skilled workers and will need to think of ways of luring people from other countries.

As The Local has reported, Germany is introducing a new law which is set to ease immigration rules in a bid to attract foreign job seekers to fill vacancies.

According to IAB calculations, Germany will need 400,000 migrants per year up until 2060, so that the working population can remain steady.

“We are in competition with other countries when it comes to migration – both among the highly qualified and among the less qualified,” said Brücker.

According to the latest statistics for 2018, about a quarter of the people in Germany – one in four – have a migration background.

In 2018, approximately 20.8 million people in Germany had a migrant background. The Federal Statistical Office (Destatis) said this was a 2.5 percent increase compared with a year earlier when the figure was 20.3 million.

PARTNER CONTENT
‘Be more humble’: Top tips on how to ace your Swedish digital job interview
Url copied to clipboard!