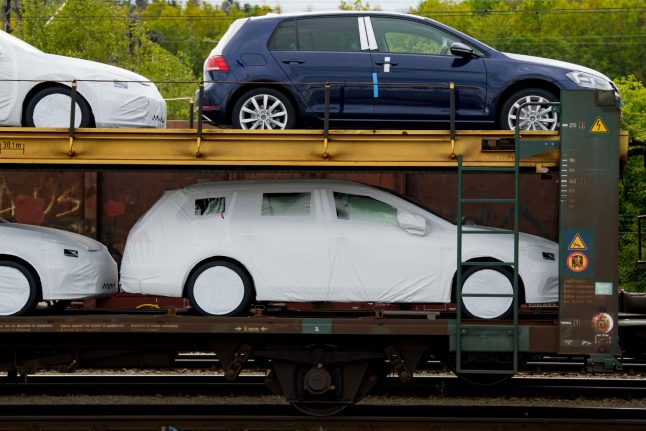 VW Golf at a factory in Zwickau

The eighth generation of the unglamourous but trusted compact car, of which more than 35 million units have been sold since 1974, will make its debut during an evening ceremony at the group's Wolfsburg headquarters.

But it will be a decidedly less glitzy affair than last month's unveiling of the ID.3 — VW's first all-electric, mass-market car which took centre stage at the Frankfurt auto show and symbolizes the group's 30-billion-euro bet on zero-emissions vehicles.

Seven years after the model's last revamp, the new Golf 8 is hitting the road in a vastly changed landscape.

Volkswagen has been rocked to the core by a costly diesel emissions cheating scandal that is still reverberating across the industry, and has forced carmakers to adapt to tough new EU pollution regulations.

While the “dieselgate” fallout has sped up the industry's pivot towards electric and increasingly automated cars, the huge investments required for the switch are being hamstrung by trade conflicts and a global economic slowdown.

In the face of these challenges, it's clear that the new Golf — easily the group's most recognizable car after the legendary Beetle — is being rolled out “to make money”, said industry expert Stefan Bratzel of the Center of Automotive Management.

The crowd-pleaser will be available in diesel, petrol and hybrid — and could well be the group's last hurrah in the fossil fuel era.

“It will bridge the gap between the new era and hanging on to old customers,” said industry expert Ferdinand Dudenhöffer.

VW's CEO Herbert Diess is betting big on next-generation vehicles, promising to bring some 70 electric models to market by 2028.

But before the greener, smarter cars go mainstream, “it would be stupid” to pass up the hundreds of thousands of new unit sales that a revamped Golf would ring up, said Dudenhöffer.

The ID.3 won't be able to quickly rival that kind of market share, said Bratzel. “The Golf will be needed to bring in volume sales for several more years,” he said. The new ID.3 being unveiled in September. Photo: DPA

By reusing the platform the previous Golf was built on, the group was able to slash production costs, saving hundreds of millions of euros, VW production chief Andreas Tostmann said.

Overall, VW has poured nearly two billion euros in the Golf 8 and says it has brought the model into the digital age with online technologies and smart driving assistance systems.

But software glitches forced the company to forego for now the installation of some planned on-board functionalities in order to stick to the scheduled production start earlier this year.

“The Golf is also a symbol of the Volkswagen group's struggles to transition to a new world,” said Bratzel.

Volkswagen deliberately chose not to offer a fully electric version of the Golf 8 so as not to overshadow the similarly sized ID.3.

The new Golf therefore marks the group's last major launch of a classic internal combustion engine car for the next two and a half years, a source close to the company told AFP.

Selling drivers on the latest Golf may prove harder than in the past, because customers will need convincing that they are not just “buying a car of the past”, said Bratzel.

The evergreen four-wheeler also faces increased competition from SUVs, which are expected to account for around half of VW's own-brand car sales by 2025.

While still important, the new Golf “is no longer vital” to Volkswagen's strategy, said Dudenhoeffer.

“Like the Beetle before it, the era of the Golf will end at some point.”