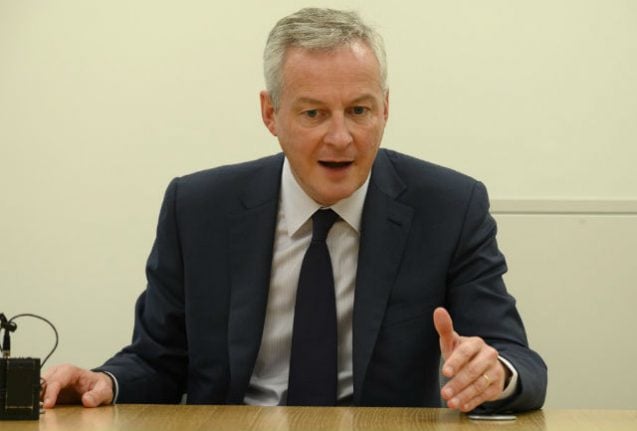 French Economy Minister Bruno Le Maire speaks to reporters at the IMF meeting in New York on Friday. Photo: Andrew Caballero-Reynolds/AFP
“This is a hostile act between allies. These hostile acts are unwelcome,” Le Maire told reporters on the sidelines of the annual meetings of the World Bank and International Monetary Fund.
“This is especially the case because we are working in good faith toward a negotiated solution,” he added.
Washington on Friday slapped tariffs on European goods after an arbitration ruling by the World Trade Organization found European aircraft manufacturer Airbus had received improper state subsidies.
But Le Maire said both sides should jointly develop common compliance standards.”That's the right answer,” he said.
Le Maire also denounced new US tariffs on French wine. “On what grounds are French winemakers hit by these tariffs? No one can understand,” he said.
“Hitting these winemakers… is profoundly unfair and incomprehensible from our American ally,” said Le Maire, who was due to meet with US Trade Representative Robert Lighthizer later on Friday.
Still, he said he doubted the Americans would suspend the tariffs at his request. “I'm realistic,” he said.
After 25 percent tariffs took effect, French winemakers demanded speedy economic aid from Paris and called on the European Commission to begin talks with Washington.
Washington's tariffs on $7.5 billion in European exports took effect at 0401 GMT on Friday. EU authorities could soon be permitted to retaliate, having lodged their own complaint at the WTO against US subsidies for Airbus rival Boeing. 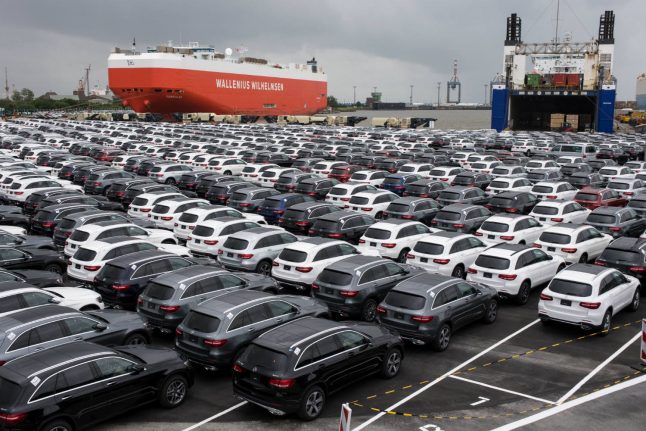 Cars in Bremen in northern Germany ready to be exported. Photo: DPA

“This expression or threat, as you will, does exist,” Annegret Kramp-Karrenbauer told a news conference during a visit to London after a report in the Washington Post newspaper.

READ ALSO: Why Germany is vulnerable to US President Trump's car tariffs

The US daily said that Trump made the threat if Britain, France and Germany did not formally accuse Tehran of flouting the 2015 nuclear deal.

Tehran responded by restarting aspects of its nuclear programme that the deal had sought to limit.

London, Paris and Berlin on Tuesday announced they had triggered a dispute mechanism under the agreement in an effort to force Tehran to abide once more by its terms.

But Iran's Foreign Minister Mohammad Javad Zarif accused the trio on
Twitter of having “sold out remnants of #JCPOA (the nuclear deal) to avoid new Trump tariffs”.