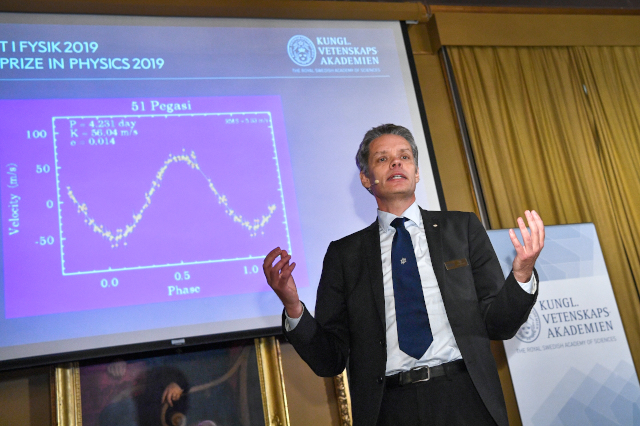 That's it from me. Thanks for reading, do consider joining us as a Member of The Local if you're not already part of our community, and please follow us again tomorrow for the Nobel Prize in Chemistry.

You can read more about this year's Physics award here. The announcement of the 2019 Nobel Prize in Physics. Photo: Claudio Bresciani/TT

12:15 An answer to the eternal question?

Mayor and Queloz will share half of this year's prize. Their work helped us understand the neighbourhood outside our own solar system, and may lead to the answer to the question about whether or not there is other life out there somewhere in space. Here's what the Nobel Foundation's press release says:

“In October 1995, Michel Mayor and Didier Queloz announced the first discovery of a planet outside our solar system, an exoplanet, orbiting a solar-type star in our home galaxy, the Milky Way. At the Haute-Provence Observatory in southern France, using custom-made instruments, they were able to see planet 51 Pegasi b, a gaseous ball comparable with the solar system's biggest gas giant, Jupiter.”
“This discovery started a revolution in astronomy and over 4,000 exoplanets have since been found in the Milky Way. Strange new worlds are still being discovered, with an incredible wealth of sizes, forms and orbits. They challenge our preconceived ideas about planetary systems and are forcing scientists to revise their theories of the physical processes behind the origins of planets. With numerous projects planned to start searching for exoplanets, we may eventually find an answer to the eternal question of whether other life is out there.”
“This year's Laureates have transformed our ideas about the cosmos. While James Peebles' theoretical discoveries contributed to our understanding of how the universe evolved after the Big Bang, Michel Mayor and Didier Queloz explored our cosmic neighbourhoods on the hunt for unknown planets. Their discoveries have forever changed our conceptions of the world.”

12:06 Music and mythology, Einstein and astrology…

So, James Peebles, born in Canada but currently living in the US, is awarded the 2019 Nobel Prize in Physics “for theoretical discoveries in physical cosmology” and Switzerland's Michel Mayor and Didier Queloz “for the discovery of an exoplanet orbiting a solar-type star”.

In short, we're talking about the most famous moments in the history of our universe: The Big Bang.

Here's what the Nobel Foundation says about Peebles:

His “insights into physical cosmology have enriched the entire field of research and laid a foundation for the transformation of cosmology over the last fifty years, from speculation to science. His theoretical framework, developed since the mid-1960s, is the basis of our contemporary ideas about the universe.”
“The Big Bang model describes the universe from its very first moments, almost 14 billion years ago, when it was extremely hot and dense. Since then, the universe has been expanding, becoming larger and colder. Barely 400,000 years after the Big Bang, the universe became transparent and light rays were able to travel through space. Even today, this ancient radiation is all around us and, coded into it, many of the universe's secrets are hiding. Using his theoretical tools and calculations, James Peebles was able to interpret these traces from the infancy of the universe and discover new physical processes.”
“The results showed us a universe in which just five percent of its content is known, the matter which constitutes stars, planets, trees – and us. The rest, 95 percent, is unknown dark matter and dark energy. This is a mystery and a challenge to modern physics.”

Ulf Danielsson of the #NobelPrize committee starts his explanation of this year's Physics prize “Our whole universe was in a hot, dense state. Then nearly 14 billion years ago expansion started.” Not sure how many in the audience got it… pic.twitter.com/fiBEJq2FYp

… James Peebles, with the other half to Michel Mayor and Didier Queloz “for contributions to our understanding of the evolution of the universe and Earth's place in the cosmos.”

Lawrence Bragg, who shared the Physics Prize with his father in 1915, is the youngest Nobel Physics laureate ever. He was 25, so I guess that's another item I can tick off my list of roads not taken.

Then again, last year's Physics laureate, Arthur Ashkin, 96, is the oldest ever, so I guess there's still time.

It's notoriously hard to predict, but a few names are being kicked around.

Swedish newspaper DN reports that the Physics Prize could go to quantum physics research, citing US scientist John Clauser, Alain Aspect of France, and Austria's Anton Zeilinger. Or, Ronald Hanson of the Netherlands could win for his work on quantum entanglement, according to Swedish radio broadcaster SR.

We've just been told that the press conference is running late, so it will start at 11.50 rather than 11.45. In punctual Swedish terms that is a significant delay and I shall be complaining to the relevant authorities.

11:25 What's going on with the Swedish royal family?

Despite all the Nobel news, THIS is in fact the most popular story in Sweden today.

Make of that what you will.

Three women have been awarded the Physics Prize to date: Marie Curie in 1903, Maria Goeppert-Mayer in 1963 and Donna Strickland in 2018. But how many prizes have been handed out in total, you ask. 112 since 1901, so the gender balance is, well, not particularly. And one of the laureates, John Bardeen, won it twice.

The gender inequality has previously made headlines, and Göran K Hansson, the Secretary-General of the Royal Swedish Academy of Sciences, which is responsible for the Physics, Chemistry and Economics prizes, has said he would like to see more women laureates, but that they have to make their decision based on the nominations they receive – and apparently not enough female physicists get nominated.

Here's how the nomination process works:

Thousands of members from the world of academia, science, parliamentary assemblies and previous Nobel laureates – chosen to represent as many countries and universities as possible over the course of time – submit candidates for the Nobel Prizes. The Nobel Committees of the awarding institutions then select the winners after much deliberation. The names of the other nominees cannot be revealed to the public until 50 years later and in case you were wondering, no you may not nominate yourself for a Nobel Prize.

If your phone rings, pick up! It might be Secretary General, Göran K. Hansson, trying to reach you with some important news. #Physics #NobelPrize pic.twitter.com/M72GCZqZVX

Good morning from the Royal Swedish Academy of Sciences, where this year's winner or winners of the Nobel Prize in Physics will be revealed at 11.45am.

The winners themselves usually get told just a few minutes before the rest of us. However, it can be difficult to reach them due to the time differences (they're often based in the US), so sometimes they only find out when they wake up and turn on the morning news.

And in 1989, the Nobel Committee accidentally called the wrong Norman Ramsey to inform an unsuspecting man (who was in fact an economist) he had won the Nobel Prize in Physics.

I give the #fika at the Royal Swedish Academy of Sciences 7/10. Do we get to keep the mugs @vetenskapsakad? pic.twitter.com/w7I9f3iUGB