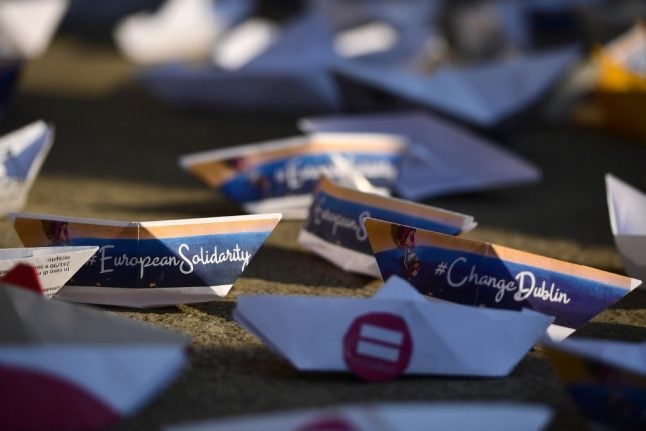 A 2018 protest in Milan calling on the EU to revise its migrant distribution rules. Photo: Miguel Medina/AFP

The deal to determine which countries will welcome migrants rescued in the central Mediterranean hopes to end the long, drawn-out negotiations that have seen vulnerable asylum seekers – including babies – stranded at sea, sometimes for weeks.

“There is an agreement… that will be presented to the Council of Ministers of home affairs on October 8th” in Luxembourg, Maltese Interior Minister Michael Farrugia told journalists after talks with his French, German and Italian counterparts.

“No country should be left alone under stress,” Farrugia said of efforts to create an automatic distribution scheme until the current system, the 'Dublin regulation', can be revised. Critics have long argued that the regulation places an unfair burden on the Mediterranean frontier countries Italy, Malta, Greece and Spain.

Italy's new, pro-EU government has moved quickly to turn the page on the hardline anti-migrant policies pursued by former interior minister Matteo Salvini, who closed the ports to those rescued. A successful European migrant agreement would be a blow to Salvini, showing that cooperation gets better results than confrontation.

French Interior Minister Christophe Castaner said that details of the plan would not immediately be made public. “The document won't be released immediately… because we prefer to share it with other member states first,” Castaner told AFP.

After a meeting last week, Italian Prime Minister Giuseppe Conte and French President Emmanuel Macron both called for a reform of Europe's “ineffective” policy. Countries that did not volunteer to take migrants should face financial penalties, they argued.

“Europe has to be better prepared and stand with frontline countries like Italy, Greece, Malta, Spain and Cyprus,” European migration commissioner Dimitris Avramopoulos said as he arrived for the Malta talks.

Oxfam hailed the tentative agreement as “a positive first step to share responsibility between EU countries and the first moment of hope for a more humane system since European migration policies deteriorated in 2015.”

In a sign of how things have changed over the last few weeks, late on Sunday Italy authorised charity rescue vessel the Ocean Viking to disembark its 182 people rescued at sea in Messina, Sicily.

The decision “puts an end to five days of unnecessary suffering,” said charities SOS Mediterranee and Doctors without Borders (MSF) which operate the ship.

?BREAKING The competent Italian authorities have assigned #Messina as place of safety for the 182 survivors onboard the #OceanViking. We are relieved that for the second time in a week, Italy opens a port to people rescued in the Mediterranean. pic.twitter.com/rGk1ZmC79b

Monday's talks sought to try to decide where those rescued can be relocated — and whether that covers just those fleeing war and persecution, or economic migrants too.

France and Germany are reportedly willing to receive 25 percent of people plucked from the Mediterranean. But they are not keen on Italy's idea for migrants to be sent to countries across southern Europe on a rotation basis.

Italy could take 10 percent of new arrivals — a lower proportion because it has already hosted tens of thousands.

The number of migrants reaching Europe via the Mediterranean has dropped sharply in recent years. The UN's refugee body recorded nearly 115,000 arrivals in 2018, down from 170,000 in 2017 and over one million in 2015.

At an informal meeting of foreign and interior ministers in Paris in June, 15 countries agreed to set up a “European Solidarity Mechanism”. Croatia, Finland, France, Ireland, Germany, Lithuania, Luxembourg and Portugal said they would “actively” take part.

But Hungary's nationalist prime minister, Viktor Orban, rejected redistribution quotas in comments made during a visit to Rome on Saturday.