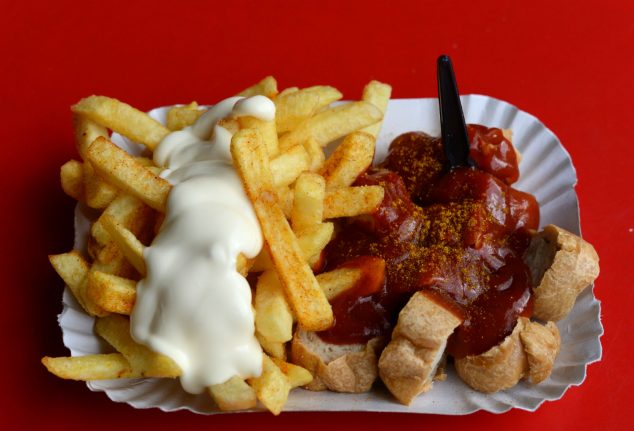 It has inspired a museum and a musical composition, and even caused a fight involving a Berlin Green party politician. Fans of the dish even have their own holiday: Day of the Currywurst on September 4th.

But is the currywurst – the fast food that says Berlin like no other – strictly German?

Evidence suggests that the spiced meal – a dish of sliced and grilled pork sausage with a sauce consisting of ketchup and curry powder – could not have been invented without the presence of British soldiers in Berlin after the Second World War.

Bianca Wohlfromm, project manager at the German Currywurst Museum Berlin, told The Local that currywurst “would not have been possible if the Allies were not in the city” and that the influence of the occupying powers was “large”.

According to the museum, the snack was first created on September 4th, 1949 in the Charlottenburg district of Berlin, on the junction of Kantstraße and Kaiser-Friedrich-Straße by the German woman Herta Heuwer.

At the time, the area was under the control of the British. In the post-war period, Allied soldiers were introducing new foods and eating habits to Germany, such as the Americans eating tomato ketchup with steak, which was adapted to eating sausage with ketchup. Curry powder was brought over by the British.

According to the Currywurst Museum, Frau Heuwer traded with British soldiers for the key ingredients of ketchup and curry powder.

She then combined the tomato sauce with the curry powder and served it with pork sausage. Exactly what she used in her sauce recipe remains secret to this day, and she patented her “Chillup Soße” in 1959.

Actually the British influence should not come as such a surprise, since curry, which makes up half of the name of the dish, is a British word. “Curry” is a misinterpretation of the Tamil “kari”, which refers to the sauce from the Indian subcontinent in which meat, fish or vegetables are cooked, according to the museum.

While in India, the British used the term “curry” to refer to the spice mixture used to prepare the sauce, and liked it so much that they brought spice mixes back to the UK, calling them curry powder.

Currywurst at the Currywurst Museum in Berlin. Photo: DPA

But there may be another side to the story.

The 1993 novel by Uwe Timm The Invention of Curried Sausage claims – though fictional – that the development of the currywurst took place in Hamburg.

According to Die Welt, Timm himself had eaten the currywurst in Hamburg as early as 1947, two years before Heuwer is said to have invented the sauce.

Though the Currywurst Museum acknowledges the novel, a slogan on the wall of museum reads the “real story begins in Berlin.”

Wohlfromm also notes that the story of Heuwer's invention of the snack to the best documented of the competing theories.

Though Wohlfromm calls currywurst a “German invention”, she also describes it as an “international product” and is happy for the dish to be served in the UK or USA, and for the influence of these countries on the dish to be noted.

“The places that serve it in the UK or USA tend to be people with German roots who have emigrated there,” she notes.

But does the influence of British soldiers, or Americans for that matter, warrant recognition on the commemorative plaque in Berlin's Stuttgarter Platz, which marks the spot of Heuwer's first shop?

“That is difficult,” says Wohlfromm.

“The plaque is more concerned with the person. Heuwer was a very successful business lady. She is remembered as a Berlin personality and entrepreneur. Acknowledging influence of other countries is difficult because so many things were invented at that time. Different things came over [to Germany]. I can't actually judge that.”

Could one say that the currywurst stands for international cooperation?

Wohlfromm says that the spiced snack is a symbol of a “creative situation, a difficult situation in which people had to be very creative. The currywurst stands for abundance of invention [and the] spirit of invention.”