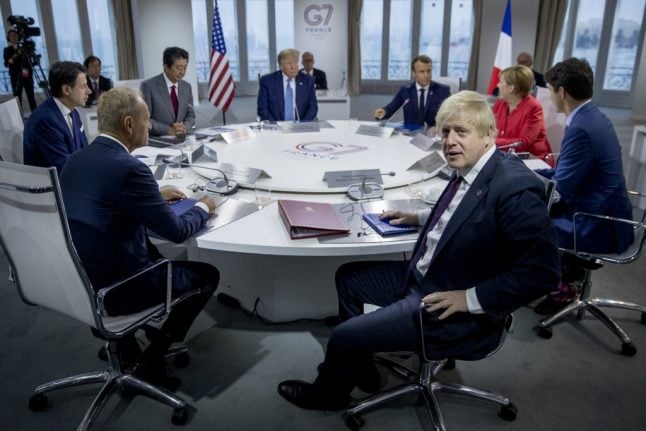 “I am marginally more optimistic,” he said after intense contacts on Brexit at the G7 with fellow leaders.

But he added: “It will be difficult… there is a substantial disagreement” between Britain and the EU.

Johnson insisted that it was up to the EU to improve the chances of a deal but needed to negotiate a new agreement on leaving without the so-called  “backstop” for Ireland.

The backstop provision, strongly opposed by Johnson's government and Brexit supporters, is meant to guarantee that border checks will not return between  Ireland, an EU member, and Britain's Northern Ireland.

The EU has so far rejected negotiating a new deal, which was approved by the government under Johnson's predecessor Theresa May but repeatedly rejected by the British parliament.

“All the statistical estimates I give for a deal… they all depend exclusively on the willingness of our friends and partners (in the EU) to compromise on that crucial point and get rid of the backstop and the current withdrawal agreement.”

Addressing concerns he is prepared to ignore parliament so that Britain leaves the EU on October 31st, Johnson said British people were tired of reading about Brexit on the front pages of their newspapers.

“I think that this is a matter for parliamentarians to get right themselves,” he said, adding that it was up to lawmakers to implement the outcome of the 2016 referendum that called for the EU exit.

“People have just about had enough of this conversation and they are yearning for a moment when Brexit comes off the front pages. But that can only happen when we come out of the EU on October 31st,” he said.

Johnson also reaffirmed that if Britain left the EU without a deal it would not pay all of the €43 billion divorce bill  that has already been negotiated.

He did not specify how much, if any, would be paid.

“Under any circumstances, if there is a no-deal outcome, very substantial sums will be available from the €43 billion for the UK to spend on our priorities, including managing that no-deal scenario,” he said.

The EU insists Britain must pay the bill even if it crashes out of the bloc without a deal.