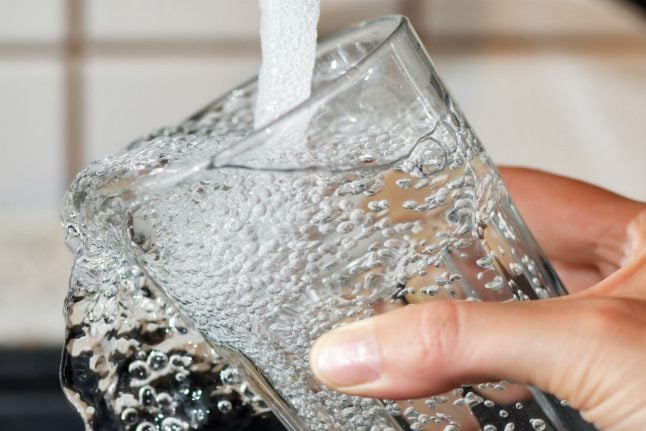 A woman in Sieversdorf, Brandenburg pours herself a glass of tap water. Photo: DPA

Federal Environment Minister Svenja Schulze is calling for more environmental and climate protection through turning to tap rather than bottled water.

“Drinking tap water saves money, energy and unnecessary packaging,” she said, adding that using drinking water fountains are a “healthy and environmentally friendly alternative to the many disposable water bottles that people carry around with them every day”.

She added that they make it more pleasant to spend time in cities, especially on hot days.

The problem is that there are not yet many public drinking fountains in Germany. Throughout the country, there remains a norm of buying bottled water or ordering it at cafes and restaurants. Asking for Leitungswasser (tap water) is often frowned upon.

In hopes of sparking a cultural shift, the ministry has formed a Verein (association) with a name in English: “A Tip: Tap”

Its prized project is “Wasserwende (water transformation): Drinking water is climate protection”, which Schulze's ministry is supporting with €1.3 million.

The aim is “to switch from bottled to drinking water from the tap in order to reduce CO2 emissions and plastic waste,” the Ministry of the Environment said in a statement.

But how? Project organizer Carmen Heilmaier explained that it is about informing people – at stands, in day-care centres and schools, and in companies. They are also setting up drinking fountains or “refill stations” in order to drink from the water dispenser directly or fill up a reusable bottle.

To put more fountains in place, the association is working together with local authorities, public utilities and other drinking water initiatives, such as those in Berlin-Moabit, in the Labertal valley near Munich, in Marburg, Karlsruhe, Neuruppin and in Chemnitz. Internally and via external experts, the Verein plans to check whether people are really switching from bottled water to tap water.

It is difficult to say how many greenhouse gases are actually produced by bottled water. A decade ago, Germany's Gut certification company determined that tap water and mineral water score roughly the same in terms of extraction and treatment.

However, transport routes and packaging made a huge difference. According to the study, “the typical mineral water sold in Berlin fluctuates between 60 and 425 grams of CO2 equivalents per litre” – whereas tap water only has an average of 0.35 grams.

Even under particularly favourable conditions, CO2 emissions per litre of bottled water would be 171 times higher.

The Federal Environment Agency (UBA) has no data on the CO2 balance of mineral and tap water, but the direction is clear: “If you don't buy bottled water, you save on your own transport routes and transport throughout Germany or Europe, often by truck,” said water expert Hans-Jürgen Grummt.

The quality of the tap water is so good that “there is no reason to buy bottled mineral water to quench thirst,” he says.

Do the Germans see it the same way?

In March, the water industry association BDEW reported that 83 percent of Germans drink tap water “regularly or occasionally,” with the average consumption per person per week estimated at nine litres. Yet only four percent of tap water Germans use is for drinking or in cooking, with the majority (36 percent) for bathing. A man uses a public drinking water station in Frankfurt to wash his hands. Photo: DPA

The Association of Municipal Enterprises (VKU), whose members say they supply more than 90 percent of Germans with water, emphasizes the “unbeatably attractive” price of around 0.2 cents per litre on average. For one euro, you receive an average of 500 liters of water, they said.

Yet many have safety concerns about nitrate in groundwater or old lead pipes.

The monitoring company Stiftung Warentest published an overview about drinking water in June. “Traces of the environment were found in almost all water, but they give no cause to worry about one's health,” their report stated.

UBA expert Grummt said that lead pipes in residential buildings were “a regional problem of older houses” which were no longer used after 1973.