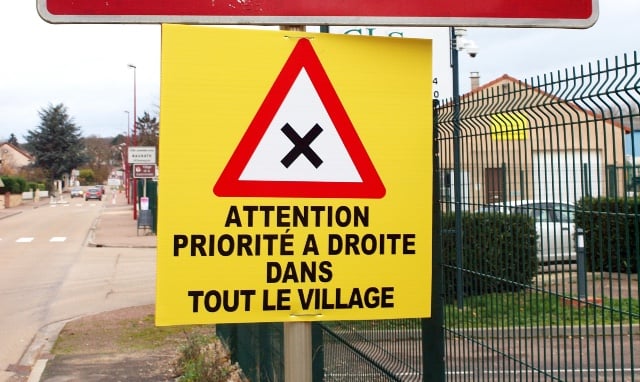 It's possibly France's best known driving rule, but it's also one of the most misunderstood.

When we asked our readers what they would ask if they only had one question about France, this rule was mentioned repeatedly. Danielle Proveddi requested: “Could someone please provide a clear, concise explanation as to when a driver has right-of-way to the right of your vehicle?”

The priorité à droite rule – or priority from the right – has a simple basis but some complicated applications.

Article R415-5 of the French highway code states: “When two drivers approach an intersection by different roads, the driver coming from the left shall be required to yield to the other driver, unless directed otherwise (by signage).”

This applies at all times – unless other signage is in place.

If there are road markings, other signage or traffic lights in place then you can forget about priorité a droite and obey them.

In practice this means that priorité a droite mainly applies in rural areas as cities and major roads tend to have their own signage and road markings.

So how do you know when it's priorité a droite and when it isn't?

There are a few clues to help you.

Here's the basic sign to look out for that tells you must yield to a driver arriving from the right at an upcoming intersection.

Yes it's an old one, but quite realistic for the type of sign you'll probably see on French roads, particularly in rural areas. And you might see a sign like this at the entrance to a village which warns you that priorité a droite is in place throughout the village. Or just something like this, which is a clear warning to all drivers entering the village that they need to be prepared and aware to hand over priority to vehicles entering from the right “unless directed otherwise”. Then there are road markings to look out for as in the picture below. Any vehicle entering this road from the right will be met with a stop sign, while the unbroken white line on the road also shows drivers on the main road that they have priority.

But the rule gets complicated when there are no road markings or signs, which is the case in small towns and villages but also in residential streets in cities like Paris.

In this case drivers need to be aware of vehicles arriving from the right and be prepared to stop to let them out – and that's not just for cars that are in motion. If a vehicle is stopped at the junction you are still obliged to slow down or stop to let it out, even though it might feel counter-intuitive.

Note that the priorité de droite does not apply for dirt roads that meet main roads, which you'll see many of in rural France.

Roundabouts in France can be little more complicated given that when you arrive at a roundabout traffic will be coming from the left.

To make matters worse France distinguishes between two type of roundabout: a rond-point and a Carrefour à sens giratoire, which are far more common now.

For a rond-point you are expected to give priority to vehicles entering from the right, even if you are on the roundabout. These are generally the smaller roundabouts, but this is also the case at the Arc de Triomphe roundabout in Paris (see video below).

There will be no signs or road markings at these kind of roundabouts.

But at a Carrefour à sens giratoire priority is given to the vehicles already engaged on the roundabout, so if you are arriving at the roundabout, you are the one that has to give way, which will probably feel more normal.
Each entrance to these kind of roundabouts will be marked with give way signs (cédez le passage) and road markings.
Tell me about the signs
The good news is that most of the time systems or signage is in place to decide who has priority such as:

Traffic lights – hopefully this is is self-explanatory to all drivers, but if the light is red – stop. And green means go!

Stop sign – again pretty obvious, but if you are on a road with a stop sign then you MUST stop (not just slow down but stop, otherwise a watching gendarme could pull you over), and only proceed when you are sure the route ahead is clear. Cédez le passage – A give way sign. You are not legally obliged to stop here if it is obvious that the way ahead is clear, but you do not have right of way and must give way to other vehicles – regardless of the direction they are approaching from.

This sign below also lets you know that you have priority. Motorway or dual carriageway sliproads – Because you are driving on the right you will also be filtering on to the motorway from the right, but that doesn't mean that you have the priority. The vehicle already on the road has priority, you should only join the route when it is safe to do so.

That's apart from the péripherique around Paris which has an automatic priorité a droite system meaning those entering the notorious ring road around Paris should have priority. The problem is many drivers either don't know this or blatantly ignore it, so getting on can be a struggle during rush hour.

Yellow diamond sign with a white border – this means you have the priority and you keep the priority until you see a 'priority cancelled' sign – which is the same yellow diamond but with a black line through it. The other major thing to beware of with priorité à droite is other drivers – especially older ones.

We don't want to be ageist here, but it is a fact that in some places, generally rural areas, drivers who have lived around there all their lives will frequently simply ignore any new-fangled signage that contradicts priorité à droite and continue to pull out from the right as they have done all their lives.

Just think of it as a good test of your reflexes while driving.

If you are caught failing to observe the priorité a droite, you could be fined up to €135 and docked four points from your driving licence.

Depending on the circumstances you could also face a possible driving ban, while if you are involved in an accident and it is found that you have not obeyed the rule, your insurance company will in all likelihood not pay out.

Arrête – stop. Although the word 'stop' is often used as well

Rappel – reminder, usually seen on warnings that speed limits are still in place

Sauf – except. So if you see a sign saying Entrée interdite sauf vélos that means it's no entry, except for bikes

Allumez vos feux – turn on your lights. If it's raining you should also turn on your headlights, and bear in mind that French motorways have lower speed limits when it rains – 130km/h normally or 110 km/h when it rains

Travaux  – every driver's favourite, roadworks. Bear in mind that roadworks on major routes will usually be accompanied by lower than usual speed limits

Déviation – diversion. If the road ahead is closed, follow the yellow déviation signs

Do you have a question about life in France or the French? Click here and we will do our best to answer it.