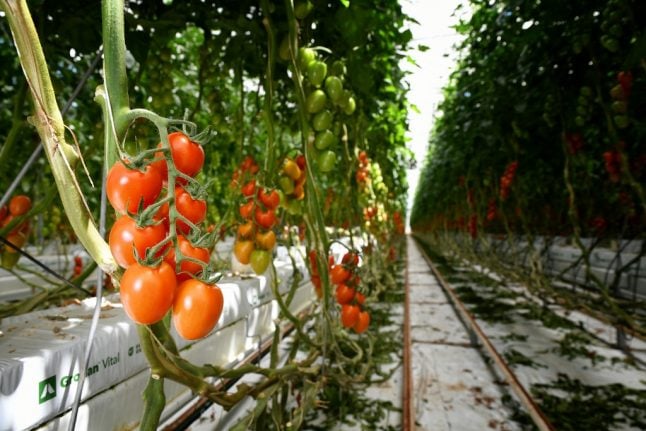 Hydroponics farm like this one in Tuscany could help grow vegetables more efficiently. Photo: Alberto Pizzoli/AFP

Southern Europe's biggest hydroponics farm is out to change all that, by growing pesticide-free crops in environmentally friendly greenhouses — and getting bees to do the hard work.

Set among organic vineyards in Tuscany, Sfera Agricola was launched in 2015 by Luigi Galimberti as a response to repeated UN warnings that food production will need to increase sharply to feed the growing global population.

“The UN reminds us every year that by 2050 there will be 10 billion of us, and we'll need double the amount of water and double the land to produce food for everyone,” Galimberti told AFP.

“Along with the problems of a suddenly-changing climate, which is having an ever-greater impact on farming, it pushed me to imagine a more efficient, technological way of farming that produces more with less,” he said. Hydroponics is a method of growing plants without soil, using water fortified with mineral nutrients and oxygen instead.

Galimberti's farm produces a kilogram of tomatoes or lettuce using just two litres of water, compared to 75 in fields, he says. Of those two litres, over 90 percent is collected rainwater.

It relies on natural organisms to control pests and disease, and the few plants that need to be treated chemically are separated and their fruit destroyed.

“We use bumblebees to pollinate the flowers, and we release a series of insect predators to combat the insects we fear,” Galimberti said, adding that it had led to the creation of new bee colonies in a boost for the local ecosystem.

Pickers shuttle back and forth on solar-powered platforms, delicately tying back the plants' upper branches as the fruit below ripens. Further on, vast basins shimmer in the midday heat where styrofoam boards holding baby lettuces are floated on a nutrient-rich, oxygenated solution.

As the company expands, it hopes to grow cabbages, spinach, courgettes, peppers and aubergines as well.

Galimberti tapped private investors and banks to raise the €20 million needed to open the 13-hectare greenhouse, which now employs 230 people and produces crops every day of the year.

The fruit dubbed “red gold”, destined for supermarket shelves around the world, is plucked in back-breaking conditions under a pitiless sun, for pitiful wages, largely by Africans who live in shanty towns.

The illegal dumping and burning of toxic waste, particularly in southern Italy, has also spooked consumers over recent decades, amid reports of contaminated farm produce and a sharp rise in cancers, malformations and birth defects.

The so-called “agro-mafia” business — the infiltration of organized crime along the agri-food chain in Italy, from pickers to distributors — is worth €24.5 billion, according to a July report by farming association Coldiretti.

“The exploitation of workers combined with exhausting conditions make picking in the south an ignoble job,” said Galimberti, who says his company's proper contracts and paid overtime are “a rare thing in the sector”. Sfera Agricola has bet on a return to the Italian tomato's glory days, producing three varieties that have fallen out of favour with farmers and distributors, but that the company is “bringing back to supermarket shelves”.

“Over the last 50 years, the market has evolved rapidly for distribution and commercial reasons. Tomato skins have thickened so they last longer on the shelf, and the fruit no longer drops off the vine when ripe,” he said.

Thanks to the cubes of rockwool — a hydroponic growing medium that mimics soil and supports the roots — “the plant is protected and we can use older, weaker varieties,” he added. Those have thinner skins and tend to fall off the plant when ripe, so they have to be picked and eaten relatively quickly, he said.

“But they do not have 'innovative' characteristics, which gives them a flavour advantage,” Galimberti said. He aims to build 500 hectares of hydroponic greenhouses in the next ten years, to become one of the biggest players in the sector in Europe.

But his toughest competition may be much smaller, and closer to home.

“In Italy almost everyone has someone in their family who produces their own tomatoes. Or their neighbour does, or the old man next door.”

Report by AFP's Ella Ide. All photos by Alberto Pizzoli for AFP.