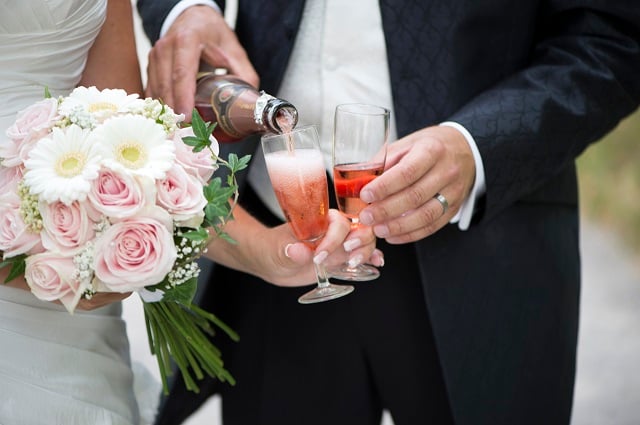 How do you get married as a foreigner in Sweden? Photo: Fredrik Sandberg/SCANPIX/TT

Who can get married in Sweden?

Most consenting adults in Sweden are legally able to marry there. There's no requirement to be a Swedish citizen or resident, meaning it's an option for a destination wedding, and it was one of the world's first countries to legalize marriage for same-sex couples back in 2009.

However, for same-sex couples where neither partner is a Swedish citizen or resident, at least one partner must have citizenship in a country where same-sex marriage or partnership is legal. You should also be aware that officiants from religious faiths, such as priests, rabbis and imams, are entitled to refuse to officiate same-sex marriages, although registrars who carry out civil services are not.

Why get married in Sweden?

Well, apart from the chance of a wedding in a beautiful rural setting, there are several practical reasons to tie the knot.

Many couples opt not to marry in Sweden, where the Cohabitation Act (sambolagen) grants several important rights to couples who live together.

The Marriage Code however does grant several extra rights, and crucially means there's some extra security in the event of any break-up or the death of one partner. For example, if a sambo couple breaks up, property bought for both partners to share are divided equally, but if a married couple divorce, this extends to many other items including cars, summer houses, and more.

Marriage also means that if the couple have a child, both parents are automatically granted custody; if a sambo couple want to share custody of any child they have, the parent who does not give birth must take the extra step of legally acknowledging their parenthood and then applying for shared custody.

One area where marriage will not make a difference is if one partner is a non-EU citizen hoping to move to Sweden to join the other. A marriage certificate isn't a criteria in eligibility for a partner visa to move to Sweden; instead, the key things migration officials look at are whether the couple have previously lived together and whether they fulfill certain criteria regarding income and size of apartment.

READ MORE: The difference between sambo and marriage in Sweden Which documents do you need?

The most crucial piece of paperwork you need is a marriage certificate. This can be obtained from the Swedish Tax Agency (Skatteverket), to which you first need to apply for a hindersprövning, which is proof that there are no impediments to the marriage. This means the agency will confirm both partners are over 18, are not currently married to someone else, and are not closely related to each other.

If one or both partners is not registered (folkbokförd) in Sweden, or in other words if they don't have a personal number, they will need to prove their identity and current (single or divorced) marital status from the relevant authority in their country of residence or citizenship. It's best to contact the Swedish Tax Agency directly to find out exactly which details you need to submit.

Once this inquiry is carried out, you'll get confirmation of this and, presuming no impediments were found, the wedding certificate (vigselintyg) itself.

The certificate is valid for four months from the date of issue, but can take some time to be processed, so it's usually recommended that couples apply several months in advance. You can download the form from the tax agency here (Swedish only) and find out more information about it (in English) here.

This is one of the first decisions to make once you've decided to get married.

Couples can either be married in a religious ceremony by an officiant from that religion (for example, a priest or rabbi) or in a civil ceremony, by an official who is appointed by the county administrative board. In order to get more information and book an officiant, you should contact the relevant authority, for example the Church of Sweden or the local municipality.

Sweden's Kammerkollegiet keeps a record of religious communities and approved officiants within each religion; any marriage carried out by a person without this approval is not deemed valid in Sweden. A full list of communities and religions which have been granted rights to carry out marriage ceremonies in Sweden can be found here.

When you speak with the officiant, you can discuss the plans for the wedding, including whether the service will be in English or Swedish (or another language altogether), how you want to do your vows and whether or how you will exchange rings.

Unlike some other countries, it's not possible for an ordinary person to officiate, although Swedish weddings typically include several speeches, so a couple's friends and family members have the option to be involved in that part of the ceremony.

Not a fan of planning? There are several possibilities for drop-in weddings across Sweden, with one of the earliest and most popular options offered at the open air museum Skansen in Stockholm. Couples simply need to bring their ID and hindersprövning, pay a fee, and can have either a civil or religious ceremony.

At the end of the ceremony, the officiant presents the couple with a marriage certificate (vigselbevis) to keep, and also fills out a proof of marriage (intyg för vigsel) to send back to the Swedish Tax Agency, which can update its records with the marriage. So there's nothing more for the couple to do, unless one or both partners chooses to change their name after the wedding. How much does it cost?

As in many other western countries, the average cost of a wedding in Sweden has increased over recent years as more and more couples opt for lavish ceremonies with open bars, extravagant dresses, and all the trimmings.

The hindersprövning is free, and in some cases it's also free to have the wedding ceremony itself. It's usually free to have a religious ceremony at a Swedish church if one or both partners is a member of the Church of Sweden. To find out about potential costs for other religious weddings, couples should contact the mosque, synagogue, or religious association which would be responsible.

Civil ceremonies are also usually free or subject to an administrative fee (which is often around 500 kronor or less), although the couple will usually be asked to pay travel expenses for the officiant if the ceremony takes place outside the city hall.