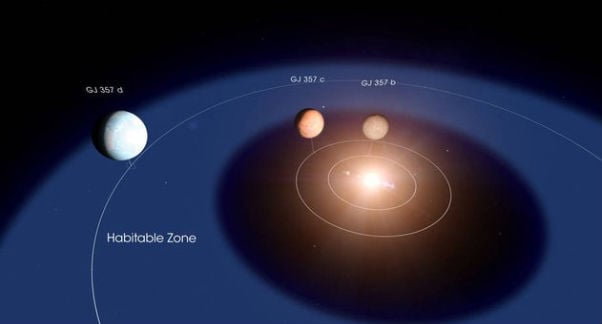 The discovery was also reported by NASA, whose TESS planet-hunting satellite made it possible.

The planet known as GJ 257d — the furthest away from the star — was particularly intriguing as researchers estimate it could be habitable. The other two are deemed too hot.

Signs of habitability in any planet include a rocky terrain, a size similar to Earth and a distance from their sun — the temperate “Goldilocks” zone neither too close nor too far — that allows the right temperature for liquid water, a key requirement for life.

Given its distance from its star, similar to that of Mars to our Sun, researchers estimate the planet has temperatures of -53 degrees Celsius (-63.4 Fahrenheit), Luque told AFP.

“That seems a little cold at first,” he said.

But “if this planet had an atmosphere (unlike Mars), it could retain the heat it receives from its star, and water could be liquid.”

Researchers also estimate GJ 257d could be roughly the same size as Earth or up to twice the size.

It is not the first potentially habitable planet to have been discovered close to us.

In 2016, the discovery of Proxima b at a mere four light years from the Solar System made waves.

But there is a hitch.

Proxima b and GJ 257d were discovered via so-called radial velocity, which involves looking for signs of a wobble in a star from the gravitational tug of an orbiting planet.

But Luque says the method is not precise enough to ascertain whether it actually is habitable.

As things stand, in order to measure its size, density and composition, the planet has to pass directly between its star and an observer, the so-called “transit” method, he says.

That has not been possible for Proxima b and other nearer potentially habitable planets, Luque says.

In the coming months, Luque and his team will be working to try and catch GJ 257d in “transit” to try and confirm it as a habitable planet.

“The probability that a planet passes in front of a star from our line of vision on Earth is pretty small,” he adds. 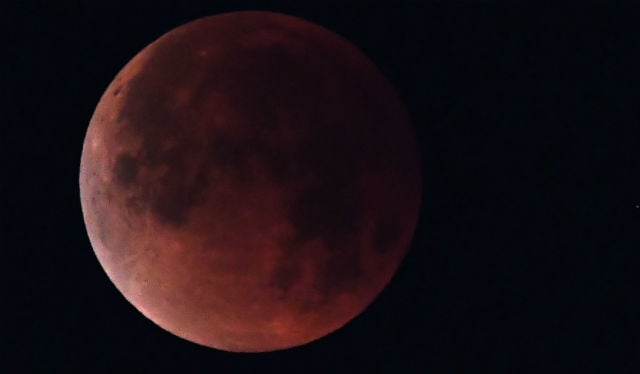 Illustration photo: A full moon and the Eiffel tower are seen in Paris on July 3, 2015. AFP
What will the eclipse look like?
In a lunar eclipse the moon appears darkened as it passes into the Earth's shadow.
During Friday's eclipse, the moon will gradually take on a reddish hue as it advances into the Earth's shadow and the colour will look “a little like when the sun sets on the horizon”, according to a spokesman for the French Association of Astronomy Clément Plantureux.
But it seems the exact shade of red that will appear is hard to guess.
“Dark red, intense or coppery, it's difficult to predict,” Pascal Descamps, astronomer at the Paris Observatory told BFM TV. “This red tint comes from a filtering effect of the Earth's atmosphere… so the intensity of the coloring will depend on the state of the atmosphere.”
According to NASA scientists: “The exact color that the moon appears depends on the amount of dust and clouds in the atmosphere. If there are extra particles in the atmosphere, from say a recent volcanic eruption, the moon will appear a darker shade of red.” Illustration photo: AFP
Why does the moon turn red in a Blood Moon eclipse?
The red moon is possible because while the moon is in total shadow, some light from the sun passes through Earth's atmosphere and is bent toward the moon.
While other colors in the spectrum are blocked and scattered by the Earth's atmosphere, red light tends to make it through easier. What time will you be able to see it?
In mainland France, the eclipse will be visible from 10 pm – 10.30 pm and it is expected to last until nearly 12.30 am.
“We have to wait for the moon to rise a little above the horizon to be able to see it, with the beginning of the eclipse taking place before the moon rises,” Descamps said, adding that in French territories such as Reunion Island in the Indian Ocean the whole of the eclipse will be visible from beginning to end.
In mainland France, however, “we will only see the end”.
And remember to try and catch the event as soon as you can because the moon will only be in a state of total eclipse until 11.15 pm when it will start to emerge and regain its normal appearance.
Those in the south of the country will be better placed to see the blood moon than those in Paris or the north.
“The beginning of the phase of total eclipse will be visible only in the east of a diagonal line that links Bordeaux, Paris and Lille”, said the site Sciences et Avenir.
So if you are Brittany or Normandy don't get your hopes up. Of course everything depends on the weather (see below). Illustration photo: AFP
How to get the best view
It's important to have a clear view of the horizon towards the south east, astronomers told the French press.
That means that if you're in Paris your best chance of seeing the phenomenon is to go to the top of the Eiffel Tower or Tour Montparnasse while those outside of the capital would benefit from leaving areas with forests or hills
But don't worry, even if you don't manage to find a perfect spot, you'll still be able to get a good view of the red moon as it rises in the sky.
If you're something of an astronomy buff it's probably worth investigating one of the 130 astronomy clubs in France which will be holding events for the public in honour of the occasion.
So, what is the weather forecast?
Naturally a lack of cloud will help with seeing the eclipse at its best so we've taken a look at the weather forecast.
Unfortunately for those in the north of the country storms are predicted while the east and most of the south  and south-east is looking clear. This was the latest weather forecast on Friday morning. Should I protect my eyes?
There's no need to take precautions when it comes to looking at the eclipse, scientists have said. In fact, it will be easier to look at than a normal full moon because it won't be as bright due to the lack of sunlight.
And you don't have to worry about having a telescope to get a good view, with astronomers saying that there will be a very good view without the need for special equipment.
SHOW COMMENTS
Url copied to clipboard!