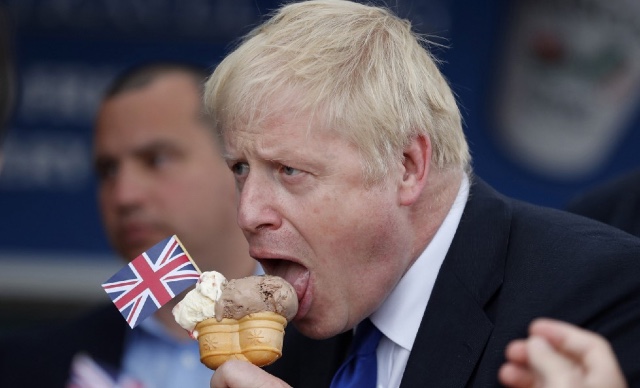 Some of the swiftest reaction to Johnson being named as the new Conservative Party leader came, as you might expect, from Brussels – where EU negotiators are no doubt waiting tensely for his first appearance.

In a statement timed to coincide with Boris Johnson’s election announcement Frans Timmermans, the European Commission’s first vice president, said that the EU would not renegotiate the Withdrawal Agreement.

“He [Boris Johnson] took a long time deciding whether he was for or against Brexit and now his position is clear,” Mr Timmermans said.

Johnson has provocatively promised to withhold the payments owed to the EU as part of the UK's divorce unless Brussels agrees to renegotiate the Withdrawal Agreement.

But the EU has repeatedly said it won't open Theresa May's Withdrawal Agreement for re-negotiation.

EU Commissioner Vytenis Andriukaitis was more scathing of Johnson – writing a blogpost in which he accused him of dealing in “cheap promises and simplified visions” to suit his own aims.

“We look forward to working constructively with Boris Johnson when he takes office to facilitate the ratification of the Withdrawal Agreement and achieve an orderly Brexit,” said Barnier.

The incoming European Commission president Ursula von der Leyen, who was in France having a working lunch with French president Emmanuel Macron at the Elysées Palace, congratulated Johnson, but warned they had “challenging times ahead.”

She said: “Congratulations to Boris Johnson for being nominated as prime minister. I am looking forward to having a good working relationship with him.

“There are many different and difficult issues to tackle together. We have challenging times ahead of us.”

Macron added: “I congratulate Boris Johnson and I will call him when he is officially prime minister.”

“I want very much to work with him as quickly as possible and not just on European subjects and the continuation of negotiations linked to Brexit, but also on international issues on which we coordinate closely with Britain and Germany… like the situation in Iran,” he added.

In France, a country that Johnson has loved to bash in the past, the reaction was far from flattering in much of the mainstream media. Leftwing daily newspaper Libération describes him as “a liar, self-centred, obsessed with money but appreciated for his eccentricity and self-derision, the former mayor of London, who became a Eurosceptic to stand out from the crowd” in an article headlined 'Boris Johnson, future Queen's jester'.

Meanwhile Le Monde – the heavyweight French daily paper known as the newspaper of record – has republished an editorial simply saying “Boris Johnson leading the UK? No thanks!”

Radio station France Info is equally unsparing, while conceding that Johnson is “certainly very clever” they describe him as someone who has “a history of incompetence and is known as a buffoon”.

LCI TV channel were more concerned by the potential alliance between Johnson and US President Donald Trump which they described as “unwanted”.

“Should we be scared of Boris Johnson?” LCI asked.

The TV station pointed out that Trump and Johnson had much in common, including the fact they were both born in New York, both have bad hair cuts and both have been accused of racism recently and of pushing fake news and lies in the media.

In Germany there was hardly an outpouring of relief at the announcement.

In a commentary piece for Deutsche Welle, Christoph Hasselbach described him as a “rogue” and a “foreign object”, saying German politicians are “stunned by the Boris Johnson phenomenon”.

Hasselbach said Theresa May came from a similar political world as German politicians where reasonable compromises are sought.

“Boris Johnson is the antithesis, and he makes Berlin politicians as speechless as Donald Trump,” he said.

Hasselbach wrote that Johnson’s plan for Brexit “will of course go wrong and Britain will remain isolated and impoverished”.

“There is no doubt about that in Germany and they are looking forward to the moment when Johnson and the misguided half of the British population will see exactly that,” he added.

READ ALSO: 'He looks like he slept in his car' – What Danish media are saying about Boris Johnson

Danish public service broadcaster DR, in an article published earlier this month, described Johnson as a politician who “very much splits opinion”.

“The politician with the yellow haystack on his head has made enough gaffes throughout his career for newspapers to make list articles about it,” said the broadcaster

In the Conservative daily Berlingske Johnson was described as looking “like a man who has slept in his car, with his crumpled jacket, messy blonde hair and general disorder, and that’s his style.”