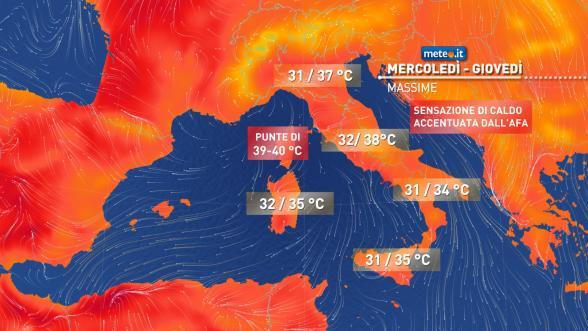 Italy is set to experience yet another heatwave, with temperatures expected to be in the high 30s across most parts of of the country in the coming days.

Temperatures across the country rocketed over the weekend, as “a mass of hot air from Africa” moved in over Italy and southern Europe, according to Meteo.it.

But things are set to get much hotter from Tuesday onwards.

While we're bracing ourselves for prolonged stickiness, we can take some consolation in the fact that forecasts say this heatwave will be slightly less intense than the last one, in June, when much of the country sizzled in temperatures above 40C.

“The heat will be intense but it probably won't reach the extreme temperatures of the June heatwave,” Meteo.it wrote.

Where will the heat be most unbearable?

Although much of Italy will melt under the sun in the days to come, the north western regions will again will bear the brunt of the heatwave, with temperatures of above 40C possible in these regions on Wednesday, Thursday and possibly Friday.

Temperatures in the southern mainland will be comparatively mild, with highs of 34 degrees predicted for Puglia and Calabria for most of the week.

Intense heat and humidity is predicted across a large part of the Po Valley, where between ten and 30 percent of crops were devastated during June's heatwave.

The mercury could hit 38C in Rome and 39C in Florence by Wednesday, meteorologists have warned.

And there will also be “extreme heat points” in inland areas of Sardinia, Tuscany, and Umbria.

When will it be worst (and when is it over)?

Though it's already pretty hot in much of Italy, the heat and humidity is predicted to be most intense from Wednesday to Friday, cooling down slightly at the weekend.

Scattered thunderstorms around the western Alps are predicted from the early hours of Saturday morning, with hail and strong winds.

Stormy weather will spread through the north and centre-north over Saturday and Sunday, and while forecasters say there is a chance of severe storms similar to those seen after the last heatwave, they would be “brief and very localised.”

Temperatures are expected to drop by around five degrees by Saturday – just in time for Italy's first “mass exodus” of the summer. The last weekend in July is traditionally when many Italians head for the beaches and begin their summer holidays.

Luckily for anyone heading for the beaches in the south and the major islands, these areas will avoid the stormy weather. Here clear skies, sunshine and high temperatures are predicted to continue over the weekend, with temperatures slightly lower on the coast.